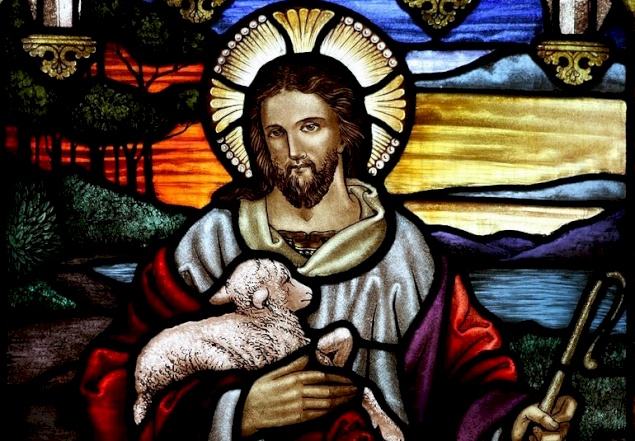 Meditation of Archbishop Pizzaballa: Fourth Sunday of Easter, Year A Available in the following languages:

Fourth Sunday of Easter, Year A

The similarity of the good shepherd, which we find in this tenth chapter of the Gospel of John, is very rich and developed.

In fact, Jesus does not only compare himself to the “good shepherd”, a figure that has many references in various passages from the Old Testament; but He also compares himself to the “gate”, and uses the image several times also in reference to the shepherd, who enters the sheepfold by the gate.

The gate is what creates a connection, a passage between two places that would otherwise remain isolated from each other. And it is the image of human reality after the fall, after the drama of sin: humanity had become inaccessible, far from God, a world unto itself, unable to connect with the world of God; unable to listen.

Verse 6 speaks exactly about this: “Jesus used this figure of speech, but they did not realize what he was saying to them.” Jesus speaks, but the listener does not understand, it is like being locked inside a pen where nothing can enter, nothing can breach. There is no gate.

Jesus enters this closed sheepfold through His Incarnation and His Pasch.

He does not remain outside the sheepfold, and neither does He enter by some other way: He becomes one of us, He enters legitimately the world of humans, assumes our entire story, our wound. Jesus reopens the gate.

And precisely because He does this, He becomes the gate: that is, he becomes that new possibility, offered to man, to step out of himself, to go beyond death. Because without this gate, which is Jesus, the only way to get out from the fold would have been to die

Death had passed itself off as an alternative to the shepherd, and humans listened to it, followed it. Psalm 49 (48) describes well the situation of the man who has “death as his shepherd” (v. 15): it is the condition of those who trust in themselves, that is, those who know no one else to rely on, none to listen to, except himself. For them, says the Psalm, there will be nothing left, because death is the thief, the robber who came to steal, kill, destroy (Jn10: 8). It steals man’s life and takes it with him to nothingness.

Jesus, by entering the fold of humanity doomed to death, by facing death Himself, brings life to it: humanity is no longer locked within the fold but is free to enter and free to exit. In fact, Jesus says: “I am the gate; whoever enters through me will be saved and will come in and go out and will find pasture.” (Jn 10: 9).

Therefore, humans now have another gate, which does not offer death, but life, the very life of God.

For this and only for this is Jesus the Good Shepherd, not only because He enters, but also because He goes out, and because, going out, He brings humanity with Him. We could say that with His Incarnation Jesus enters the sheepfold of humanity, and with His Pasch, He brings the sheep out, leads them beyond, opens a door on life for them.

But how is it possible to follow Him? What does it mean to enter through the gate that He himself has become, to follow Him as a shepherd? How are people free to enter and exit by this gate?

The gate that gives us access to all this is Baptism, our immersion in the Life of the Lord.

It is, therefore, a question of living the life of Baptism, what Baptism means, that is, being immersed in the Death and Life of Jesus.

There is no other door than this, being constantly immersed in the Pasch, letting what is old die, so that new humanity may rise, one made in the image of the Lord, capable again, by grace, of listening to His voice, of dialoguing with Him, obeying His desire of Life for all.