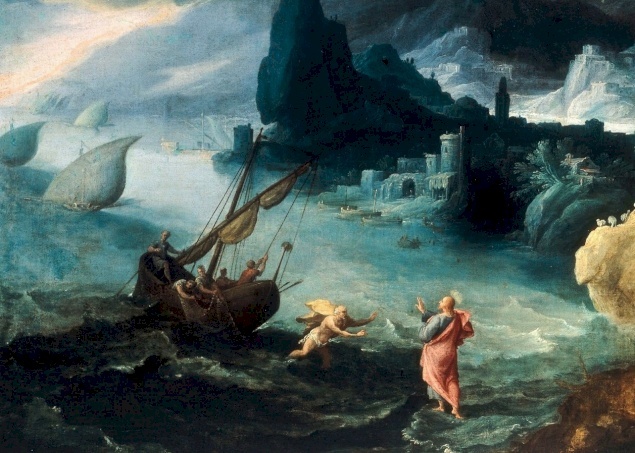 Meditation of Archbishop Pizzaballa: XIX Sunday in Ordinary Time, Year A, 2020 Available in the following languages:

The first is the Exodus event, which forms the background to this chapter 14 of Matthew that we began reading last Sunday, with the account of the miracle of the multiplication of the loaves and fishes. Many elements recall the two biblical passages. In both, there is the desert, where the people journey, where they experience famine and need for food, but also Divine providence which nourishes His children.

Today we also find the element of the sea, which in the Exodus represents the first obstacle for liberation from Egypt and the consequent possibility of concluding the Covenant and entering the promised land. At the same time, in Matthew 14, it poses an obstacle to the disciples, whom Jesus ordered to precede him to the other bank. The sea is rough, and the strong wind pushes the boat back, preventing the disciples from reaching the goal.

There is a difference: in Exodus, Moses, obeying the command of God, opens the sea so that the people can cross dry. Other prophets will repeat this gesture. In the Second Book of Kings, for example, the prophet Elijah opens a passage in the River Jordan (2 Kings 2:8), in a way that he and his disciple Eliseus can wall over dry.

Jesus instead does not open the sea but walks on it (Mt 14:25); that is, he dominates it. He is the Lord of it. That does not concern only Him: also, the disciples, in this case, Peter, can do the same. He does it not by his strength but, as we will see, in obedience to Him, who calls him to participate in His power.

We draw the second element going back to the Gospels of previous Sundays. The words of the treasure and the pearl led us to understand that the Kingdom of God happens when we can find, can see what is hidden, what does not appear on the surface. Last Sunday, the treasure was hidden in a few loaves and fishes, which someone made available and which, brought to Jesus, became capable of feeding a large crowd abundantly.

And so also today. Jesus walks on water, and that event invites the disciples to look carefully.

Initially, they think they see a ghost; what they see is so unlikely. But then, the disciples go further.  They join the gesture of walking on the lake to the Word that Jesus proclaims, which reveals who this man truly is, “It is I” (Mt 14:27). Fear ceases and allows room for surprise, trust, and finally, the boldness of Peter, who feels he can also walk on the sea.

Peter is the protagonist of this passage. Only the evangelist Matthew tells this critical detail, which sees Peter leaving the boat to walk towards Jesus on water, and then risk sinking.

Perhaps this is what the evangelist wants us to achieve.

Peter, as we said, does not do this thanks to his abilities. His strength lies totally in his relationship with Jesus, in the dialogue he has with Him, in his gaze capable of seeing in Jesus the Lord victorious over evil and death. In a word, in his faith.

The sea does not disappear, and it is not possible to walk on it dry. It is necessary to face the violence of the waves and the wind that always accompany every crossing, that accompanies the whole life of the disciple.

When this faith breaks down, one finds oneself alone in facing the power of evil. He is left to his strength and experiences how insufficient, unsuitable it is.

That, too, is a daily experience, which accompanies each of our crossings.

But it does not end there: right there, real prayer begins, the kind that entrusts oneself to the Lord without reservations: “Lord, save me” (Mt 14,30). And Matthew says that immediately Jesus reaches out and grabs Peter.

Perhaps, only when we look at death in the face, when fright takes over our lives, only then does our cry rise in all its truth.

And at that moment, in a new way, we experience that the Lord saves us.