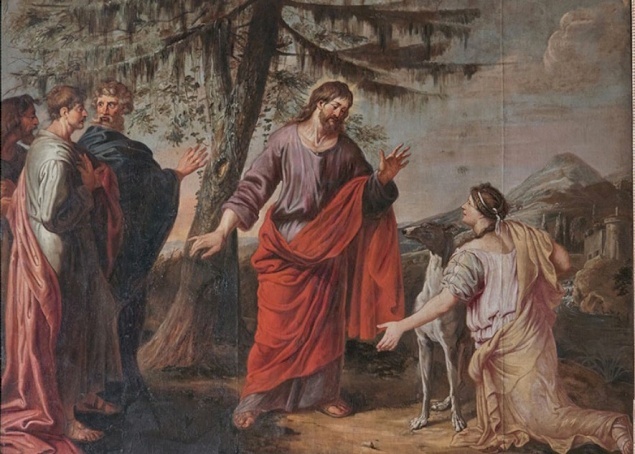 Meditation of Archbishop Pizzaballa: XX Sunday in Ordinary Time, Year A, 2020 Available in the following languages:

We recently saw the hunger of a large crowd (Mt 14:13-21), which Jesus satisfied by distributing to all a few loaves and a few fishes, and from the food distributed, there were leftovers to fill twelve baskets. Today, also, (Mt 15:21-28), we see a hungry person, a Canaanite woman who was approaching Jesus in pagan territory.

The evangelist Matthew points out with some repetition – to tell the full importance – that the episode takes place outside the borders of Israel: Jesus leaves and heads to the area of Tyre and Sidon and a woman who came from that region turned to Him (Mt 15:21-22).

Mark (Mk 7:26) describes her “of Syro-Phoenician origin,” while Matthew uses the term Canaanite which, in Biblical history, was used to designate historical enemies of the people, foreigners par excellence.

This foreign woman approaches Jesus with a plea as precise as it is urgent: “Pity me, Lord, son of David! My daughter is very tormented by a demon,” and addressing Him, she uses, a messianic title that is uniquely Jewish.

This woman decisively enters the life of Jesus, immediately breaking historical and well-established borders, entering a place that, to her, would be precluded and prohibited.

But, initially, Jesus raises the barriers and imposes order in the boundaries.

The episode of the multiplication of the loaves and fishes shows that it was the disciples, from the first moment, that wanted to dismiss the crowd because the need seemed excessive to them who had so few provisions. And the verb used by them to tell of this dismissal (Mt 14:15) is the same that Matthew uses to speak of the repudiation a man employs in divorcing his wife (Mt 5:31).

As to say that had Jesus followed their counsel and dismissed them, in reality, it’s as if he had in some way favored or directly caused the break-up of a marriage, the breaking of the covenant.

But Jesus came not to interrupt weddings, but to carry them out: He is the groom.

Today, the scene takes a different perspective. This time it is Jesus pulling back, redefining the scope of his action only within the confines of His people, redefining the list of wedding guests, from which there is someone who remains outside.

There is, however, in front of Him, a woman determined to enter, in any manner, the wedding feast. She is sure that at this banquet, there is bread for all, also for her.

She asks Jesus to enter her life, in that of her sick daughter, and to do what He came to do for all: that He bring life and salvation.

And Jesus gets involved.

We could say that this time, it is He who must make a crossing, a passage, an opening.

And He does it by simply listening to the universal language of pain, the one that makes you bold. He does it by looking more closely, and by seeing in the heart of the woman that great faith (Mt 15:28) which He looked for so often in vain within the borders of Israel, even in places where He did the more significant part of His miracles.

And if, as we said, the Kingdom happens when we can see the hidden good as a treasure in the land of history, today it is Jesus who makes this discovery. He discovers the treasure of faith is also hidden outside the borders of Israel, and He finds it.