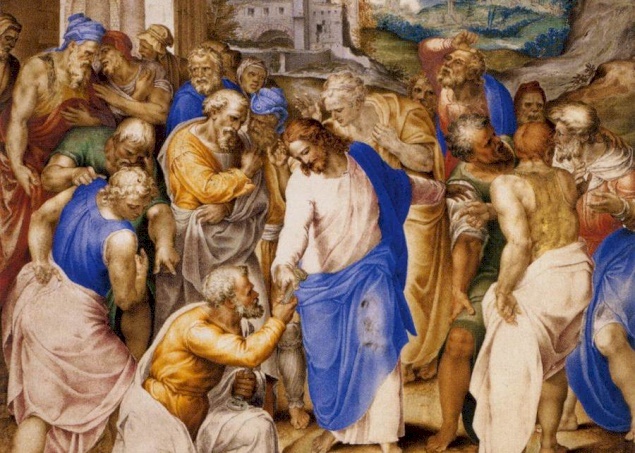 Meditation of Archbishop Pizzaballa: XXI Sunday in Ordinary Time, Year A, 2020 Available in the following languages:

Let us try to read the passage of today’s Gospel (Mt 16:13-20) in the context of the chapters that preceded it, of this section that some Bibles rightly entitle “the boundaries of the Kingdom.”

We saw, for example, last Sunday, when Jesus went beyond the boundaries of Israel and encountered a Canaanite woman, who forced Him in some ways to expand the official spaces of the Kingdom of God to make it accessible to every person.

To be more precise, the question concerns not the innovation in a generic sense, but the relationship between innovation and tradition. It is important to recall two steps in this regard.

The first is at the beginning of Chapter 15, where we find a diatribe between Jesus and the Pharisees about tradition. And there, Jesus answers the Pharisees in saying that a tradition that is incapable of listening and opening itself always to the newness of God, which reveals itself in everyday life become dumb and blind. It is like a plant that, not being planted by the Father, will be uprooted (Mt 15:13): it no longer bears fruit, it serves no purpose.

The second is at the beginning of Chapter 16, when the Pharisees and Sadducees approach Jesus to ask of Him a sign from heaven. Subverting the discourse, Jesus responds, inviting them to interpret the signs of the time and recognize what’s happening before their eyes.

We arrive then in today’s Gospel.

There is what the people say about Jesus. Everything is about the past, more or less recent: Elijah, Jeremiah, John the Baptist (Mt 16:16).

Then there is Peter, who, instead, opens to the revelation of the Father, and he welcomes the total novelty of which Jesus is the bearer.

Peter is blessed because he is part of that group of little ones (cf Mt 11:25-27) who open to the revelation of the Father. He keeps the Kingdom mysteries hidden to those closed in their knowledge and the certainty of their traditions. He reveals them to the poor, to those who are thirsty for life.

Like the Canaanite woman of last Sunday, Peter speaks from the heart, where faith is born that is always a little foreign, a faith that goes beyond us because it was revealed to us by Someone else.

In this contest, it is vital to interpret the name-change imposed on Peter. More significant than the two names (Simon the old one and Peter the new one), the name must be changed because it symbolizes death and rebirth.

To access the revelation that Jesus carries in Himself, namely that the living Song of God was made man, a radical change of perspective is necessary. Peter must, in a certain sense, die and be reborn. He cannot stay the same.

The traditions, interpreted in the manner of the Scribes and Pharisees, tend to leave everything unchanged, fixed; the revelation of Jesus sets in motion, generates life, and transforms existence and relationships.

And the fruit of that transformation is the vocation to be part of the Church. Peter dies as an individual and is born as part of the Church: “And so I say to you, you are Peter, and upon this rock, I will build my Church, and the gates of the netherworld shall not prevail against it” (Mt 16:18).

A Church that will not be Peter to build and to save, but Jesus Himself and from whom Peter will have the keys, together with authority to “loosen and bind” (Mt 16:19).

The expression used “to bind and to loose” recalls different Old Testament meanings. One of the most common is ‘permitting’ and ‘prohibiting.’ They also concern the interpretation of the Mosaic Law.

So, remaining in the logic which we heard in this passage, we could say that the task of Peter will be that of defining the boundaries of the Kingdom, just as Jesus did.

And he will be able to do it, not by beginning from his upright fidelity, in the manner of the Scribes and Pharisees, but from the experience of mercy.  Mercy that the Lord will show him every time that Peter will forget that flesh and blood will not keep him united to the Lord, but the faith of the humble, to whom the Father reveals the Son.