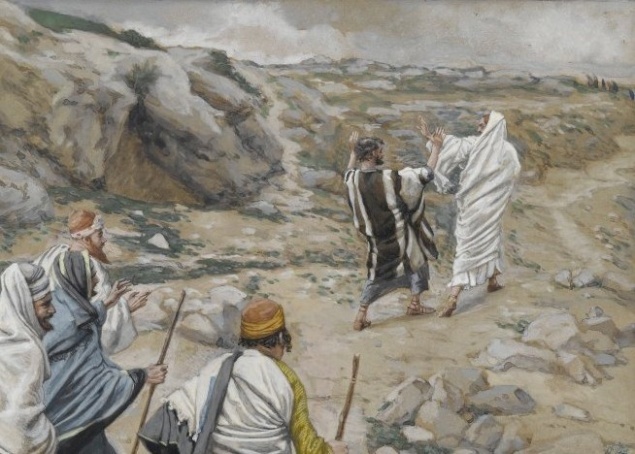 Meditation of Archbishop Pizzaballa: XXII Sunday in Ordinary Time, Year A, 2020 Available in the following languages:

To enter this passage from the Word of God today (Mt 16:21-27), we let ourselves be helped by three adverbs of time that we find dispersed among its verses.

The first is found immediately at the beginning, in verse 21, in which we read that “from that moment Jesus began to explain to his disciples that ...”
This expression, “from that moment,” in Matthew is ordinarily never only a simple conjunction but instead marks a transition, a change, an event that stands as a watershed.
From that moment, something changes.

In particular, we find the identical Greek expression (apò tóte) in another passage of Matthew, in chapter 4, verse 17: we find ourselves immediately after the episode of temptations, and Jesus, learning that John was arrested, retires to Galilee, then leaves Nazareth and goes to live in Capernaum. And, from that moment, Jesus began to preach, inviting His hearers to change their way of thinking, because the Kingdom of God is near.

Well, we find something very similar today.
Peter has just openly declared his conviction that Jesus, his teacher, is not a simple prophet, but the Son of God himself. Thus, showing that he has deeply intuited something of His mystery. And Jesus, from that time, accompanies His disciples in a further passage in their knowledge of the mystery of Christ, of the mystery of the Kingdom.

He did not recognize it immediately, but from that time, from the moment it was necessary to avoid the temptation and illusion of a strong and powerful Messiah, just as Jesus himself had to do when the devil tempted Him. From that moment, Jesus announces that the destiny that awaits Him will be the destiny of every man, marked by death and pain. He announces that His being the Son of God will in no way allow Him to avoid hostility, rejection, suffering, death.

And just as at the beginning of his mission, from that time on, Jesus invites us to change our mentality, to ponder the mystery of God. He does this with Peter and the other disciples in this moment of change. From this time, the disciples had to take into account that their Master will have the same fate as the suffering servant.

We find a second temporal expression in the words of Jesus to his followers: Jesus will have to suffer much, be crucified, and rise again on the third day (cf. Mt 16:21).

Which passage?
It is the passage in which we emerge from a dramatic, desperate situation that seemed to have no way out. This turning point, of salvation, never happens immediately, on the first day, but always on the third, when it is evident that it is not man’s ability to generate this turning point, but only the Lord, his grace.

So we could say that the first step that the disciples are called to make is that of the cross, of that mystery by which God chooses to save us by going to the end in loving us, without withdrawing. But we cannot stop there, and there is another step to take, the one that discovers that right there, after that moment, there is a third day, where life is restored to us.

Finally, there is a last adverb of time, and this time it is Peter who pronounces it. Peter tells Jesus that this will never happen to him (Mt 16:22).
Peter wants to avoid to Jesus what can happen to him from that moment.
But in doing so, he does not allow him to enter the third day, and to experience the salvation that comes from the Father, to find life (Mt 16:25).

The opposite of “never” is “always.” Man would often be tempted to say never, to avoid everything that he does not like, that is scary, to avoid life.

The adverb of God, on the other hand, is always, every time, every day.
Every time we lose our life, the Lord makes us find it. And thus, the Gospel of Matthew concludes: “I am with you always, to the close of the age” (Mt 28:20).