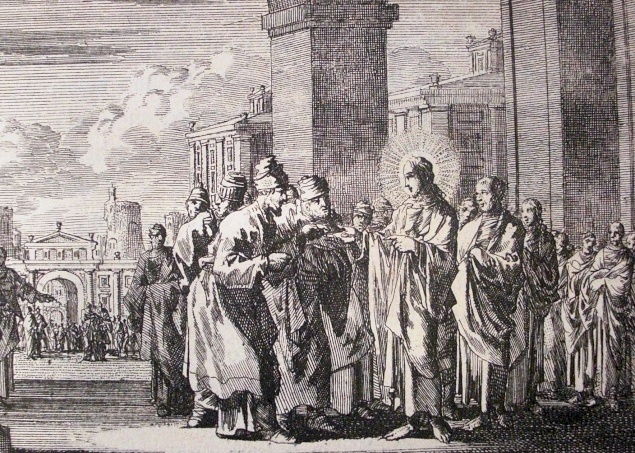 Meditation of Archbishop Pizzaballa: XXIX Sunday in Ordinary Time, Year A, 2020 Available in the following languages:

Concluding the three parables that we heard in recent Sundays where Jesus arouses His listeners to reflect on their closed hearts in facing the Kingdom of God, which has drawn near, the Pharisees do not give up. They look for a way to put Jesus in difficulty to find some excuse to accuse Him.

Today’s passage begins a series of discussions between Jesus and His opponents that will cover the entire chapter 23 of Matthew. After today’s episode, we find a dispute with the Sadducees (Mt 22:23-33), that with a doctor of the law (Mt 22:34-40) and finally again with the Pharisees (Mt 22:41-46). The subjects covered are the most diverse, but in some way, they concern all the questions of the interpretation of Sacred Scripture.

In today’s Gospel passage (Mt 22:13-21), we see that the Pharisees sent their disciples to Jesus, together with the Herodians, to interrogate Him regarding the payment of taxes. And after a useless and somewhat ridiculous flattering premise, make the question explicit: Is it lawful to pay the census tax to Caesar or not? (Mt 22:17).

The subject, apparently simple, is particularly thorny, and it touches on different questions.

The first, as we said, is the interpretation of the Law. The interlocutors approach the question by asking if it is lawful or not to pay taxes, namely if the Law permits it or not. We find the same vocabulary in Mt 14:4 when John the Baptist says to Herod that it is not lawful to take the wife of his brother.

The second reason why the question is thorny depends on the fact that it concerns money, always a delicate question, even in the time of Jesus.

And the third reason lies in the realm of politics, and that in a people enduring foreign occupation.

Therefore religion, money, politics. Three delicate elements in themselves and more sensitive when placed together.

How does Jesus respond?

It seems that Jesus answers by saying that there are three modes of being in the world.

The first is to give Caesar an absolute power, to pay taxes by considering him a deity. In effect, the diffusion of coins by the Romans with the effigy of Caesar in the territories of the Empire was a way not only to exercise dominion but also to favor Emperor worship.

The second is not to give Caesar any power, not to recognize him, and therefore not pay the census tax, breaking the law and fomenting the revolution.

And there is a third way, one that recognizes in Caesar the power he has over affairs, and in God the power He has over life, knowing that they (Caesar and God) exercise power in a very different way.

That is just what the priests, the Pharisees, and in general, the leaders of the people will do when to put Jesus to death, they will use the power of Caesar and will put Jesus in the hands of that power that now causes them so many problems.

The real revolution is the inner freedom of those who know that their life comes from God and put it back into His hands.  Therefore, they do not fear any temporal power, not even the violent one of foreign occupation, because those who are free know that no one has control over life, except the one to whom we give the ability to have it.

The temporal power, even when it was a benevolent power, cannot be the ultimate horizon of man, his everything: it does not give life, and in the end, it cannot even take it away, unless we are the ones who give it the power to do so, giving up our freedom.