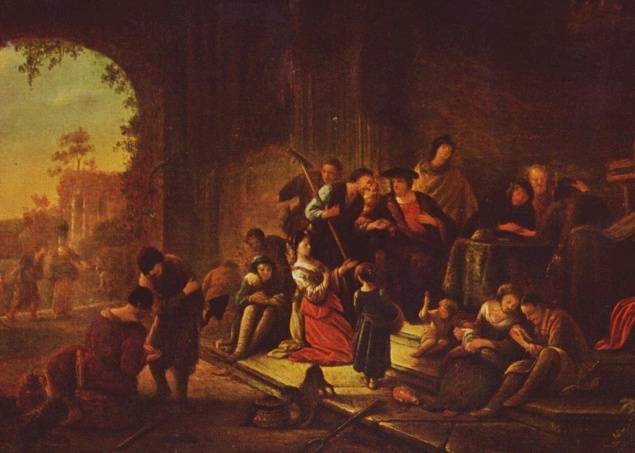 Meditation of Archbishop Pizzaballa: XXV Sunday in Ordinary Time, Year A, 2020 Available in the following languages:

On this Twenty-fifth Sunday in Ordinary Time, we hear a parable that is not easy to "digest." It invites us, like that of last Sunday, to enlarge the spaces of the heart, to make ours the reasoning with which God thinks and acts, a logic that always surprises us, which at times annoys or shocks us.

Today's parable (Mt 20:1-16) is that of the master who goes out at different times of the day – from dawn until late afternoon – to hire workers to work in his vineyard. With the first ones, there is mutual agreement on the day's wage, with the others not so. And, at the day's end, all receive the same salary, the amount agreed with the workers sent to work early in the morning.

Dwelling on a few elements, let us ask ourselves from questions.

The first discordant element is precisely the money, given to everyone indiscriminately, regardless of the hours of work, fatigue, heat. We ask ourselves:

Does the owner of the vineyard care about the work of his workers? Why does he seem not to give any value to the effort of the first ones and their faithfulness? We could say that the owner cares very much about their work, but he cares much more about something else. He is interested that everyone, sooner or later, will have the essential experience necessary to enter the logic of the children of the Kingdom. It is the experience that in the Kingdom one enters, not based on one's merits, one's ability, one's fidelity. Those are good realities, but on their own are not sufficient to make us taste salvation because it consists of an encounter with the mercy of the Father. An experience that everyone, sooner or later, we are called to have, beyond our good works.

From what has been said so far, a second question arises. Could the owner have paid his workers in another manner? Could he have reimbursed them according to other criteria more in keeping with human justice? Seemingly not, if the owner described in the parable is the Father.

God gives everyone the same because He offers everything to everyone. We are not paid for the work we have done, but we are loved for who we are. And since we are children and not slaves or even workers, what we are entitled to is much more than what we deserve.

That to which we are entitled is free participation in a life that is a gift, that is mercy.

The Kingdom is not a reward given based on one's merits but is a gift given to anyone who recognizes they need it.

The parable, however, does not stop at saying this. At a certain point, it raises a question, a dilemma, by those hired at the beginning, not those later (Mt 20:10). The former workers are unable to accept the possibility of being paid as those who worked less than they did.

The first-hired, however, did not receive less than was agreed at the beginning; they did not suffer an injustice; they received what was just; they received a salary. Where, then, is the problem?

The problem then is that the differences between the former and the latter were abolished. We could say that the differences between good and bad, between just and unjust, between observers and transgressors, between faithful and infidels, between near and far, between elect and pagans have been abolished.
That is the dilemma, and it is there that Jesus wants to lead his followers to see that we can enjoy what has been given to us only if we know how to accept that it is also given to others, to everyone, without distinction, only if the idea is accepted that it is a gift, not merit.

If instead, one carries in one's heart the suspicion of being at least a little better and therefore deserving something more, then one loses everything one has, just as in last Sunday's parable (Mt 18: 21-35).  There, we saw the forgiveness that was given is rendered useless by the servant's inability to share it with his brothers.
Like last Sunday, we lose first of all the relationship with the Lord, who gives and can do nothing else. He does it equally with everyone, without making any differences.