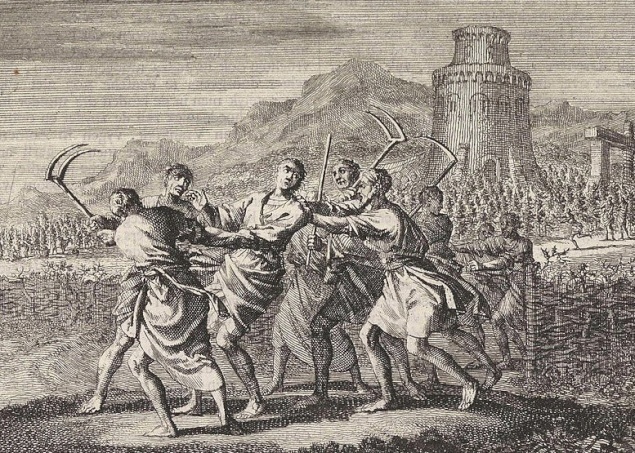 Meditation of Archbishop Pizzaballa: XXVII Sunday in Ordinary Time, Year A, 2020 Available in the following languages:

Today, we listen to the second (Mt 21:33-43) of the three parables that Jesus narrates in the Temple to the leaders of the priests and the elders of the people (Mt 21:23) after His solemn entrance to Jerusalem.

Jesus recounts that a man plants a vineyard in his field, leases it to some tenants to cultivate it, make it bear fruit, and then he goes on a journey. When the vintage time draws near, he sends his servants to obtain his produce.

Let us pause here, first of all, because these first verses tell us some important things about God’s way of acting.

We could say that God gives and asks, and that love cannot be any other way, a loving and waiting to be loved in return.

One can reinterpret the entire salvation history by starting from this exchange or, perhaps better, from this desire of God, Who always waits for His love to be reciprocated. And He often waits in vain.

God awaits signs that reveal what is in man’s heart; He awaits signs that tell man’s recognition of the gift received, of thanksgiving to the One who first donated. Signs that man does not stretch his hand to the fruit of a tree, that he rests on the sabbath day, that he bears the memory of the covenant in his body, that he lives the gestures of the festive rites. They are always small things, full of meaning.

Faced with this expectation, God is vulnerable: He can only wait.

It certainly sends signs that remind man that, if he wants to stay in the covenant relations that God has offered him, he must make his step, his gesture; but he does not demand it.

Everything hinges on trust, and it is a trust that, in narrating the parable, grows and seems incredulous faced at the possibility of not receiving the expected response.

Indeed, finally, he sends his son and puts him in the hands of those whose violence and rejection he has already known.

He sends him as a sign of renewed trust, as a new possibility offered to the vine growers. And he sends him with the hope that He, the Son, will be able to gather from their hands that gesture of love that He expects from them, that sign that makes them trustworthy, authentic persons.

The parable says that this does not happen and that the Son suffers the fate of all the others. The workers do not recognize him as the Son of the Owner of the vineyard. But then the parable does not end there.

Paradoxically, just the sacrifice of the Son will be the answer so awaited, what finally restores to the Father the fullness of the hoped-for fruits.

The Son loves the vineyard of His Father so much that He gives His life for it, and that changes history, it signals a transition. Christ is the mature fruit that the Father was always awaiting; the fruit finally returned to His hands.