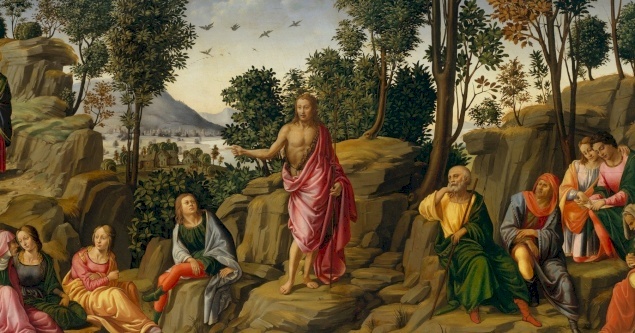 Meditation of Patriarch Pierbattista Pizzaballa: Second Sunday of Advent, Year B Available in the following languages:

Second Sunday of Advent, Year B

Last Sunday, we saw the relationship between the Lord and history. In a certain sense, we find it also today. The first word with which the Gospel of Mark (Mk 1:1-8) opens is “arché,” which means start, beginning, foundation. The word that opens the first book of the Bible, Genesis, with the creation account.

The Evangelist Mark does not use this word randomly: he wants to say that what he is about to report is a beginning, a new story, a new creation. And as at the beginning of the “first” creation, there was the Word of God, the Word by which God created everything from nothing, so also now there is a new Word. It is a Word that God addresses to His Son, to the Messiah, right at the moment when the Son is about to enter the world.

The Evangelist takes it from the Old Testament: “As it is written in the prophet Isaiah: Behold, I send my messenger before you; he will prepare your way. A voice of one crying out in the wilderness, “Prepare the way of the Lord, make straight his paths” (Mk 1:2-3).

Mark refers to Isaiah this complete citation, but the Evangelist’s quotation is the sum of three different references from three books of the Old Testament. There is, first of all, Exodus (23:20), “See, I am sending an angel before you to guard you on the way and to bring you to the place I have prepared”; then there is the prophet Malachi (3:1), “See, I will send my messenger before me to prepare the way before me.” And finally, there is the prophet Isaiah (40:3), “A voice proclaims: In the wilderness prepare the way of the Lord, make straight in the wasteland the highway for our God.”

These three citations have the way, the path, the road in common. It is also the road on which God himself returns and walks with His people.  All this, Mark says, is a “gospel” (Mk 1:1), which means “good news,” a good proclamation, a word full of hope. Jesus himself is the one who announces the good news. Jesus is its content. The announcement and the announcer coincide. The good news in Jesus became history.

Mark, also, in the first verse, gives us two important clues that help us understand where this road will lead us. The Evangelist immediately provides us with a definition of Jesus and affirms that Jesus is the Christ, the Messiah, the One sent from God, the One who was promised as king of the lineage of David,  who would have fulfilled the writings of the prophets. And then he also says that this man is the Son of God. He is God himself.

In short, Mark immediately tells what the goal is, where those who set out on the journey will arrive starting from this new beginning, which is Jesus himself. He describes, step by step, where they will come who will read His Gospel.

One can divide the Gospel of Mark into two parts. There first culminates with Peter’s faith profession (Mk 8:29), which proclaims Jesus as the Christ, as the expected Messiah. The second goes beyond and arrives at another faith profession that of the centurion at the foot of the cross (Mk 15:39) who, watching Jesus die in that manner, exclaims, “truly this man was the Son of God!”

We are on a journey, and our way must arrive there, at the foot of the cross, to see that, in the beginning, there is the love of a crucified God; there is an absolute newness, which is that of a God who dies for man.

That is where the path of God arrives among men.

This discovery comes at the end of the journey, but it comes as grace, not merit.

One must make a journey of preparation, of conversion, to arrive at that profession of faith.

It will be necessary to peruse the entire Gospel little by little to allow ourselves to be stripped of our false images of God and ourselves and to arrive there as the pagan centurion, who was given, by grace, to recognize in Jesus death the revelation of God among men.

To start this new way and renew the awareness that something new is beginning, a man is sent ahead to prepare the way, so it is good to prepare.

Thus, as soon as John the Baptist begins to baptize, many people immediately rushed to him: “the whole region of Judea and all the inhabitants of Jerusalem” (Mk 1:5). The way is open again, the course of the wilderness on which the Lord returns: so many people get back on that way, they set out also on the path. He leaves Jerusalem, the Temple, the sacrifices because all this is no longer enough to quench the thirst for life and runs (Mk 1:5) into the wilderness, where a voice resounds that was silent for a long time.

Last Sunday’s theme was vigilance, which is a way of being in the world and of recognizing the presence of God in it. Today we are asked for conversion, metánoia (Mk 1:4). The necessary first step to begin this journey, to recognize the presence of God, consists of placing oneself in the truth. It is to recognize ourselves as sinners, in need of forgiveness; to recognize that we need to change our way, and prepare anew the path that brings us back to our source, to God, the course on which He can meet us. That is the conversion of which the Baptist speaks. It is entering the perspective of a way in which God comes to us, even before we can go to Him.