Meditation of Patriarch Pierbattista Pizzaballa: The Baptism of Jesus, Year B, 2021 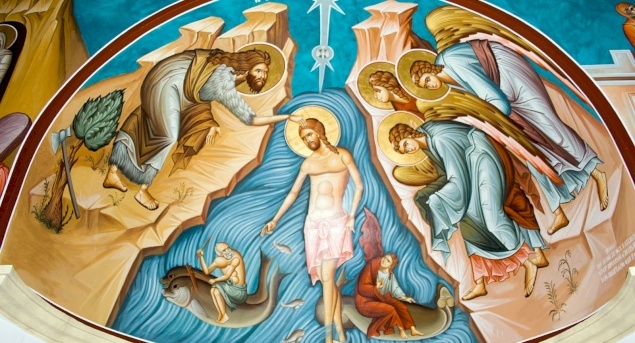 Meditation of Patriarch Pierbattista Pizzaballa: The Baptism of Jesus, Year B, 2021 Available in the following languages:

The Baptism of Jesus, Year B

In the Gospel according to Mark, the account of the Baptism of Jesus presents significant differences compared to the other synoptics. First of all, in Matthew and Luke, the accounts of the birth of Jesus precede the Baptism, and they present, to put it briefly, the figure of this personality who is about to enter the scene.

This doesn’t happen in Mark, and, directly here, Jesus comes on the scene, with the Baptism.

He shows up, and no one appears to notice Him; He is so much like all the others, one of the “all” (Mk 1:5), who come to the Baptist to receive baptism and no one takes note of Him.

Not even John, who is also waiting for Him and is speaking about Him.

Missing then is the dialogue that the synoptics point out, where the Baptist talks of his perplexities in accepting Jesus in his baptismal rite.

As in the other synoptics, an epiphany, a solemn manifestation of God, coincides with the Baptism: the Father sees the Son wholly immersed in human experience and expresses His total pleasure. But also here, unlike the Synoptics, Jesus Himself is the only one to notice this event: He alone sees the heavens open and hears the Father’s voice (Mk 1:10).

But there is another difference.

While in Matthew and Luke the heavens open, there is a rending. And a rending tells the full force of a tearing apart, of an opening that can no longer be put back together. This expression (Gk. schidzo) occurs only one other time in Mark, in an eminent passage: at the death of Jesus, the veil of the Temple “is rent” (Mk 15:38) in two, from top to bottom.

What can this connection mean? The veil in the Temple marks the access boundary to the holy area, where no one could enter, it was the Place of God’s presence. The heavens and the veil are, briefly, both boundaries that mark earth and heaven, God and man, sacred and profane: they define them, and in some way separate them. It is this barrier that here is rent, and this is the good news (Mk 1:1) that Jesus came to bring. From today, by this humble gesture, when God chooses to share the weakness of our being persons who are marked by sin, there is a rending, a tearing apart. One world ends, and the birthing of another starts. Something begins afresh, which we still know nothing about, except that it will unite heaven and earth, God and man.

A rending that will find its fulfillment on the Cross, when God will take our curse on Himself, and give us His life in exchange. There, every barrier will be shattered once and for all, heaven and earth will truly but one.

This rending, therefore, is the first element that links Baptism with the Cross; but it is not the only one. “Baptism” is the sole name that Jesus gives to the passion, and he speaks of it in answering the sons of Zebedee (Mk 10:38-39), who ask Him about sharing His glory. This baptism, which for now, Jesus only is to pass through, is the passage that awaits everyone. That is the door for those who want to enter into new life, into glory.

Moreover, both in the Baptism and on the Cross, there is the presence of the Holy Spirit. Here, in the Baptism, the Spirit descends on Jesus in the form of a dove (Mk 1:10); on the Cross it will be Jesus Himself who, “breathing,” gives the Spirit to everyone (Mk 10:37.38). The Spirit is precisely the new life that is born from the rending. The new life that passes through the rending, and through the rending can again spread and unite: a unique life, the life of God, now spreads between God and man, as between the vine and its branches (cf. Jn 15).

Finally, the last element. After the rending, there is a solemn proclamation of Jesus as “Son of God”. Here, it is the Father making it, on the Cross, it will be a centurion, a pagan, (Mk 15:39); as if God were recognizable just from this, by His capacity to rend the heavens and the veil, to give the Spirit. And both the heavens and the earth recognize Him by this sign, as if both heaven and earth tend to nothing other than to this profound unity. The Father recognizes Him as Son, and also the centurion, the pagan, the one far away. The One who rends the heavens cannot but be the Son of God.

All this, we’ve said, Jesus alone grasps. For all others, perhaps, this epiphany, as in the beginning, is too intense, too radiant, as was the manifestation of God on Sinai. And it takes the entire time and the entire journey of the Gospel to be able to enter this new creation where heaven and earth are once again near, communicating.

The Baptism of Jesus is the announcement of a renewed unity between heaven and earth, between God and man, between Creator and creature. And this unity is carried out by God himself, become a child, and manifested to the shepherds and the whole world. And today His redemptive mission is assigned and launched, which He will bring from Jordan to Jerusalem, where the love of God will show itself unobstructed.