Meditation of Patriarch Pierbattista Pizzaballa: The Holy Family, Year B, 2020 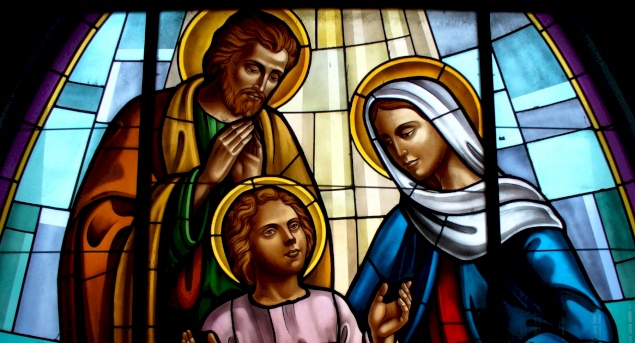 Meditation of Patriarch Pierbattista Pizzaballa: The Holy Family, Year B, 2020 Available in the following languages:

The Holy Family, Year B

The Gospel today describes a straightforward occurrence, quite ordinary in the life of every Israelite family. According to the Law of Moses, every child was brought to the temple and offered to the Lord. Concerning the redemption of the first-born male, the parents sacrificed two turtledoves, once they fulfilled the days of the mother’s purification.

But in the case of Jesus, this event opens somehow; it reveals on the horizon the very meaning of his life: this single occurrence becomes a critical moment of revelation.

There are two pious Israelites – a man and a woman – to complete this work of “opening.” The Gospel gives some indications that suggest they are two elderly persons. Over the years, they developed a great intimacy with the Lord. On three occasions (Lk 2:25, 26, 27), Luke says that Simeon was inspired and guided by the Holy Spirit. At the same time, he says that Anna “never left the temple, serving God night and day, fasting and praying” (Lk 2:37).

It is this familiarity with the Lord, this waiting on Him as the only reference of life that makes them capable of recognizing the Lord when He comes: and there where all see a baby like many others, Simeon and Anna can see beyond. As the Spirit descended on Mary to beget Jesus in her (Lk 1:35), so now the Spirit makes these two seniors able to welcome and recognize Him.

They welcome Him, recognize Him, and both speak of Him, saying amazing and new things about Him, some unimaginable details, that summarize Jesus’ life.

What are they saying?

The first unusual thing that Simeon says is, this child will be the salvation awaited by Israel, but not just for Israel. What Simeon sees with his own eyes is that, having anticipated Him for a long time, having made sense of an entire life, He is the salvation prepared for all people. He is a light to enlighten the Gentiles (Lk 2:31-32): he has awaited the redemption of Israel, now he sees the Salvation of humankind.

No: this God is indeed a God for all, none excluded, and therefore for all. He is a Word of consolation, of life, salvation, and peace. He is a God who becomes man and, as man, shares and enlightens the life of every man.

This universal “opening” that happens here, in a moment, as a glimpse in Simeon’s far-sighted gaze, will be in reality the long journey of Jesus, of the Gospel and the entire Church, up to the present.

Initially, Jesus Himself will not be aware of being sent except to the lost sheep of the house of Israel (cf. Mk 7:25ff). He will tell His apostles to do likewise (Mt 10:6). But then, gradually, His gift of salvation will go beyond every boundary, and after His resurrection, He will send His disciples to all nations (Mt 28:19-20). At the end of the Acts of the Apostles, the words of Paul to the Jews of Rome are like an echo of Simeon’s: “Therefore, I want you to know that God has sent His salvation to the nations” (Acts 28:28).

But Simeon says a second essential thing, namely that the mission of this Messiah will be a much-disputed and challenging mission, and this within His people.

He says it, using three very weighty words: He is here for the fall, and rise, and a sign of contradiction (Lk 2:34): his passing among men will not be a painless one. He will not leave anyone indifferent. Where this light comes from will lay bare hearts, it will reveal the logic that is worldly and distant from God, it will cause rifts and conversion, death and new life.

In this way, the expectation of Israel, fulfilled in Christ, and which Simeon and Anna were able to take in their arms, opens to a new path, a new hope: it will be a question of how and to what extent this prophecy of Simeon will take form in the life of Jesus.

This dynamic of contradiction guides the entire Gospel. From the beginning of His public life, when He spoke among His people the first words of salvation, all His fellow countrymen assembled “in the synagogue were full of anger. They got up, drove Him out of the city, and took him to the brow of the hill on which the city stood, to throw him off the cliff” (Lk 4:28-29).

Finally, Simeon does not only speak of Jesus; he not only reveals the course that awaits Him, but he also discloses something to his mother. He explains her as the mother of this peculiar Messiah.

Simeon discloses this mystery to Mary with a sincere expression: “your soul also” (Lk 2:35): Mary will not have privileges, she will not be free from the difficulty of believing, of not understanding, and she will not be exempt from suffering and pain. It will be this, also, to make her mother not only of her Son but also of every person, with whom she will share the beautiful and challenging journey of faith in Jesus, the Salvation and Light for the nations.