Meditation of Patriarch Pierbattista Pizzaballa: ThirdSunday of Advent, Year B, 2020 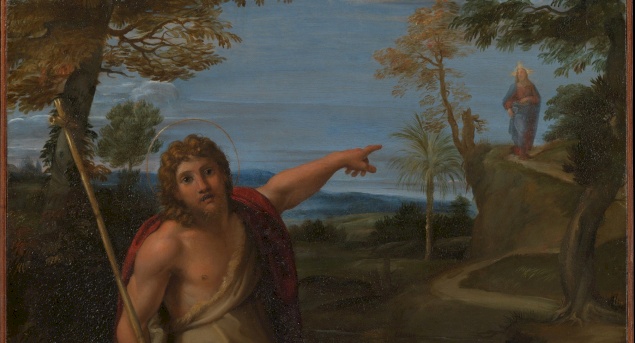 Meditation of Patriarch Pierbattista Pizzaballa: Third Sunday of Advent, Year B, 2020 Available in the following languages:

Third Sunday of Advent, year B

The Gospel we hear today is composed of two distinct parts: the first three verses are taken from the solemn Prologue of St. John (Jn 1:6-8), while the Gospel continues with the narrative part, which comes immediately after the Prologue. (Jn 1:19-18).

In the first part, it is the evangelist who presents the figure of John the Baptist; in the second, it is he the Baptist who introduces himself, urged by the questions of the emissaries sent from Jerusalem (Jn 1:19) to find out who this man was who was awakening the expectation of Israel, who had reopened the road to the desert.

The evangelist says four essential things about the Baptist: the name: “John”; the origin: “sent by God”; the mission: “to be a witness to the light”; and the purpose of the mission: “so that all might believe through him.”

The Baptist is the first witness of Jesus, in a Gospel in which the concept of witness is fundamental. It is enough to see how many times this term occurs (more than forty) to realize how vital the witness’ figure is.

We could think of John’s Gospel as a long journey in the course of which the identity of Jesus is made known step by step. During the development of this journey, witnesses (Cana, Samaritan woman, the blind man born, and many others) are heard.

There are two fundamental witnesses: the first is precisely the Baptist, while the second is the beloved disciple.

And they both do the same thing: they testify to Jesus’ relationship with the Father, His coming from God to return to Him.

And they do it for one reason only: as for the Baptist, also for the beloved disciple, it is written that his testimony has a single purpose, the disciples’ faith. In chapter 19, after the death of Jesus, when the soldiers hit him in the side and water and blood come out, the evangelist can say: “He who has seen bears witness and his testimony is true; he knows that he is speaking the truth, so that you too may believe” (Jn 19:35). The purpose of a witness is faith so that anyone who believes may have life and salvation.

Even in legal practice, a witness is a person who has seen it firsthand. Not merely one who has heard, but one who was present, who knows things from having experienced them.

A little further on concerning the verses read today, the Baptist will say that he saw with his own eyes “I contemplated the Spirit descending like a dove from heaven and abiding on him ... And I saw and testified that this is the Son of God” (Jn 1:32-34).

The witness, therefore, is not only the one who saw but also the one who believed first: he listened to the Word of the Father who sent him and recognized that that event took place in the person of Jesus. And he believed in him.

The passage then continues with a sort of investigation into the Baptist’s identity, who he is, and whether he is the Messiah.

There is someone to know, it is true, but it is not the Baptist: he only serves to indicate who it is who needs to be known: “among you is one whom you do not know” (Jn 1:26). John is clear that only by not drawing attention to himself can he turn it to the One who is truly expected. And only by disappearing will he fulfill his mission and witness to the presence of the Messiah among men. Later, he will explicitly say: “He must increase; I, on the other hand, must decrease” (Jn 3:30).

The second concerns Isaiah’s quotation, taken from the beginning of chapter 40 of Isaiah, the start of the great Book of Consolation, which announces the end of slavery and the beginning of a new time.

Behold, says John the Baptist, I am only the witness that this time has begun, and that the only thing to do is to know the One who is already among you, for whom there is no more time to waste, the waiting is over there.

Today’s Gospel, presenting the Baptist, describes the mission of the Church. It is in the Church that, today, the voice that cries out in the desert resounds. It is in it that the word of consolation is made present. The Church’s first mission is to indicate to today’s man the way of salvation, the way to encounter Christ, and nothing more. Everything else is secondary and comes later.

Today we are strongly asked to return to the essential, to that “principle” that Mark spoke of last Sunday (Mk1:1) that of focusing attention on the presence of the Lord who works in the Church and the world and to let go of all that is not directed to Him.

It is a strong appeal that seems to know our inclination to stop at the details and lose the essential.

Advent, then, is the time in which the Church invites us to rediscover the essentials of life and faith.