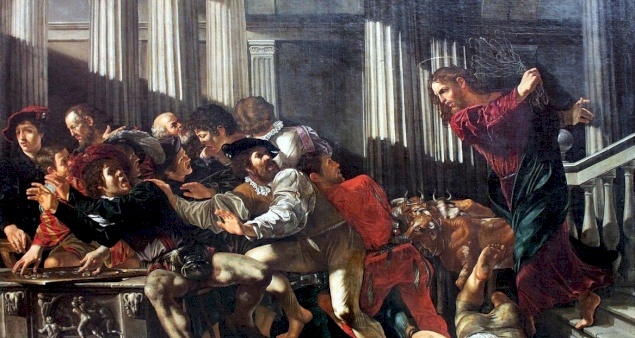 Meditation of Patriarch Pierbattista Pizzaballa: Third Sunday of Lent, Year B, 2021 Available in the following languages:

Third Sunday of Lent, Year B

We had started Lent with the Gospel of Saint Mark. Today, until Palm Sunday, we begin to read passages from the Gospel of John. In today’s reading, Jn 2, 13- 25, the Evangelist narrates how Jesus entered the Temple and drove out of it the merchants and money changers. In order to understand better this passage, we depart from far away as follows.

Every Evangelist starts his Gospel with an overturn, an overthrowing, an event or some words expressing newness and somehow a revolution in history.

All Evangelists put, as background of their narrative, some elements in common, which are basic and which one may summarize with the statement: the Scriptures have been fulfilled. A new time of salvation for all the needy has started. In order to enter in this Kingdom, one has just to repent, leave the old way of living the relationship with God, and to open oneself to a new pattern of relationship with Him.

Saint Matthew, for instance, after the childhood narratives where the awaited Messiah is worshipped by the pagans, has the public life of Jesus start with the great speech on the Mount: it is a synthesis of the newness of life that those called to the Kingdom may live up to, from that moment onwards.

Saint Mark writes that Jesus came to humankind, stressing that God became close to us.

Saint Luke too narrates the events of Jesus’ birth. Through the Magnificat, the Evangelist puts on the lips of the Virgin Mary the expression of the overturn of history, seen by the Virgin, in her own flesh: “He has thrown down the rulers from their thrones, but lifted the lowly” (Luke 1, 52). After Jesus’ Baptism and temptations, He starts his ministry at Nazareth where, on one Sabbath, he enters the synagogue and pronounces his speech which constitutes a whole program. His words are met immediately with great animosity and hostility. In this speech, Jesus says that a year of kindness and mercy has started, for the poorest persons in history.

In the Gospel of Saint John, this overturn is physical, concrete, plastic: it is the event of the “purification” of the Temple by Jesus. The other Evangelists put this episode at the end of their gospels, after the triumphant entry of Jesus into Jerusalem. Saint John places it at the beginning.

After the encounter with the Baptist and the calling of the first disciples, Jesus starts his ministry in two strategic places: at Cana, at a house where a wedding is celebrated, and in the Jerusalem Temple.

At Cana, Jesus gives abundantly the new wine, for the New Covenant whose hour has arrived. In the Temple, Jesus makes a symbolic important gesture: he affirms that that way of celebrating cult, with sales and money, is not a cult which pleases God, but rather a market, an idolatry. Such is also any relationship with God where man imagines that he may acquire salvation, through money or any other offering.

Jesus says that the time of “marketing” with God is over, as well as that type of cult, and that a new way of living faith begins. The overturn is complete, like that of the counters of the money changers (Jn 2, 15).

Overturned also is the relationship between sacred and profane, as well as the distorted image of God and the sense of the cult, of the sacrifice and of the Temple which is reported back, by Jesus, to its original primary dimension, that of gratuity.

In Jesus’ gesture, one recalls the last verse of prophet Zechariah’s book, where it is foretold about the messianic time in which “there shall no longer be any merchant in the House of the Lord of hosts” (Zc 14, 21). No wonder that the chiefs of the people had asked Jesus for a sign (Jn 2, 18) in order to give legitimacy to his scandalous behavior.

What makes legitimate Jesus’ claim that he is inaugurating the new times? Jesus replies talking about his Passion which will render today’s gesture final. Then, his glorious body, risen in three days (Jn 2, 19), will really be the New Temple, the new place of encounter between God and man, between God and every human being.

No wonder that the chiefs of the people and the Pharisees did not understand. Neither did the disciples. Thus starts a dynamic of misunderstandings which will continue throughout the fourth gospel.

Their lack of understanding does not mean that Jesus’ speech is useless or pointless. Saint John anticipates already that, after Jesus’ resurrection, the disciples would remember those words and gestures of His and that they would believe.

Jesus’ resurrection will be the key event which will enable the disciples to understand. The Holy Spirit will remind them, in a new heavenly way, the things that Jesus said and did (Jn 14, 26).

The way of Lent is becoming more and more committing for us, not in the sense that we are asked to do anything additional, but rather that we let the Lord operate in us this overturn which he did with the counters of the merchants in the Jerusalem Temple. 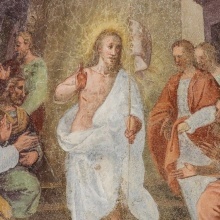 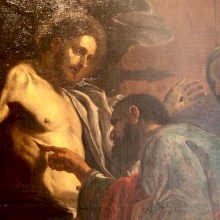