Holy Land Coordination to have pastoral focus on Christians in Gaza, Ramallah and East Jerusalem

Holy Land Coordination to have pastoral focus on Christians in Gaza, Ramallah and East Jerusalem Available in the following languages:

HOLY LAND – From January 11- 16, 2020, European and North American Bishops will pay their annual visit to the Holy Land, during which they will meet with Christians in Ramallah, East Jerusalem and the small Christian community of Gaza, who were nearly deprived of their right to celebrate Christmas in Bethlehem this past December. Another part of their visit will be dedicated to the promotion of peace and dialogue, two topics that recurred yearly during their meetings.

The annual visit of the Holy Land Coordination has been taking place since 1998 to “act in solidarity with the Christian communities in the Holy Land and to share in the pastoral life of the local Church as it experiences extreme political and social-economic pressure.”

Since that time, bishops from around the world have been meeting with Christians in the Holy Land and listening to their struggles and aspirations. Their visits have contributed immensely to conveying to their home countries and Church communities the voices of marginalized Christians, especially the youth. It was also an encouragement to Christians everywhere to follow in their footsteps to “come and see”, as one HLC statement puts it, and to visit the Christian communities and the holy sites in this land.

During their visits throughout these years, the bishops were able to hear firsthand about topics like family reunifications, land confiscations, evictions and home demolitions that faced and still face blackouts in major mass media. Their statements do not shy away from using words like occupation, checkpoint, separation wall and oppression. Sometimes, they sound though like a broken record urging Israeli and Palestinians to stop the violence, to put end to the conflict and seek a just peace.

The bishops not only come to support the local Christian community, but their visits extend to meetings with Muslims and Jews. They always deplore the lack of human contact between the two peoples which in turn undermines trust and dialogue. Although they call for dignified life for both sides, peace for both peoples, security for Israel and a viable future state for the Palestinians, one should recognize and emphasize that the situation in the Holy Land is complex and both sides live different realities and have different priorities.

Just like many Western countries, they are concerned too about the security of Israel. However, what these bishops urge, and which these countries fail to do, is that Palestinians have as much right to security as Israelis do. In one statement, they mention that “to be pro-Israeli has to mean being pro-Palestinian. This means being pro-justice for all, whose certain fruit is lasting peace”.

This year, the bishops will meet with the youth of Ramallah and East Jerusalem. A meeting with Archbishop Pierbattista Pizzaballa along with Archbishop Leopoldo Girelli will take place at the Latin Patriarchate of Jerusalem, where a Holy Mass will be celebrated.

A pastoral visit to the Christian community of Gaza is also on the program. The bishops expressed their solidarity after the news that Israeli Authorities nearly refused to issue any permits for Gazan Christians for Christmas festivities in Bethlehem this past December.

The Holy Land Coordination will also meet with Palestinian and Israeli officials as well as the Comboni sisters in Bethany.

Holy Land Coordination: known fully as Coordination of Episcopal Conferences in Support of the Church of the Holy Land 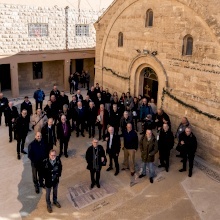 Holy Land Coordination Communique 2023: Communion with the Church in Jord... 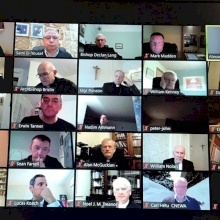 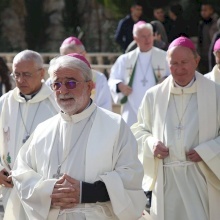