The Bishops of CELRA on their "ad Limina Apostolorum" visit 2018

The Bishops of CELRA on their "ad Limina Apostolorum" visit 2018 Available in the following languages:

ROME – Please find below the statement issued by the Conference of Latin Bishops of the Arab Regions, which met in Rome from March 5-10, 2018.

Statement by the bishops of the Conference

of Latin Bishops of the Arab Regions

We, bishops of the Conference of Latin Bishops of the Arab Regions (CELRA), from Egypt, Syria, Iraq, Lebanon, Jordan, Palestine, Israel, Cyprus, Djibouti, Somalia and the Arabian Peninsula, held our plenary meeting in Rome from March 5-10, 2018, which also coincided with the “ad limina visit”.

The important moments of the visit were first of all the audience with Pope Francis, and the pilgrimage to the basilicas of Saint Peter, Saint Mary Major and Saint Paul outside the Walls, where we prayed for the strengthening of the faith of our faithful who live in difficult situations, especially in Syria, Iraq, Palestine, Somalia and Yemen. Great encouragement came from the strong attention with which Pope Francis follows the events of the Middle East, from his prayers and from the tireless work he does for peace and justice and for ecumenical and interreligious dialogue. The same nearness was felt during the visit to the Secretariat of State. During the meeting with card. Parolin, we were informed about the status of the agreements between the Holy See and Israel, which have been negotiated over the period of 24 years, but have not yet been signed. The delay in the signature was partly due to the latest crisis between the Municipality and the Churches of Jerusalem, for taxation.

We also met the Prefects and Secretaries of the Congregations for the Oriental Churches, for the Evangelization of Peoples, for the Laity, the Family and Health, for Integral Human Development, Divine Worship, Doctrine of the Faith, Clergy, Catholic Education and the Apostolic Signatura. We also visited the Pontifical Councils for Interreligious Dialogue, Promotion of Christian Unity, and that of Legislative Texts. Finally we met the Secretary for Relations with States. All these meetings, during which we expressed our challenges and posed questions, were the occasion for a true dialogue “in truth and charity” among the Universal Church and our particular Churches.

We dedicated a meeting to the XXV Ordinary General Assembly of the Synod of Bishops on the theme “Youth, faith and vocation discernment” to be held in Rome next October. After discussing the preparatory document, we elected the delegate bishop and chose the two young people who will represent our dioceses at the pre-Synodal meeting, which will be held in Rome from March 19 -24. In fact, before the opening of the Synodal works of October, the Church wants to hear, just from the voice of the young, their challenges and their opportunities, in order to offer them concrete proposals in discerning their vocation.

Among the good news, we learned that among the many martyrs who died for the faith in our dioceses, Sister Leonella Sgorbati, a Consolata missionary, martyred in Mogadishu in 2006, will be beatified on May 26, 2018 in Piacenza. Thinking of the life of this sister and of the thousands of martyrs for the faith, we remember that their blood is a source of encouragement and hope in our commitment to the poor. We greet with respect and affection the religious congregations, priests and faithful who work in dramatic situations, thinking in particular of the Missionaries of Charity, who continue their service in Yemen.

To all our faithful, to the clergy and to the members of the religious Congregations working in our dioceses, we wish a holy Lenten journey that prepares us for the celebration of the Lord’s Passover, as well as a good pastoral preparation for the future Synod of Bishops and World Youth Day in Panama.

The next CELRA assembly will be held in Cairo in February 2019. 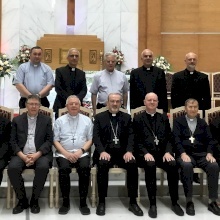 The Conference of Latin Bishops in Arab Regions holds its meeting in Abu... 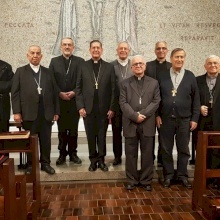 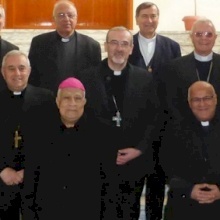 The Conference of Latin Bishops of the Arab Regions (C.E.L.R.A.) holds it...