Baptism Site: Faithful converge from East and West to meet in the river

Baptism Site: Faithful converge from East and West to meet in the river Available in the following languages:

BAPTISM SITE – On January 10 and 12, 2020, the faithful and pilgrims in the Holy Land made their annual pilgrimage to the Baptism Site (Al-Maghtas) on the west and east banks of the Jordan River, to commemorate the Baptism of the Lord.

Last Friday, January 10, the Catholic Church, whose building complex is found within a stone’s throw from the east bank of the Jordan River, marked its 20th anniversary of the start of the pilgrimage to the Baptism site in the modern era. Speaking at a press conference before the ceremony, Archbishop Pierbattista Pizzaballa, Apostolic Administrator of the Latin Patriarchate of Jerusalem, referenced the “huge change” that the Baptism Site has witnessed over 20 years, calling it one of the most important Christian pilgrimage sites in Jordan.

Before the opening of pilgrimage site in 2000, the location was closed off to visitors and pilgrims as the area was filled of landmines that had been planted there since the Six Day War in 1967. After the signing of the peace agreement between Jordan and Israel in 1994, Jordan’s Royal Engineer Corps conducted demining of all landmines and minefields, paving the way to turn the site from a war zone into what it stood once, a Christian pilgrimage site to commemorate the Lord’s baptism.

Twenty years ago, on January 7, the first ceremony took place at Elijah’s Hill, where 2000 prayer candles were lit on this occasion. Since then, three Popes had visited and prayed there, with Popes Benedict XVI and Francis only visiting the Jordanian’s site during their pilgrimages to the Holy Land, which was viewed by Jordanians and local Church leaders as the Vatican’s recognition and confirmation of the authenticity of the site.

In July 2015, the UNESCO inscribed the Baptism Site “Bethany beyond the Jordan” on its World Heritage Site. “Believing it to be” the location where Jesus was baptized by John the Baptist, the UNESCO’s decision of inscription derives from a consensus by Church leaders, who cited archeological evidence and tradition as reasons for the authenticity of this location.

The Baptism Site “Bethany beyond the Jordan” is home to Tell Al-Kharrar or Elijah’s Hill, the place where St. Elijah ascended in a fiery chariot into heaven, as well as the Laura (or Lavra) of St. Mary the Egyptian and hermits’ cells. According to the official website of the Baptism Site, 12 churches will eventually be present in the area, as construction on the Syriac, Lutheran and Maronite Churches has not started yet.

Jordan’s Baptism Site is one of 5 locations in Jordan that were recognized by the Vatican as pilgrimage sites. The other four are Mount Nebo, Mukawir, Our Lady of the Mount in Anjara and Mar Elijah in Ajloun.

On Sunday, January 12, the yearly Franciscan pilgrimage to commemorate the baptism of Jesus took place at the west bank of the Jordan River, which is known as Qaser El-Yahud (Castle of the Jews). After being welcomed by Fr. Mario Hadchiti and the civil authorities at the Convent of the Good Shepherd in Jericho, Fr. Francesco Patton, Custos of the Holy Land, along with the Franciscan friars took the bus to Qaser el-Yahud Baptism Site. Once arrived there, Franciscans, local Christians and pilgrims took part of a procession to the river before celebrating the Holy Mass. The pilgrimage continued to the Greek Orthodox monastery on the Mount of Temptation.

The Franciscan pilgrimage to this site can be traced back to 1641. As a result of the of Six Day War, the location, which includes 8 Churches and monasteries, was closed off in 1968 and the last recorded Mass in the Franciscan monastery took place on January 7, 1968, reports the Custody of the Holy Land.

In 2000, the Israeli controlled site was briefly opened on the occasion of the pilgrimage of Pope John Paul II to the Holy Land. The heavily mined area did not receive any visitors until 2011, when the Israeli authorities cleaned a small area near the site to make it accessible to pilgrims. It was not until March 2018, when the Israel National Mine Action Authority and the humanitarian mine clearance organization Halo Trust started working to clear the landmines in the area after securing the approval of the Israelis, Palestinians and all the Churches.

The work to remove these unexploded debris and booby traps is still underway. Once the clearance is done, the Churches “will be refurbished to serve the hundreds of thousands of pilgrims who visit the Baptism Site each year,” reports the Halo Trust organization.

Speaking about the clearance of the landmines, Fr. Francesco Patton said that “landmines mean a field of war and if the mines are cleared, it becomes a field of peace.” 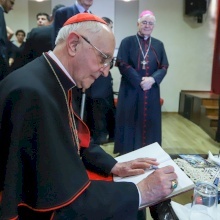 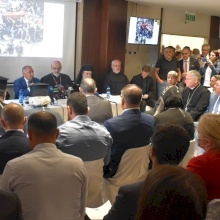