ROME – By decision of the Holy Father, His Eminence Cardinal Fernando Filoni has been appointed Grand Master of the Order of the Holy Sepulchre starting this December 8, 2019, Solemnity of the Immaculate Conception. Cardinal Filoni was the Prefect of the Congregation for the Evangelization of Peoples before being succeeded by Cardinal Luis Tagle, Archbishop of Manila.

Cardinal Filoni, born in Nardò, Italy, was appointed Apostolic Nuncio to Iraq, Jordan and the Philippines before serving as the Prefect of the Congregation for the Evangelization of Peoples in 2011.

His Eminence Cardinal Edwin O’Brien, Grand Master of the Order since 2012, who concludes his mandate a few months after reaching the age of 80, released a statement following the decision and announcement of this new appointment:

“It is with complete acceptance and appreciation that I welcome the decision of Pope Francis to replace me as Grand Master of the Equestrian Order of the Holy Sepulchre of Jerusalem. I am especially pleased that His Holiness has appointed His Eminence Fernando Cardinal Filoni as my successor. I have been privileged well beyond the time of my letter of resignation, submitted over five years ago. Throughout my more than eight years as Grand Master, my personal faith and love of our Church have deepened as I have witnessed our members’ commitment to the goals of our Order, expressed in different cultures and languages, all profoundly Catholic! I am most grateful to the two Governors General with whom I have served, Their Excellencies, Professor Agostino Borromeo and Ambassador Leonardo Visconti di Modrone. Our collaborators in the Grand Magisterium and the daily, dedicated service of our office staff largely account for the steady growth of our Order. Their commitment to our lieutenancies and to the mission of the Latin Patriarchate has been unwavering. Finally, I welcome His Eminence, Cardinal Filoni as Our Grand Master. His long and broad pastoral and administrative experience in service to the Universal Church will be precious assets as he leads our Order into the future. I offer him my full and fraternal support as I beg the continued intercession of Our Lady of Palestine.” 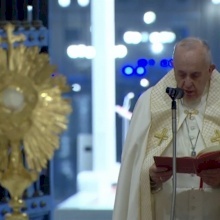 Homily of Pope Francis during Extraordinary moment of prayer for end of C... 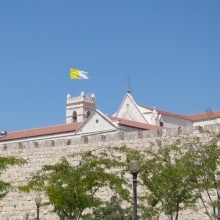 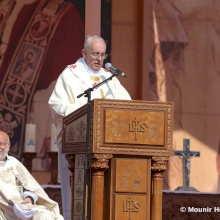