A pilgrim visits to our Christian roots 2008 A pilgrim visits to our Christian roots

With the aim of strengthening the ecclesiastical and societal affiliation of our students of all ages, it was decided to organize visits to the holy places in which the events of our salvation took place. Thus, turning attention to these events and places that have deep roots in history, we can read, in its light, the present state of our Christian faith and its future in this land. A land that, by God’s Will, was chosen as our homeland and where a salvific message was given to reach the ends of the earth.

The Catechetical Office of the Latin Patriarchate in Jerusalem, in cooperation with the Franciscan Brothers, organized visits to the Holy places in the city of Bethlehem for students of Jerusalem Christian schools, according to the following program: Sunday, October 26, 2008, fifth grade; Sunday, November 16, 2008, sixth grade; Sunday, November  23, 2008, seventh grade.

The numbers of students participating in all these visits ranged between (400-500) students, in addition to the accompanying teachers, as for the sister Virginie Habib, Mr. Samir Hodaly, and the Franciscan brothers Badie Elias, Aquilino Castillo, Marcelo Cichinelli and Antonino Milazzo were among the permanent accompaniments to these visits.

The Franciscan Brothers prepared a simplified map illustrating the journey of the Holy Family from Nazareth to Bethlehem with accompanying Biblical texts explaining these events.

Shepherds’ Field was the first place visited, viewing the various monuments from natural sediments carved in the rock to newly built shrines. Also referring to drawings of the events that took place on its land. The students listened to explanations on all these matters from the written texts. Then we sang together the hymn “Glory be to God” echoing the Angels hymn that joyful night, And following the example of the shepherds who went to Bethlehem, guided by the star to see the Savior, we also set out following their steps and reached the Church of the Nativity where the students heard a brief historical explanation about the church and what the mosaic paintings in the entrance courtyard indicate. They, then, continued to the place where Christ was born, where they touched the silver star that marks the place where Jesus was born and knelt in homage before the manger where Jesus was born.

The Gospel text narrating this event of two thousand years ago was read, and came alive for us, being in the very place described in the reading.

Then we joined the parish to celebrate the Divine Liturgy, and afterwards went on foot to the “Catholic Action” center. The students were able to wander a little on the streets of Bethlehem, enjoy lunch and a little play, fun, and song. The next step brought us to our closing station, also on foot, the “Milk Grotto” where they wandered around the shrine, viewing drawings and statues that decorate the place, and listened to the Biblical text of the story of Jesus’ escape with his family to Egypt and the reasons for it. We prayed in this sacred place for the intentions of those who left their homeland and live in exile for various reasons, that they can return to it. Some of our group lit candles for the intentions of relatives who are unable to conceive, asking the intercession of our Mother Mary for the fulfillment of this intention. The visit concluded with a hymn to the Virgin Mary, and we headed to the buses that took us to Jerusalem.

Without doubt, the Bethlehem visit will lend to a deeper understanding during Christian Education class on Christmas and have a special flavor and greater impact this year as we celebrate Christmas festivities. 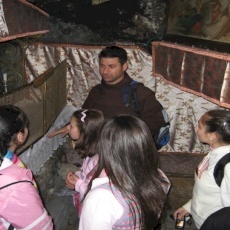 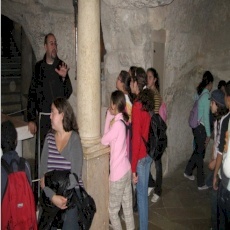 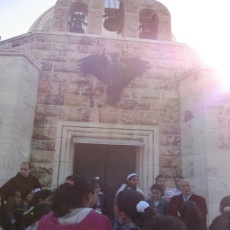 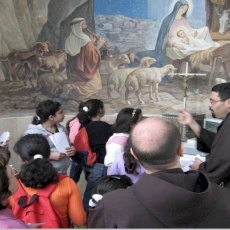