Christmas reflections of Mr. Sami El-Yousef from the Holy Land 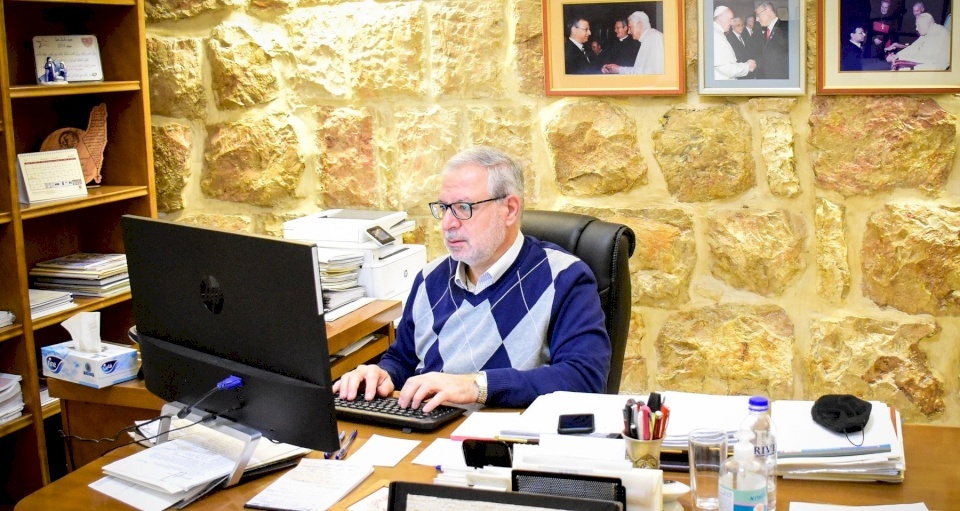 End of Year Reflections from the Holy Land

JERUSALEM - This year will certainly go down in history as a truly historic year, one that disrupted life as we knew it around the globe due to the COVID-19 pandemic and forced on all of us a new normal, the parameters of which are still in the making. It was the year of shutdowns that brought economies around the world to their knees, closed schools to billions of students, closed borders and airports and kept people closer to their homes. We all became professionals at virtual meetings and and better at using the available technology to work, teach and learn, do business, and pray. Humanity had to adapt, and we in the Holy Land - having been through many crises in our history - adapted possibly better than the rest.

In the humanitarian area, the suffering multiplied exponentially, and we had to adjust our efforts to reach the largest possible number of people who were suffering as a result of the pandemic. The main programs of support continued uninterrupted and increased including our medicines program, medical emergencies, educational support, social assistance, refugee and migrants support, job creation in Gaza, and support to marginalized communities in East Jerusalem. In addition, and due to the unprecedented generosity towards the two appeals launched in May, we were able to support thousands of families with basic humanitarian needs and tuition support. It was heartwarming to see aid come from all corners of the world in support of their brothers and sisters in the Holy Land, despite their own challenges at home. We continued to be a priority to many!

As for the educational pillar of the Latin Patriarchate of Jerusalem, the teaching and learning process to more than 20,000 students attending 44 schools in Jordan, Palestine and Israel continued through the dedication of over 1,795 staff who worked very hard to adapt to online teaching almost overnight without much preparation, then go back to modified in-class education then adjust again to some blended educational combination. Despite the many infrastructure shortcomings, lack of proper equipment and training, they made a heroic effort to continuously adapt to be of service to their students. Having to deal with three governments and conflicting regulations did not help, yet with the grace of God, it all came together in the end.

The pastoral activities continued at various levels depending on governmental regulations which seemed stricter in Israel than in neighboring Palestine and Jordan where semi-normalcy continued. Activities involving large numbers of people were all curtailed including summer camp activities, big celebrations surrounding major feasts, weddings, and funerals. However, contact was maintained between the priests and the faithful, and many online activities were arranged including the streaming of Holy Masses. Thus, flexibility was needed as the year unfolded and we all had to adapt. What was certainly sad was to see the streets of the Old City of Jerusalem empty during the Holy Week and the Easter celebrations. Now as we prepare for Christmas, virtual tree lightings are in fashion and it appears that the traditional procession to Bethlehem, Midnight Mass and all other services will probably be limited in nature. This will be an opportunity for people to concentrate on the symbolism of the birth of our Savior rather than on the commercial aspect or the community celebrations.

As we got closer to the end of the year, we were happy to learn of the decision of His Holiness Pope Francis to appoint Archbishop Pierbattista Pizzaballa as the 10th Latin Patriarch of Jerusalem since the re-establishment of the Latin Patriarchate in 1847. A historic decision and one that acknowledges the successes he has had over the past four years as Apostolic Administrator in leading the administrative and financial restructuring of the Latin Patriarchate and getting it out of the huge deficit it was facing. Thus, his appointment ensures that all the hard work of the past four years will continue uninterrupted without any delay to ensure that the Latin Patriarchate of the future stands on solid ground from a financial and administrative perspective to tackle the many challenges that remain. His priorities will now shift more towards the pastoral activities and faith formation. A new era is about to begin for the Church of the Holy Land, and we are all privileged and honored to be part of it. In his homily during the first Pontifical Mass at the Holy Sepulcher a few days ago, His Beatitude set the stage to all of us by saying: “We want to journey together. No one, no group, no institution has all that it takes to serve the Church. But at the same time, each one is necessary. Only together can we sustain each other. Each one has its own work, its own function, its own service, its own identity … but all work together for the service of the Kingdom”. Beautiful words by our new humble and wise patriarch.

In closing, allow me to extend our gratitude and appreciation to our generous donors from around the world, and in a very specific way all those who supported us extraordinarily through the two appeals for their generous moral and financial support without which our work would have been impossible. May I take the opportunity to extend to you and your families and friends a Merry Christmas with our best wishes for the New Year. May 2021 see a quick end to the pandemic and the global suffering it has inflicted. Keep us in your prayers.