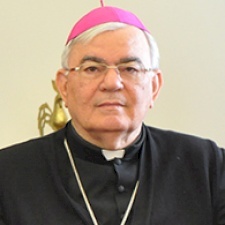 And, from 2017, Latin Patriarchal Vicar in Jerusalem and Palestine

Bishop Giacinto-Boulos Marcuzzo was born in San Polo di Piave (Treviso, Diocese of Vittorio Veneto) Italy, on April 24, 1945. He was a student in the "Istituto Missionario San Pio X " of Oderzo (TV).

He completed his studies in philosophy and theology at the Latin Patriarchal Seminary of Jerusalem in Beit Jala, and on the 22 June 1969, he was ordained a priest. Beyond the classical courses and languages, he learned, besides italian, some other modern languages in what he currently speaks: french, arabic, english, hebrew and german. For one year he was assistant parish priest in Beit Jala and teacher in the seminary. In 1970, he was appointed assistant parish priest in Ramallah, where he also became the vice-director of the "Al-Ahliya College” and was put in charge of the priestly vocations at the diocesan level.

From October 1972 he started, with Fr. Farouk al-Bassir the missionary experience of the Latin Patriarchate of Jerusalem in South Sudan. Until end 1977 he served as the parish priest of Malakal Church in South Sudan and as vice-rector and later rector of the minor diocesan Seminary in Malakal (Upper Nile). There he built a new church, Christ the King Cathedral in Malakya quarter, and founded new Communities (Missions or parishes branches) and got a strong social involvement and experience among the Nilotic tribes (Shilluk, Denka Nuer).

From 1978 to 1980 the Patriarch Beltritti sent him to Rome where he did specialized studies in dogmatic theology (Ecclesiology) at the Pontifical Lateran University and in spiritual theology at the Theresianum University. In 1980 he obtained the second University degree (Licenza) with research about "The ecclesiology of the bull ' Nulla celebrior ' of Pius IXth, 1847". In the same year, he became professor of dogmatic theology and vice-rector at the Latin Patriarchal Seminary in Beit Jala. In December 1981 he became the rector of the same seminary.

In May 1986, he obtained a Doctoral Degree from the Pontifical Lateran University. The subject of his dissertation was on the oldest original arabic christian manuscripts and the early palestinian arabic literature, and it was based on the analysis, translation, and presentation of "Le dialogue d'Abraham de Tibériade avec Abd-al-Rahmān al-Hashimi à Jérusalem vers 820". Because of his research and studies, he is considered today a competent expert among the rare scholars in Christian Arabic Literature and orientalist culture.

In 1986 he was, with Fr. Rafiq Khoury, co-founder of "St. Cyril's Theological Program" in the Bethlehem University and professor of Theology and Christian Arab Literature there. He was also co-founder of the pastoral center "Emmaus" and active in some other cultural Centers like "Al-Liqa".

On the 3rd July of 1993 he was ordained as Titular Bishop of Emmaus-Nicopolis and auxiliary Bishop of the Latin Patriach of Jerusalem. His episcopal moto is "Solvens Parietem " ("To destroy the dividing wall", Eph 2,14). In September 1994 Bishop Marcuzzo was appointed Latin Patriarchal Vicar for Israel in Nazareth.

He is a member of the CELRA (Conference of the Latin Bishops of the Middle East) and, as a member of the AOCTS (Assembly of Catholic Bishops in the Holy Land), he was appointed, episcopal delegate to follow four special sectors:

2) Coordination of the inter-church pastoral work with the young people (especially the World Youth Days); He organized the local delegations of young people for the Catholic Churches in the Holy Land in the WYDs of seven international meetings (1991, 1997, 2000, 2002, 2005, 2008, 2011, 2013) where he was appointed very active in the animation of the “catechesis” especially in Arabic language.

3) Pastoral care for Family (especially the international Congresses); he organized the delegation of families of the Latin Patriarchate in five international meetings with the Pope (1994, 1997, 2003, 2006 and 2018).

4) Pastoral work with Consecrated Persons where he regularly follows the monthly activities of the USRTS, especially of the Galilee branch.

He was an active member of the "Diocesan Pastoral Synod Secretariat "(1993-2000), the "Jerusalem Commission for the Great Jubilee 2000" and of the "Theological Thinking Diocesan Committee".

In 1994 he was appointed co-chairman of the "Juridical sub-Commission" between the Holy See and the State of Israel, and in 1999 became a member of the "Bilateral Commission" of negotiations for the application of the Fundamental Agreement. In 1997-99 he was actively involved in the Experts Committee in preparation for the "First Congress of the Catholic Patriarchs and Bishops of the Middle East" (May 1999). In 1999 and 2000 he was appointed one of the official organizers of the pilgrimage of Pope Paul-John 2nd in the Holy Land (March 2000) and, in 2009, of the pilgrimage of Pope Benedict XVI (May 2009).

From year 2000 up to now, he was appointed a member of the International Regents Board of the Bethlehem University as representative of the president of the AOCTS.

In the Jubilee year 2000, with a French group of “Association Marie de Nazareth”, he started to promote and to create in an ancient school, near the Basilica of Annunciation, the “International Center Mary of Nazareth” (biblical multishows, chapel of unity, old archeological biblical ruins, small biblical garden…) which was officially inaugurated in 2010 under the management of the “Community Chemin Neuf”.

In May 2002 until now, he was appointed by the Pope Consultor in the "Pontifical Commission for the religious relations with the Jews". He is an active member of different other Interfaith Groups like the "Patriarchal Commission for the Christian-Jewish dialogue" and the "JCJCR".

In 2003 he became professor of dogmatic theology in the new Theological Program for lay people in the "Mar Elias University Campus" in Ebellin (Galilee).

In June 2008, the new Latin Patriarch of Jerusalem, H.B. Fouad Twal, renewed the function of Vicar General for Israel to Msgr Marcuzzo.

In September 2011, with the Latin Families Club of Nazareth he promoted and constantly encouraged the “Ecumenical Biblical Contest” for boys, young people and adults in Israel and Palestine who later had, through the internet, a good impact in all the Christian Arab world.

Along with his pastoral and administrative work as bishop in the parishes, schools and associations, and besides his care for meeting many pilgrimages groups, he took and takes part in many theological, interreligious, and intercultural (especially orientalist) meetings at local and international level.

He is sometimes sent to represent the patriarchate and take part in the solemn ceremonies of investiture of the Knights of the EOHSJ, especially in Germany, Belgium, France and also in the USA.

In July-August 2017 he preached a spiritual retreat to the general assembly of the Australian Knights in Sidney and presided over the ceremonies of investitures, as delegated by the Grand Master, in the lieutenancies of Sydney, Brisbane, Adelaide, Tasmania, Melbourne and Perth.

In August 2017, Msgr Giacinto-Boulos Marcuzzo was nominated, by the Apostolic Administrator H.E. Pierbattista Pizzaballa, patriarchal Vicar General for Jerusalem and Palestine, and kept almost all the previous pastoral and cultural commitments

In April 2020, at the 75th anniversary, he presented his canonical resignation as Auxiliary Bishop to the Pope Francis who accepted it on the 29 of August 2020. But, at the same time, Msgr. Pizzaballa renewed to him the responsibility of Patriarchal Vicar General, ensuring a continuity in this special time of transition. In November 2020 he received and welcomed officially the new Latin Patriarch of Jerusalem, H.B. Pierbattista Pizzaballa, who renewed to him all his previous functions.

On the 1st of October 2021, at the application of the new organization of the pastoral and administrative appointments in all the different aspects of the patriarchate (Vicariates for Jordan, Palestine, Israel, Cyprus, St James, Migrants), Msgr. G.B. Marcuzzo entered into the canonical retirement, and remained in the residence of the latin patriarchate at the disposal of the Mother Church of Jerusalem for any useful pastoral and spiritual service.