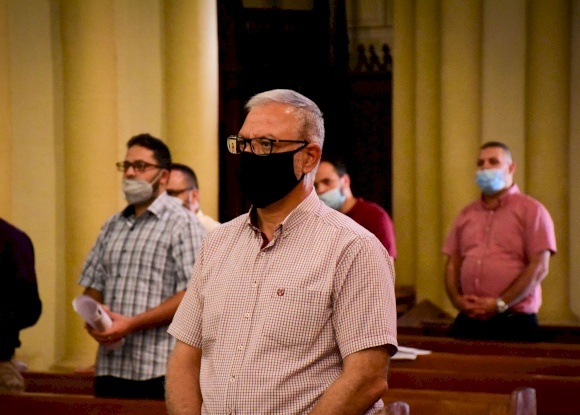 However, what has become clear is that the advanced economies, who have developed health systems, seem to have suffered the most, and whose nationals seem to have the greater difficulties to cope. In this regard, I look at local communities in the Middle East with depressed economies, some having to deal with issues of occupation, closures and blockades, and serious travel restrictions, dysfunctional heath systems, and so far these communities seem to have coped well with the pandemic and its effects. In an ironic way, and as an example, our parish in Gaza was one of the very few that was able to conduct large scale summer camps for its youth given that Gaza until recently had no local cases. Afterall, there was one positive effect to the 13-year-old blockade on Gaza!

As an update on the health situation, after the early strict restrictions in Palestine, Israel, and Jordan and what appeared to be containment to the spread of the virus, with the subsequent relaxation came a resurgence that is very worrying. In Israel, there are today around 115,000 cases and the death toll is over 900, while in Palestine despite a tight lockdown and limitive emergency regulations, the cases today are some 23,000 and the death toll is around 150. Even Jordan that fared much better than its neighbors witnessed an increase with just about 2,000 cases and 15 deaths so far. What is also clear is that people in general are fed up with the various restrictions and seem to have become careless about the health and safety regulations. This has become evident as a return to large gatherings and wedding banquettes seems to have become the main contributor to the fast spread. The worry is that should there be a need for further general lockdowns, there will be serious issues with compliance.

Let me reflect on the generous support received in response to the two appeals launched to help us deal with Covid-19 related issues. The response to the first appeal launched on behalf of the LPJ by the Grand Master of the Order of the Holy Sepulcher of Jerusalem His Eminence Cardinal Filoni was most generous as various lieutenancies around the world rushed to collect generous funds to support their brothers and sisters in the Holy Land. It was an incredible show of solidarity knowing that this is a global pandemic with suffering around the globe, yet dedicated members of the Order found it befitting not to forget their fellow Christians, in some instances overlooking their own local suffering along the way. As for the second appeal launched by Archbishop Pizzaballa on behalf of the LPJ schools in Palestine and Jordan, again the response was most generous and certainly surpassed expectations as various individuals, diocese, and even governments came to the rescue and gave generously. Between the two appeals, over two thousand families have been supported so far through providing food coupons, hygiene and baby supplies, electric meter card refills, and medicines. This was done through our parish priests and parish councils who worked with local authorities and charities to reach those most in need and avoid duplication. Additionally, as part to help families settle their financial obligations to the LPJ schools, so far 1,238 families have been supported in the Jordan schools and 1,180 families in the Palestine schools. The humanitarian aid and schools support numbers will undoubtedly double over the next few months as we continue to receive and disburse appeal funds.

In a very unique way, the community spirit that came together when the lockdowns and the crisis were at its highest was most evident, which enabled us to turn what appeared to be a very dark financial projection into relative stability for the time being. It was not only the appeal results that were a blessing, but the local modest contributions of the local communities and our own people within the LPJ extended family. Bishops, priests, and sisters gave up voluntarily part or all of their modest monthly stipends; hundreds of staff voluntarily gave back part of their salary; and all school staff agreed to defer payment of part of their salary to enable us to be able to pay salaries and keep our doors open and our operations functioning for as long as possible. This enabled the LPJ to retain 99% of its 1,850 employees at full capacity, giving them a sense of security and continuity at a time when for many of our employees, the pandemic effects hit home as many spouses lost their employment as a result of the pandemic. Though we were able to do this so far, we must be realistic to acknowledge that this may not be sustainable in the future if the health and economic effects become critically worse in the coming months. Our plan continues to be to retain full capacity of our staff for as long as realistically possible, so as not to add to the suffering of our staff and local communities.

As for the schools, they have done a heroic effort concluding the 2019/2020 academic year through distance learning. Though this is not an ideal mode, through good preparation and a dedicated cadre, it was possible. The end results of those who sat for the standard governmental exams was excellent and either matched previous years results or surpassed them. The lessons learned during that period are being reviewed with an effort to upgrade the hardware and software needs as well as the capacities of teachers to enable them to be better equipped in the 2020/2021 year to deal with the various “blended education” models being promoted. This would require a combination of some in-class presence as well as online interventions. However, uncertainty surrounds the best planning as we are all subject to the developments on the health front, and the best plans could be put on the shelf overnight should there be further deterioration on the health situation. However, what the pandemic has taught all of us is patience, flexibility, and perseverance. These qualities are needed if we are to serve our communities optimally in the future.

Despite all the difficulties, lockdowns, and challenging governmental regulations and after a pause of about three months, work on the project implementation resumed. This was a necessary step so that some employment is generated in local communities to ease the suffering. The largest construction project being the church in Jubeiha received a special exemption from the Jordanian authorities and work resumed in June despite the lockdown. Progress has been steady, and the completion of the project is now within reach. It is hoped that the Church will be inaugurated during the first visit of His Eminence Cardinal Filoni to the Holy Land when travel restrictions and schedules allow this. This has the potential to be the largest church in Jordan with a capacity close to one thousand faithful.

Finally, and as a reflection on the boring side being the administrative and financial restructuring that has been taking place over the past two years, I can proudly say that we are well into implementation mode. We do not have full success in all areas, but we have identified where there are shortfalls and they are being dealt with. Our structures today are built on professional standards with full transparency and accountability and are to be considered the envy of many local and even international church institutions. Additionally, the largest debt resulting from the construction of the university in Madaba owed and guaranteed by the authorities in Rome have been recently settled in full, relieving the LPJ of a major external debt. This did not come easy as the Church had to take the very painful decision to sell some properties in Nazareth to be able to accomplish this. Additionally, tentative plans are underway to settle the remaining local external loans, and it is expected that this can be realistically accomplished within the next 12-24 months. These developments will now allow the LPJ to look at the more strategic issues facing the Church in the Holy Land and work actively to find adequate solutions to the many challenges.

As unemployment hit unprecedented levels and as the suffering continues, and despite the lack of clarity on the political level as talk of annexation continues to be on the table, and as the prospects of the regular flu season soon are combined with the continuing pandemic spread; one has to concentrate on the many blessings that we continue to enjoy, and to know that we are not alone. Sound local decisions coupled with unprecedented generosity from around the world assures us that we are not forgotten and puts a heavier burden on us to continue with the sacred mission of the Church in the Holy Land. Many thanks to all who contributed financially to support us, but more importantly, many thanks to all who remembered us in prayer!