The Pastoral Office holds its third meeting in Jerusalem

JERUSALEM – On Friday, November 17, 2017, the Pastoral office in Israel and Palestine held its third meeting in Jerusalem, during which the topics of the family pastoral project were discussed.

The meeting dealt with the family pastoral project, which was introduced to the priests in their previous spiritual retreat on November 8, 2017, and obtained an initial approval. It was agreed that the priests would start to recruit families who will take on this path throughout the next year, emphasizing that it should start by the beginning of the new year 2018. Meanwhile, the priests will start to prepare for this project, which will entail choosing the families, contacting them and choosing the spiritual animators. The priests may also start implementing the visits program, which includes the formation of a team of priests, religious men and women and laypeople.

Reviewing the topics of the family pastoral project

The pastoral office regional members have prepared different topics: Bethlehem – the relationship with the partner; Haifa – the relationship with the children; Jerusalem – the relationship with the others; Ramallah – how to face crisis; Nazareth – the family’s mission in Church and society. Each group has developed the topics and agreed to set up 3 meetings to discuss each of them. The topics of each region were presented extensively, and were discussed and the members presented their remarks on each of them. Then, a small committee took the responsibility to overview these meetings on Sunday, November 26 at the Latin Seminary in Beit Jala, after which the topics, after amendments, will be sent to the parish priests for further examination.

What is required for the upcoming period? 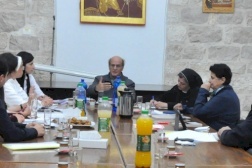