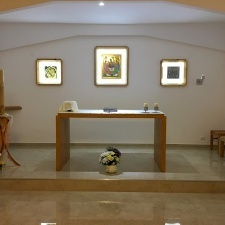 In Hebrew, the name Beer-Sheva means "well of the oath" or "well of the seven", in reference to the passage in the book of Genesis where Abraham makes a covenant with Abimelech by giving him seven ewe lambs (Gen 21, 22-34).

Today, Beersheva is the capital of the Negev, located 115 km southeast of Tel Aviv and 120 km southwest of Jerusalem. The whole area is the 5th largest population centre in Israel, and the city of Beersheva alone has over 220,000 inhabitants. The Ben Gourion University and the presence of an important industrial basin specialised in new technologies and medical-pharmaceutical products and services attract populations of all nationalities, origins and religions, a very strong link with Saint Abraham: "You will be the father of a multitude of peoples" (Gn 17:4).

In the 1950s, the French employees building the Dimona nuclear power plant asked to be allowed to attend Sunday Mass. Father Jean-Roger Héné, a French Assumptionist priest himself of Jewish origin, came regularly to celebrate the Eucharist in Beersheva for them and for some Polish women employed in the city. He was helped by the Sisters of Saint Joseph.

In 1990, a large parish house was built and a year later Father Paul Collin was appointed parish priest of the small community by Patriarch Michel Sabbah. Since then the house was enlarged and eventually also renovated. The successive pastors of the parish were Fr. Gioele Salvaterra and Fr. Piotr Zelazko.

The parish of Saint Abraham in Beersheva welcomes Israeli citizens and foreign workers, students or employees united by their faith and by their practice of Hebrew, with the serene hospitality of Abraham towards his three mysterious visitors.

Every day, 18:30 (Saturday in English, Sunday in Hebrew, Friday twice a month in Malayalam).Every Wednesday after the evening Mass: Holy Hour (Adoration of the Blessed Sacrament).