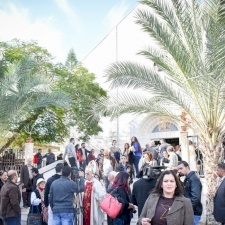 Introduction: Gaza is considered the poorest area in Palestine and one of the most densely populated areas in the whole world with about 5,046 persons per sq.km, combined with a high level of unemployment. The highest population age group is under 15 years (50.3%). Social problems are enormous and mostly concealed because of strong family customs and social context, where individuals have no right to freedom of expression. Christians represent 0.05% in this exclusively Muslim region. Gazans have suffered considerably during the past decade of political upheaval. Border closures, strikes and curfews were abnormally excessive in the Strip. The stagnant economy and many years of violence have severely affected the social and economic well-being of the family. Years of military control, frustrated life expectations and near poverty conditions have created a volatile society and open to wide swings in political instability. This creates insecurity and fears that contribute further to social deterioration.

Latin Patriarchate infrastructures : The Latin Convent includes a Latin Patriarchate school with 300 students, a kindergarten for 50 children, the parish priest house and the Church of the Holy Family. There are also two Religious Sisters’ communities within the premises, who help in the parish activities, and are responsible for two homes for children and elderly with disabilities. The Holy Family school in Gaza was built in 1974 by the Latin Patriarchate. It is considered the best school in Gaza, providing a high standard of education, cultural exchange, Christian atmosphere and provides religious instructions for Christian children. The school has about 657 students and, as everywhere in Gaza, it is overcrowded. The Rosary Sisters founded a school in 2000 and has more than 800 students today, 10% are Christians.