Karak Parish - Our Lady of the Rosary Church 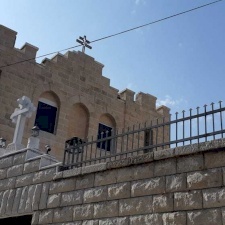 Kerak is one of the most important cities in southern Jordan, approximately halfway between Amman and Petra. It is better known for its massive Crusader and Islamic fortress, one of the better preserved in Jordan, dating back to the time of the first Crusades. The town, built on a triangular plateau about 900 m above sea level, is still inside the old Crusader walls, with the castle at its narrow southern tip.

The first priests in Kerak were Fr. Macagno and Fr. Bandoli who arrived in 1876. They settled among the Arabs, living in tents, and Fr. Bandoli soon started a school, which makes it the second oldest of the Latin Patriarchate schools in Jordan. The house for the priests was built in Kerak in 1897, followed by the completion of the boys’ school in 1900 and the girls’ school two years later. The Rosary Sisters arrived in the parish in 1904 and took over teaching the girls. The kindergarten was built in 1972 and at the same time, an extra wing was added to the main school. The elementary school remains in the original buildings located in a very confined space with houses almost attached to the boundaries on three sides. The playground space is very limited and split into two areas of different levels connected by steep steps.