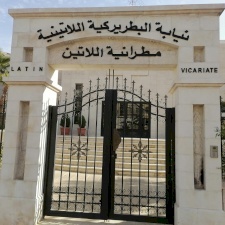 In 1848, one year after the restoration of the Latin Patriarchate of Jerusalem, what was then Transjordan was home to a predominantly nomadic and Muslim population. Most of the Christians were of the Orthodox rite. When the Latin Patriarchate began to expand across the Jordan river, two first missions were founded, respectively in Ermemin and Fuheis. Little by little, parishes multiplied: Kerak, Madaba, Hosson, Ajloun, Anjara... Today, Jordan has the most parishes in the entire diocese of the Patriarchate. It also hosts important pilgrimage sites, such as the Baptism site (Maghtas) or the Marian Shrine of Anjara.

In 1950, the new State of Jordan was officially consecrated by King Abdullah. Many Catholic refugees found a new home there, which modified the structure of the patriarchal diocese. At the same time, cities such as Zerka and Amman found themselves submerged by a phenomenon of rural exodus. While some communities withered away due to strong emigration abroad, others flourished and grew. Amman, for example, which in 1940 had about 500 faithful, has 16 times more twenty years later.

Today, the Christian community in Jordan represents between 3 and 6% of the country's population. It is divided into different rites: Eastern Orthodox, Orthodox, Eastern and Latin Catholics, Anglicans and Protestants. Very much protected by the Kingdom, this community, in particular the Latin Church, has in return the possibility to develop numerous social and educational infrastructures that benefit the whole population.