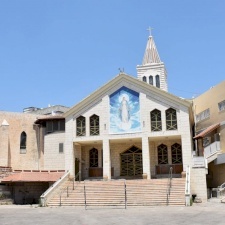 Over the whole region, the Latin Patriarchate has not only churches, but also schools and centers for socio-educational and sports activities, as well as playgrounds, sports fields and parish houses. Twenty schools are run by the Latin Church in Israel (not including Jerusalem). Some of them are administered by the Latin Patriarchate, while the others are run by the Franciscans and different other religious congregations. There are also two institutions for special education, one in Nazareth, the other in Haifa. All these infrastructures allow the organization and development of liturgical, pastoral and educational activities, which support and unify the Christian communities. They offer an opportunity to serve the society in which we live, witnessing the charity of Christ and spreading a message of peaceful cohabitation.

Together with the Arab Christians, in the territory of the Vicariate of Israel, there are also communities of Hebrew-speaking Catholics, under the authority of the Saint James Vicariate, as well as an important number of migrant workers (Filipinos, Indians, Sri Lankan, Africans, etc.) and asylum seekers (essentially Eritreans and Sudanese), whose pastoral care is entrusted to the Vicariate for Migrants.