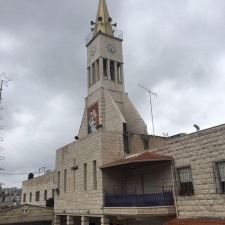 St. Joseph Parish was established in 1878 in Old Reneh together with the boys School. In 1922, a new branch of the school was opened for girls after the arrival of the first two Rosary sisters in the town. In 1927, an earthquake hit the area and Reneh the village that sustained much damage. After this, the Christians started to build their houses in what is known today as ‘New Reneh.’ In the 50s, most people were living in New Reneh while the School and Parish remained in the Old Reneh. Subsequently, the Latin Patriarchate bought land in New Reneh and the current School was built and the name of the Parish was changed from St. Joseph to St. Joseph the Worker. In 1971, Scouts groups for girls and boys were established and continue to operate to the present day. Different prayer groups, and activities for different ages including kids, youth and old people are provided in the Parish.