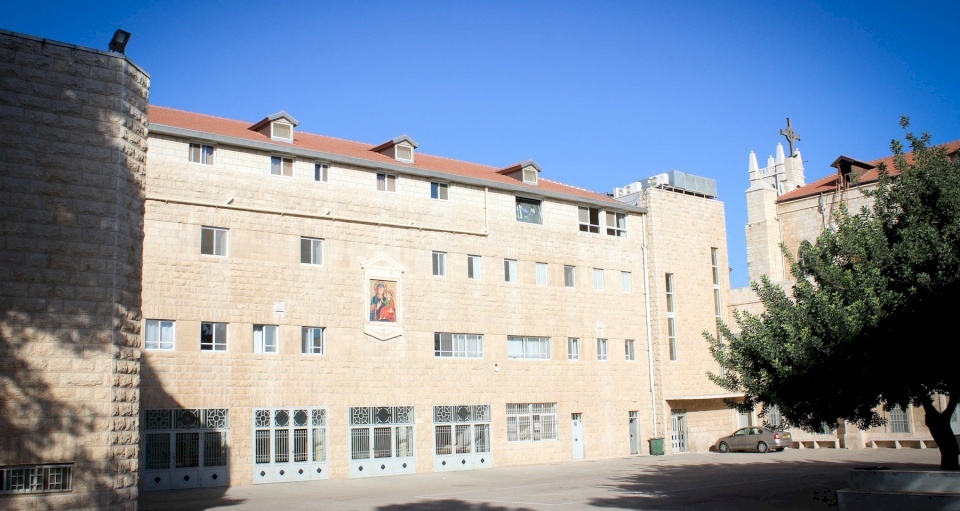 The Latin Patriarchal Seminary has welcomed and formed candidates to become diocesan priests in the Latin Patriarchate of Jerusalem and in other dioceses for over a century and a half. Patriarch Giuseppe Valerga founded the Seminary in December 1852 with a truly Catholic vision: to form local Arab Christians and young men coming from abroad to be diocesan priests for the Patriarchal Diocese of Jerusalem. Because of the circumstances the seminary was transferred to Beit Jala on September 7th, 1857. Since July 7, 1936, it has maintained its principal base of operation there.

The formation of future priests was entrusted to the clergy of the Latin Patriarchate until the First World War. Because of the war the seminary was deserted and only three seminarians returned to be ordained priests, after which it was temporarily closed for much needed renovation. Patriarch Barlassina reopened the Major Seminary in 1920 with 7 seminarians, and in 1921 he reopened the Minor Seminary with 18 seminarians. Many of the Patriarchate's priests had died or had been forced to leave during the Great War, for this reason, in October 1921, H.B. Barlassina entrusted the seminary to the good care of German Benedictine monks from the Abbey of the Dormition. In 1932 the Fathers of the Sacred Heart of Betharram, a French congregation, took the place of the Benedictines. In 1976 the ministry of formation was once again entrusted to the diocesan Patriarchal clergy.

Currently the clergy and staff of the seminary are entrusted with both the minor and the major Seminary. The minor Seminary brings together young people, from all regions of the diocese, who are interested in exploring a vocation to the priesthood. Students in grades 9 through 12 are given a traditional academic formation and are gradually introduced to a life centered on prayer, community and discernment. The rigorous academics in the minor Seminary, along with the spiritual and human formation which the seminarians receive, prepares them to enter the major Seminary or to pursue other studies.

Formation in the major Seminary is more than just a course of study; rather it is a journey through several distinct stages of development through which the seminarian immerses himself in the spiritual and communal practices which are essential to the Catholic priesthood. Through liturgy, prayer, teaching, and community life, the seminarians learn to live in God's presence.

The seminary has been affiliated with the Pontifical Lateran University in Rome since May 3, 1967. This affiliation enables the students who complete the program to receive a Bachelor's degree in Theology. In 2010 the seminary was officially recognized as an Institution of Higher Learning by the Palestinian Ministry of Education; this entails that the Bachelor's degree awarded to the seminarians is officially recognized by the State of Palestine. The curriculum in the major Seminary comprises a propaedeutic year for spiritual formation, discernment and the study of the French language, two years of philosophy, one year in Saint Joseph's Seminary (New York), three years of theological studies, a year of pastoral experience and one year for preparation to ordination.

The programs of study and of formation are based on the Ratio Fundamentalis (2017), the Apostolic Exhortation Pastores Dabo Vobis, the Ordo of the Pontifical Lateran University, and the Ratio Studiorum of the Seminary which was updated in 2016 and published in the General Academic Calendar. Courses are taught in Arabic, English and French.

The patron Saints of the Seminary are Our Lady of the Immaculate Conception, Saint Joseph, Saint Francis Xavier and Saint Therese de Lisieux. With such good patrons and with the grace of God, the seminary has formed 289 priests, including 15 bishops and 3 patriarchs: Giacomo Giuseppe Beltritti, Michel Sabbah and Fouad Twal. Founded mainly to train local clergy, the seminary has traditionally been, and remains, open to students from other institutions and countries who wish to prepare themselves on site for the service of the Church in the Holy Land.