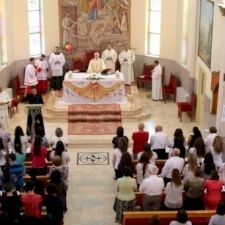 Taybeh, a Palestinian village, located in the center of the West Bank, is 30 km from Jerusalem. From its elevation (920m) and location between biblical Samaria and Judea, it overlooks the desert wilderness, the Jordan Valley, Jericho and Dead Sea. Taybeh is one of the most ancient places in Palestine, dating back to the Bronze Age and is mentioned in the Old Testament as Ofra. It is Ephraim, the village in which Jesus chose to stay with His disciples before his Passion. The original Church of St. George, built by the Byzantines in the 5th century and rebuilt by the Crusaders in the 12th century, lies in ruins on the eastern outskirts of Taybeh. Surrounded by Muslim villages, Israeli settlements and military roadblocks, Taybeh’s 1,300 inhabitants are intensely proud of their Christian heritage, their folklore group and Choir. Today, Taybeh is the only Christian village in Palestine with 100% Christian population.

Infrastructures of the Latin Patriarcate

In 1869 the Latin Patriarchate established a second school in Taybeh. This school was divided into two parts, one for boys (25) and one for girls (15). In 1966 the “two schools” became co-educational. It became a secondary school in 1978, facilitating the enrollment of many students from the neighboring villages. The school has two floor-levels, a yard and playgrounds for basketball, volleyball and handball. It comprises all the stages of learning, from kindergarten through secondary, offering both literary and scientific streams. Since 1978, 20 groups have graduated. The school has a total of 31 teachers, both male and female, while two religious sisters are responsible for religious education. It has a modern library that contains at least fifteen hundred books of both English and Arabic languages.

“Taybeh’s Peace Lamp initiative was launched in Taybeh in 2004. This initiative all started from the following analysis: In the terrible conflict that harms the Holy Land, Israelis and Palestinians have tried all possible means of action to put an end to it, using both violence and non-violence, but with little success.

Thus, the lamp, together with the oil and the light, becomes a message of peace from our side and a sign of solidarity towards the Holy Land from the churches all around the world:

– This initiative also helps the Christian communities in the Holy Land to fight unemployment. These lamps are produced in Taybeh’s new ceramic workshop, and provide jobs to 20 young men and women who now earn a decent salary and can live with their families in dignity on the land they cherish.

– Finally, this initiative provides a needed marketing opportunity for the olive oil produced in the Holy Land

The “Lamps for Peace in the Holy Land” initiative was officially launched on November 16th 2004, in a ceremony during which it received the blessing of the Cardinal of Florence, H.E Ennio Antonelli as well as the one of the Latin Patriarch of Jerusalem, H.B. Michel Sabbah.

Our hope can be summed up like this: With 100,000 churches united in a prayer for Peace in the Holy Land, the Lord will hear His congregation. He won’t have the choice!!