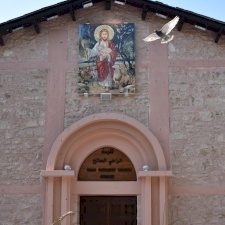 Located near the Jordan River, Jericho is a very ancient city whose oldest ruins are those of a settlement dating to 8000 years before Christ. The west bank of the river is for Christians the usual place for pilgrimages in memory of the baptism of Jesus by John the Baptist.

It was here in Jericho that the Lord Jesus gave Bartimaeus back his sight and converted the rich Zacchaeus, performing for both his ministry of the Good Shepherd. The few sycamores still left in the present-day city of Jericho remind pilgrims that Zacchaeus climbed up into the branches of sycamore to see Jesus.

In Jericho, there is also the Tel es-Sultan, a hillock standing some 15 meters high where Miss Kenyon carried out excavations in 1955-56.

The small Latin Catholic church is dedicated to Jesus the Good Shepherd: because Jesus really was a Good Shepherd for Bartimaeus and Zacchaeus. It is the parish church of a small community of 200 Arab Christians. Just a few steps away there is the Orthodox church, which has about 250 faithful. Two Catholic schools (one for boys and one for girls) bring together all the children of the Catholic and Orthodox families, as well as a good number of Muslim children; Jericho has a population of about 25,000 Arab Muslims.