Vicariate for Migrants and Asylum Seekers 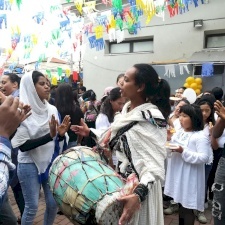 The work of the Latin Patriarchate with the Migrants and Asylum Seekers in Israel started to be structured and organized in 2011. It was in the wake of a visit to Jerusalem by Archbishop (subsequently Cardinal) Antonio Maria Vegliò, President of the Pontifical Council for Migrants and Itinerant People. In April 2011, the Latin Patriarchate of Jerusalem formally established the Coordination for the Pastoral among Migrants (CPAM) to direct the Church’s efforts in serving, organizing and catechizing the extensive population of Roman Catholic migrants in Israel, particularly those who are not taken care of by other Church bodies or religious orders and congregations.

In April 2018, Archbishop Pierbattista Pizzaballa, Apostolic Administrator of the Latin Patriarchate, transformed the CPAM into a Vicariate for Migrants and Asylum Seekers (VMAS) under the responsibility of a Patriarchal Vicar who works in communion and in agreement with the Patriarch. He also erected the “Holy Family” personal parish destined to care for the migrants and asylum seekers in all pastoral, sacramental and formative aspects, having all the faculties that universal law grants to parishes.

The Vicariate for Migrants is served by Pastoral Workers belonging to the local Catholic Church who, following the example of Jesus the Good Shepherd, and moved by the Holy Spirit, are committed to accompany the pastoral work among migrants. To realize this vision, the members of the VMAS strive to answer the call of Pope Francis, addressed to the local Churches, to welcome, protect, promote and integrate our brothers and sisters who are migrants, asylum seekers into the life of the Church and of the society at large.

From 1990 to 2013, four Chaplaincies were established in Israel: the Filipino, the Indian, the Sri Lankan and the Ge’ez rite chaplaincies, all of them being presently under the responsibility of the VMAS. In addition, there are individual chaplains or specific priests for the Rumanian, Polish, Latin American, English speaking African, French speaking African, Korean and other communities. We also are in touch with the priests who accompany the Lebanese-Maronite and the Ukrainian-Byzantine communities.

In addition to pastoral care provided by the chaplaincies (liturgical, sacramental, social, etc.), the VMAS gives special attention to the second generation, sons and daughters of migrants, through different activities, such as Infant care, Catechism, After school programs and Youth programs. In view of this ministry, a few Pastoral Centers were established: the Pastoral Center Our Lady Woman of Valor (Tel Aviv), the Saint Joseph Center (Tel Aviv), and the Saint Rachel Center (Jerusalem).

To learn more about the Vicariate