JERUSALEM – On Thursday, June 21, 2018, in the Church of All Nations, Archbishop Pierbattista Pizzaballa ordained Benedetto Di Bitonto a deacon for the St. James Vicariate. The 37-year-old Italian is the first deacon fully trained in the Vicariate for the service of Hebrew-speaking Catholics.

A celebration for all peoples

On June 21, there was no other place possible than the Church of All Nations to ordain an Italian deacon serving the Hebrew-speaking Catholics of the Holy Land – but who come from different continents – within a diocese whose main language is Arabic. For Benedetto, nicknamed Benny, there is nothing to understand if it is not the only will of God to Whom nothing is impossible!

And this multitude of peoples was present to surround the young man from Naples: Filipino, Russian, Arab but also Jewish and Coptic Orthodox monks, all united in prayer for Benny to the sound of melodies and hymns in Hebrew. The Gospel, also read in Arabic, was able to bring together the priests and the Latin Patriarchate seminarians who came to concelebrate or attend the Mass of Ordination. Such a service in Hebrew was not difficult for the Apostolic Administrator who was, before being a Custos of the Holy Land, responsible for the small Hebrew-speaking community of Jerusalem.

From Rome to Jerusalem

For Benny, who grew up in a Catholic family, the first real call came at 18. After beginning his studies of comparative literature that led him to study Hebrew literature, he returned to the seminary in his diocese of Pozzuoli, at the age of 24, to discern his vocation. However, after a year, Benny resumed his studies in Naples. When he began his Ph.D., he put himself at the service of the Conference of Bishops of Italy and worked first for the Youth Service, then for the Liturgy. When, in 2009, his doctorate lead him to Jerusalem to study Hebrew literature, he met Fr. David Neuhaus and the Kehilla, which left a big impression on him. Benny completed his thesis in 2011 at the Eastern University of Naples, which authorized him to do a year of research in the Holy Land. The same year, after having accompanied a group of young people of the Vicariate in Madrid for the World Youth Days, he asked to return to the seminary to become a priest at the service of this cultural minority of the diocese, the Hebrew-speaking Catholics.

The diaconate: in the service of love

For Benny, there is no word to express his joy at putting himself at the service of love: “My ordination is very recent and so I have only served the altar and pronounced homilies very little, but I find it simply extraordinary, he says, and I look forward to serving myself fully in the months to come.” Service takes a large part of the life of this hyperactive person very invested in youth ministry and liturgy – he has already composed and written many hymns for the Kehilla. “I am always amazed when I see the young people we support grow and develop. I saw them as children and I see them today taking their place in the Church and becoming in their turn animators for the youngest, it is very beautiful and motivating,” explains Benny.In his homily, Archbishop Pierbattista addressed the new deacon in a very direct and personal way giving him five tracks for his new ministry:

For Benny, the diaconate – just like the priesthood – is also the time of prayer for and with all those who suffer. This is what he wants to keep in mind by wearing an alb marked by black stripes.This model of alb is not an invention of the new deacon but it originates from a liturgical habit that already existed in the Byzantine era and which appears on the famous mosaics of Ravenna. “A young Moroccan once told me that Jewish priests living in a small island in Morocco wore a black stripe on their white trousers to commemorate the destruction of the temple. Since I like this black and white contrast, the idea came to me to mark in my turn on my alb the desolation of many believers,” says Benny. For the young man who counts among his friends Arabs and Jews, this desolation is first the conflict that overcomes the country, and secondly, the lack of unity among believers.“In these stripes are the tears of all the families who have lost loved ones and the pain of those who do their utmost to see the Church finally united, according to the heart of God. I want to remember that in our joys, the world is always suffering and that in the liturgy I am called to pray, to bear the suffering and to entrust it to God.”Cécile Klos 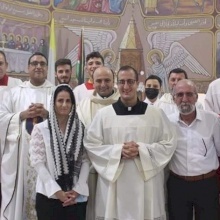 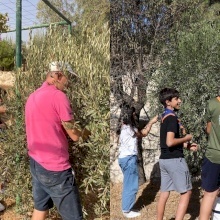 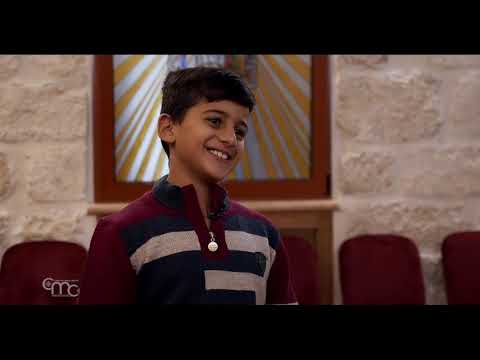 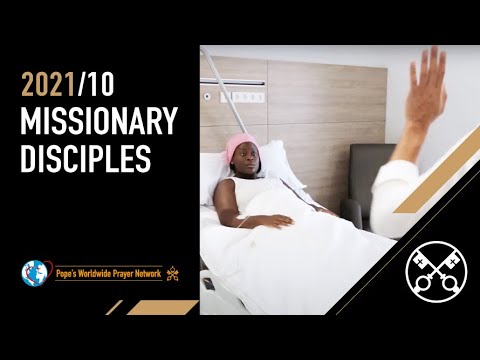