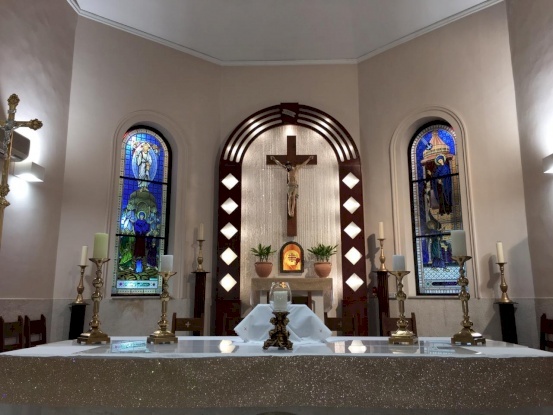 Fuheis lies in the middle of Jordan near the capital, Amman.

Fuheis is a little town of 24 thousand inhabitants, most of them Christians: 1/3 catholic, 2/3 orthodox. Most of its population works in trade, agriculture (especially olive trees), cement industry and civil or office jobs.

Arab Christians were there long ago before Islam, and they have remained during the subsequent centuries.

The Latin Parish of Fuheis was established in 1874 during the Ottoman era (Turkish), which ruled Jordan from 1516~1918. Because of the growing weakness of the Ottoman Authority, ignorance, poverty and illness increased in the nineteenth century, and the Latin Church confirmed its leadership in education. The parishes of the Latin Patriarchate prospered since the establishment of the Hashemite Kingdom of Jordan in 1921. So the country has gradually stepped into the age of modernization and development, but the people of Fuheis have not abandoned their authentic qualities that go back to the Bedouin roots, and their old spirit that goes back to the early dawn of Christianity.

The number of families of the Parish in Fuheis is 600 in addition to 300 Iraqi families that were welcomed there. There is one parish priest with a chaplain who serve the two churches of the Parish, Fr. Imad Twal and Fr. Salam Haddad. Masses are held on Sundays in both churches. The church has many spiritual and social activities, which enable every member of the society to participate and share the faith and experience. Beginning from little children, the young are Christian Youth of varying ages, also we have the Parish and school Committees and the Christian Ladies Associations. One of these associations, called “Rangers of Love”, gathers young people from the city who are committed in the environment’s protection; they often meet to clean the lands and forests and to raise awareness. All these activities include more than 300 people. The Latin parish in Fuheis is considered one of the most active parishes in voluntary work. You can find in Fuheis many associations that help to protect the local environment and spread cultural consciousness.

Todays, our schools consist of three stages: the kindergarten, the elementary school, the primary and secondary school. It is a complete school from kindergarten until Tawjihi and it is mixed. Its secondary stage students greatly succeeded in their exams. One of its female students has got the first degree in the kingdom. She is now studying at the Jordanian University and she got a scholarship from the school.

We trust in our schools in Fuheis and we believe in the necessity of a modern administration; to encourage the dialogue between the students, the administration and the teachers; to give the scholar activities a bigger role to promote the student’s personality and to develop his talents in order to be a good citizen and a committed Christian; to discover his role in the society. Therefore, our school graduates formed a committee to support the relationships with the school. Despite of their graduation, they stay related to us because we are like a family under the protection of the church that cares everybody.