Pastoral visit of the Patriarch to the USA 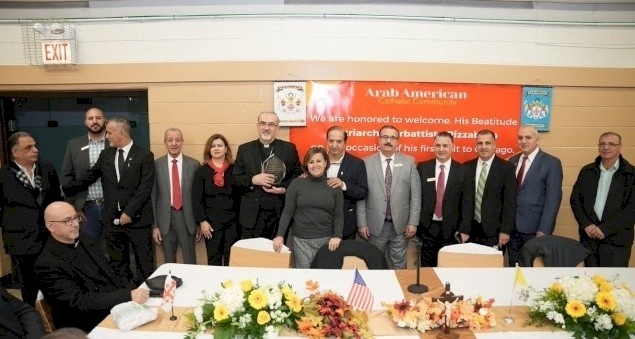 Pastoral visit of the Patriarch to the USA Available in the following languages:

USA – From November 14th to November 21st, 2022, His Beatitude Pierbattista Pizzaballa, Latin Patriarch of Jerusalem, made a pastoral visit to the USA to meet the Arabic-speaking communities that have migrated to the country, and to attend the United States Conference of Catholic Bishops (USCCB). 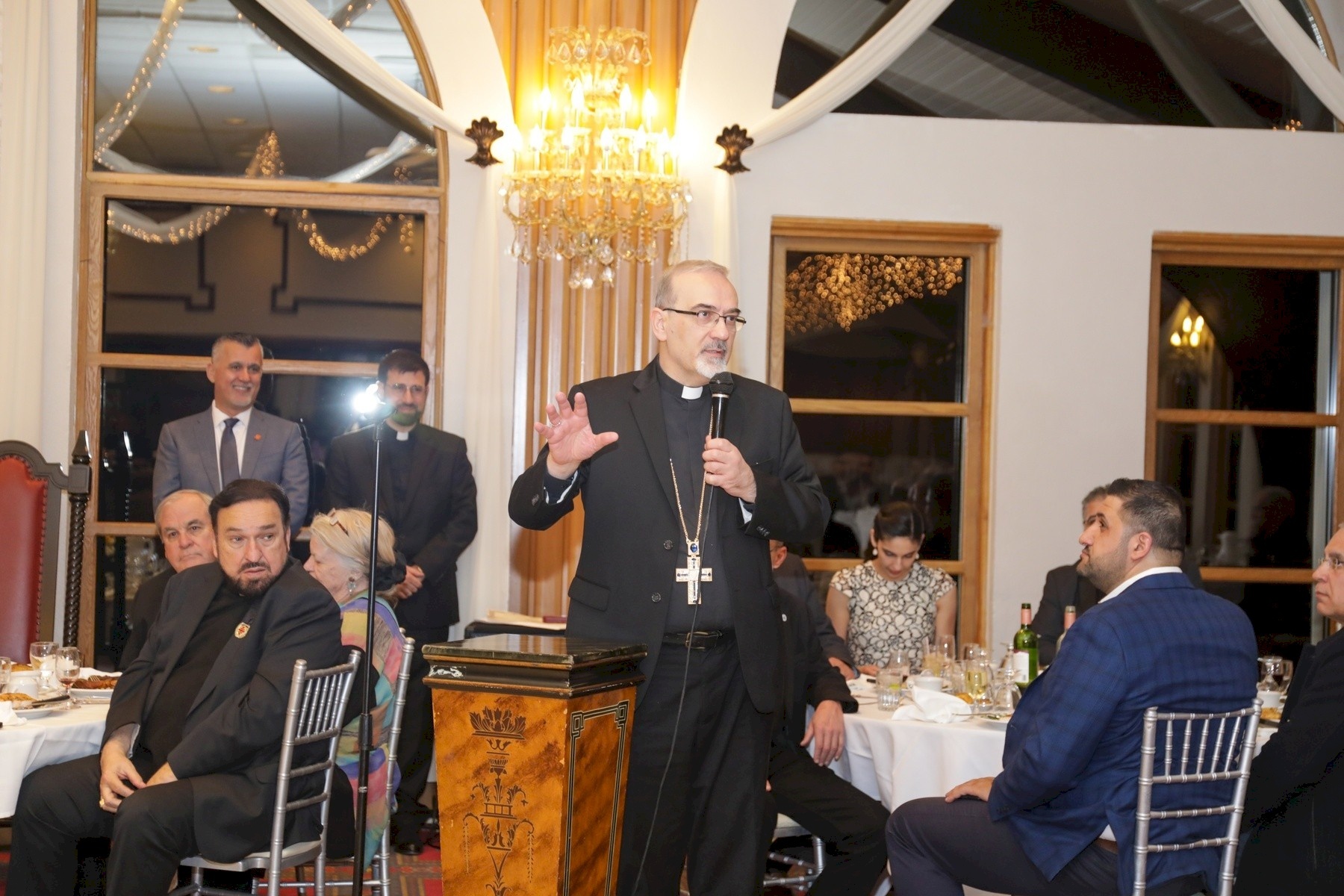 Welcoming evening in the city of Chicago

After being welcomed to the country on Monday evening by Knights and Dames of the Holy Sepulcher and members of the Arab Christian community of the area, the Patriarch visited on Tuesday the Mundelein Seminary of the Archdiocese of Chicago. Every year, students and teachers of this Seminary come to the Holy Land on pilgrimage, to discover the places at the source of the Christian faith and to meet the living stones of the Church of Jerusalem. They also visit the Patriarchal Seminary of Beit Jala and the Latin Patriarchate of Jerusalem, thus creating bonds with the diocese of the Holy Land. 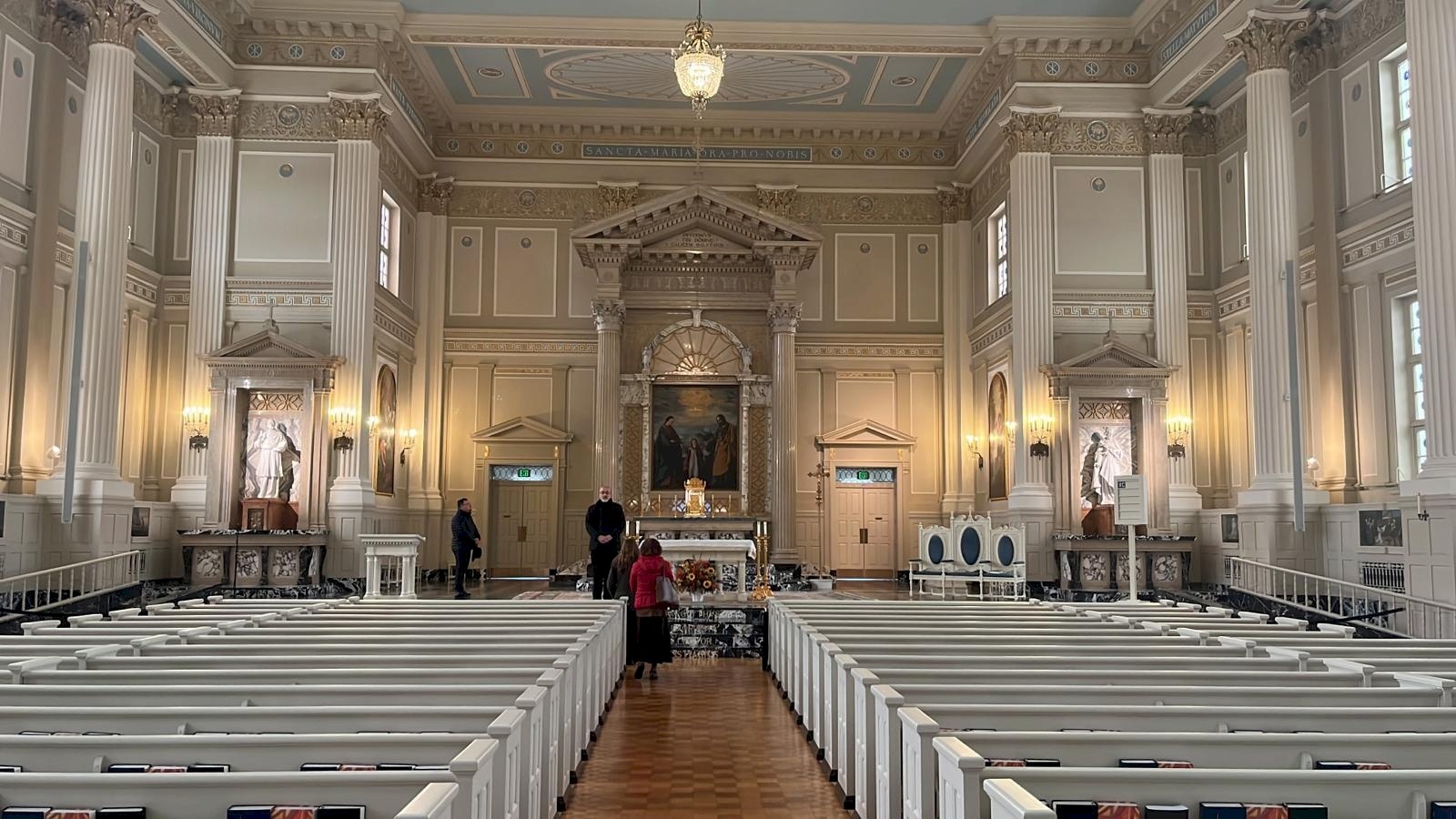 Inside the church of the Mundelein Seminary

Following the visit, His Beatitude was invited by a group of families originally from the Holy Land to meet the Arab Catholic community of Chicago, in order to “hear their testimonies” as Catholic Arabs living in the United States. He also presided over a Mass in the parish of Our Lady of the Ridge, attended by the community as well as Knights and Dames of the Order of the Holy Sepulchre. “Tomorrow I will participate in the assembly of the USCCB and meet with the clergy to see how to proceed and support our ministries,” he told them during his homily. “But I want you to keep in mind that if churches, schools and institutions are important, the most important thing in communities’ life is Jesus. It is around Him and His presence that you will be able to create community,” he added, echoing his previous comment on the Gospel and the story of Zacchaeus – how, despite his sins, Zacchaeus was able to find salvation through Jesus, when he welcomed him into his house and met him. “Because Jesus is life,” concluded the Patriarch. 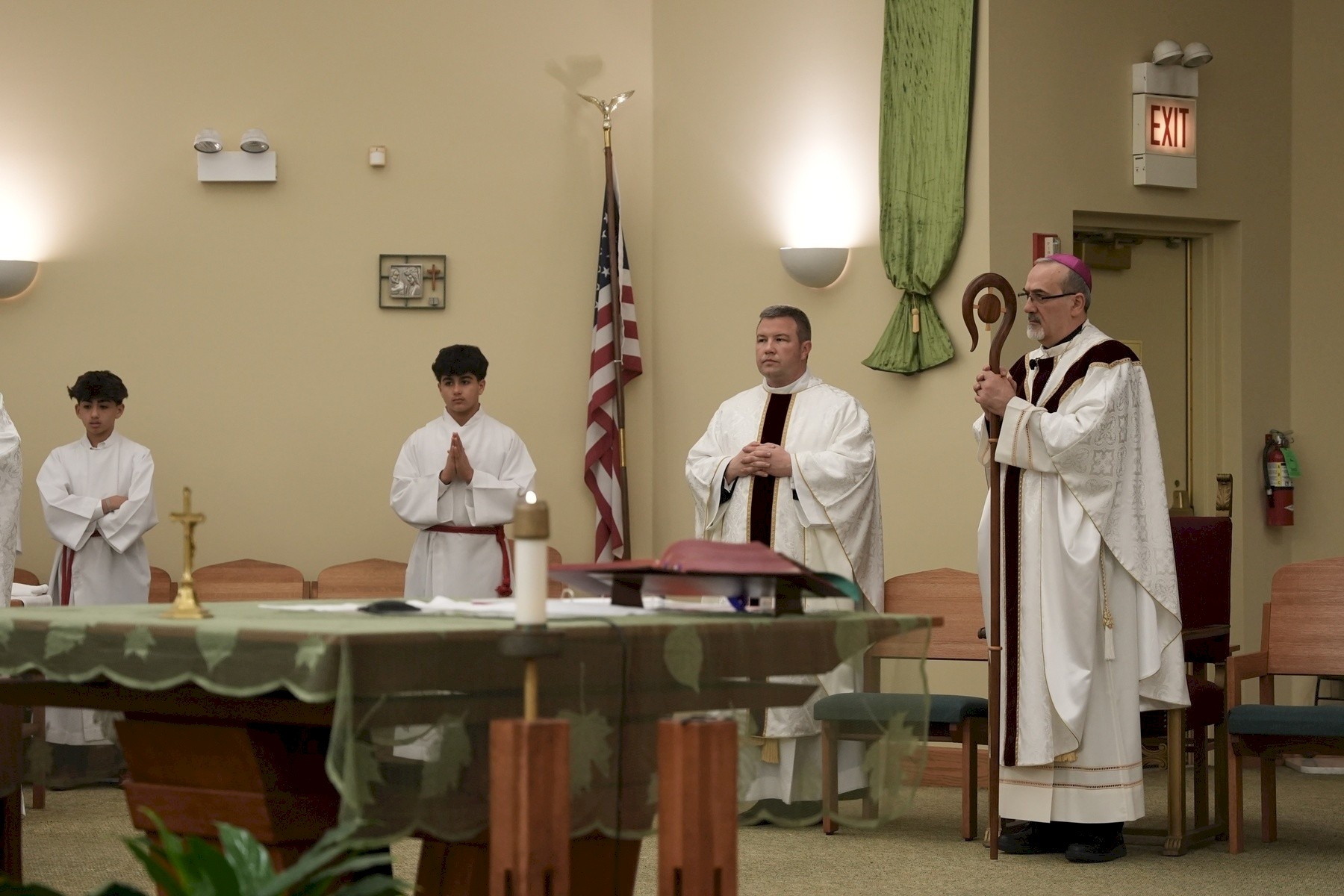 Presiding over the Mass at Our Lady of the Ridge

From Wednesday to Thursday, the Patriarch participated in the USCCB Fall Plenary Assembly that took place from November 14th to November 17th. Invited to attend notably to speak about the reality of the Holy Land, he concluded his speech by asking his audience “not to forget Jerusalem”, highlighting that, although Rome is the heart of the Church for the Catholics, “before, there was Jerusalem”. During the Assembly, he also met several bishops and cardinals, including Mgr José H. Gomez, current president of the USCCB, and attended a session on Catholic Reliefs Services and World Youth Day. 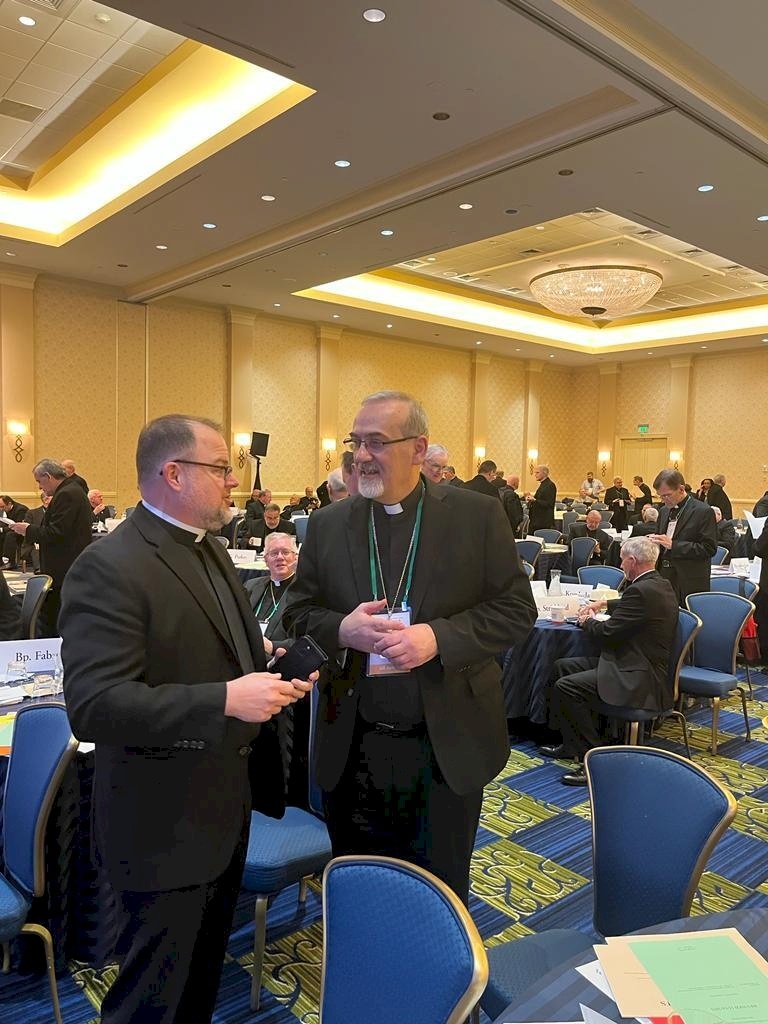 Meeting with the bishops during the Assembly

Then, on Friday, Mgr Pizzaballa presided over a Mass of investiture of Knights of the Order of Malta, a lay religious and humanitarian institution of the Catholic Church. Because of its founding history and because it conducts various projects and initiatives in the Holy Land, this Order shares strong ties with the Church of Jerusalem – as the Patriarch highlighted during the celebration: “In your identity and in your history, Jerusalem has a very relevant place.”

Almost eighty Knights, Dames and Chaplains were thus invested during this solemn celebration, presided over by Cardinal Archbishop of New York, Mgr Timothy Dolan, but whose homily was delivered by Mgr Pizzaballa. He reminded the future Knights that their charitable actions would not bring them closer to Jesus if they hadn’t truly met Him first. “If you meet Jesus, you will truly love men. Because loving Jesus means also loving all mankind, as we were created in His image." 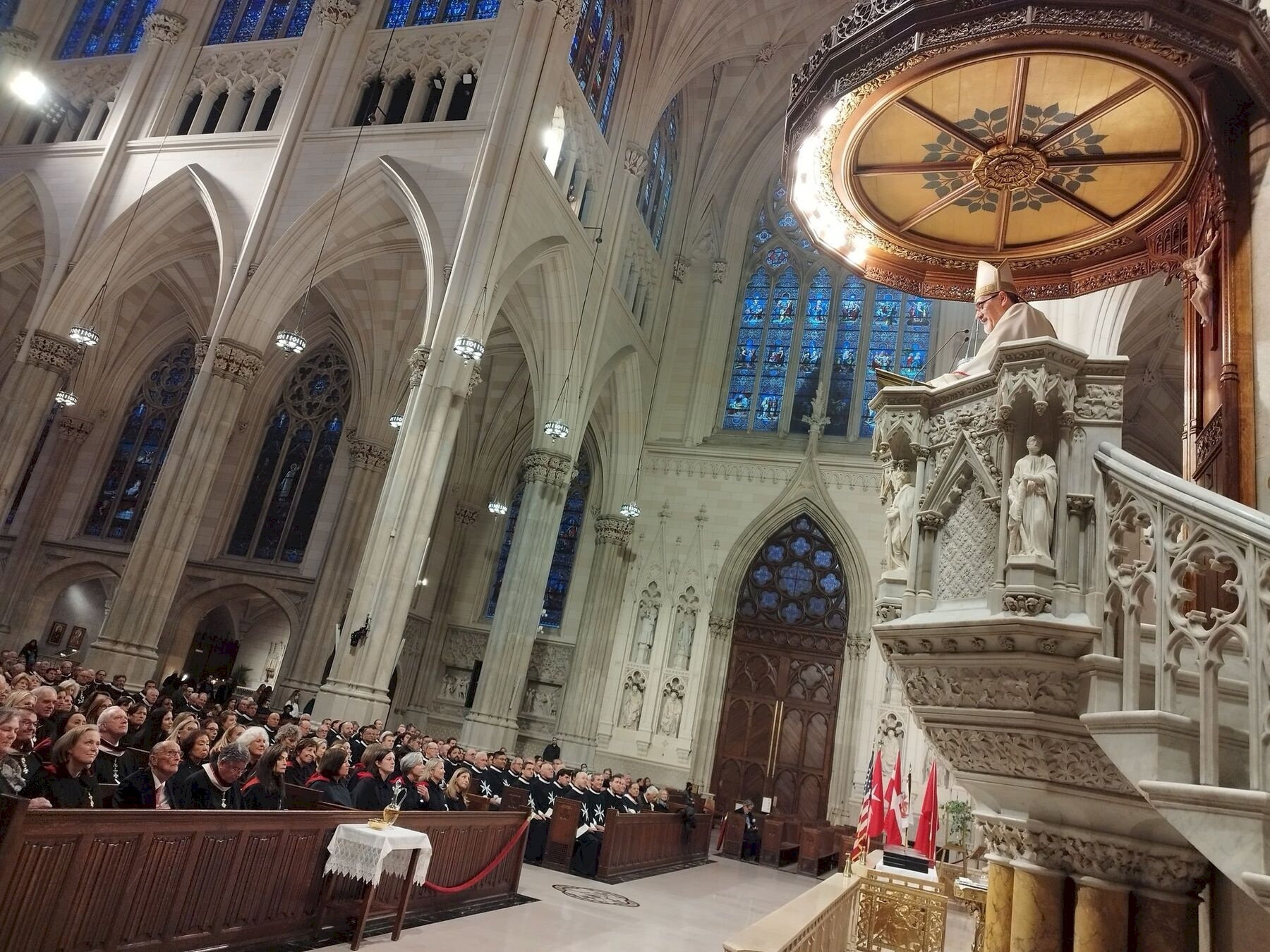 His Beatitude preaching during the Mass of Investiture

To conclude the week, the Patriarch then visited the Arab Catholic community of the parish of the Good Shepherd, where one of the Patriarchate's priests, Fr. Fares Hattar, is in function. It is as a service to the Church of the country, to help serve Arab-speaking communities in their mother tongue, that a couple of priests from the Latin Patriarchate are sent to the USA as Fidei Donum priests.

“Communities have no borders. To be a community, you need one heart,” Mgr Pizzaballa said during the welcoming ceremony to Yonkers, addressing the faithful of Fr. Hattar’s parish. Emphasizing on their belonging to the community of Jerusalem despite being physically far, he praised the people of Yonkers’ desire to be connected to the Latin Patriarchate and the local church. “I can see your heart is still there, in Jerusalem,” he said, insisting on the mutual support that the faithful, whether in the Holy Land or in the United States, should express toward each other. 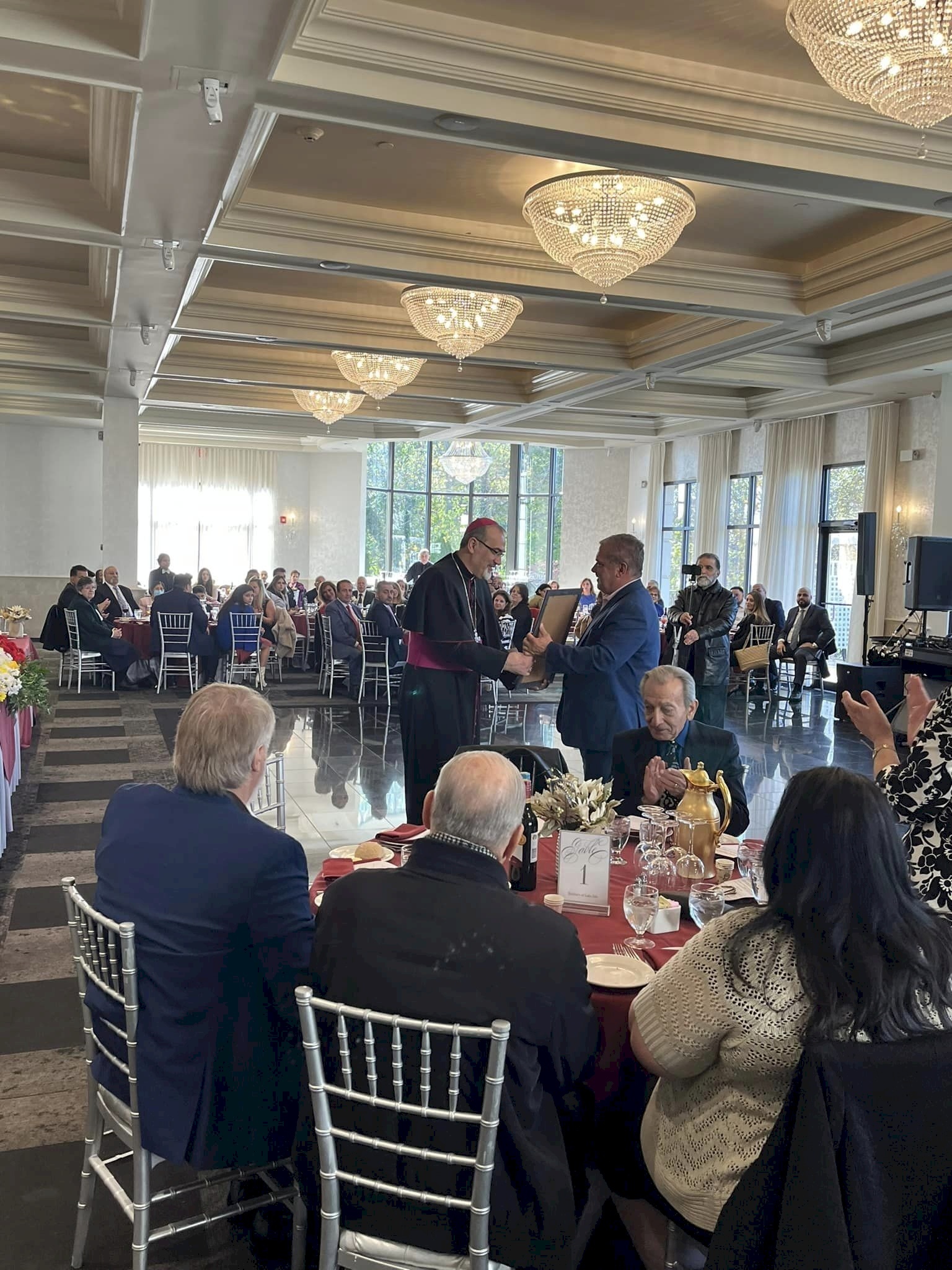 Welcoming ceremony to mark the Patriarch’s visit, during which the active members of the parish who have strongly supported and contributed to the community were publicly thanked and rewarded.

The next day, on Sunday 20th, the Patriarch presided over the Mass for the feast of Christ the King, during which several children were administered the sacrament of the first communion and confirmation. This celebration, which marked the end of this pastoral visit, was followed by a visit to the Saint Joseph’s Seminary, where one seminarian of the Latin Patriarchate, Fayez Ziadat, is currently studying for a year. 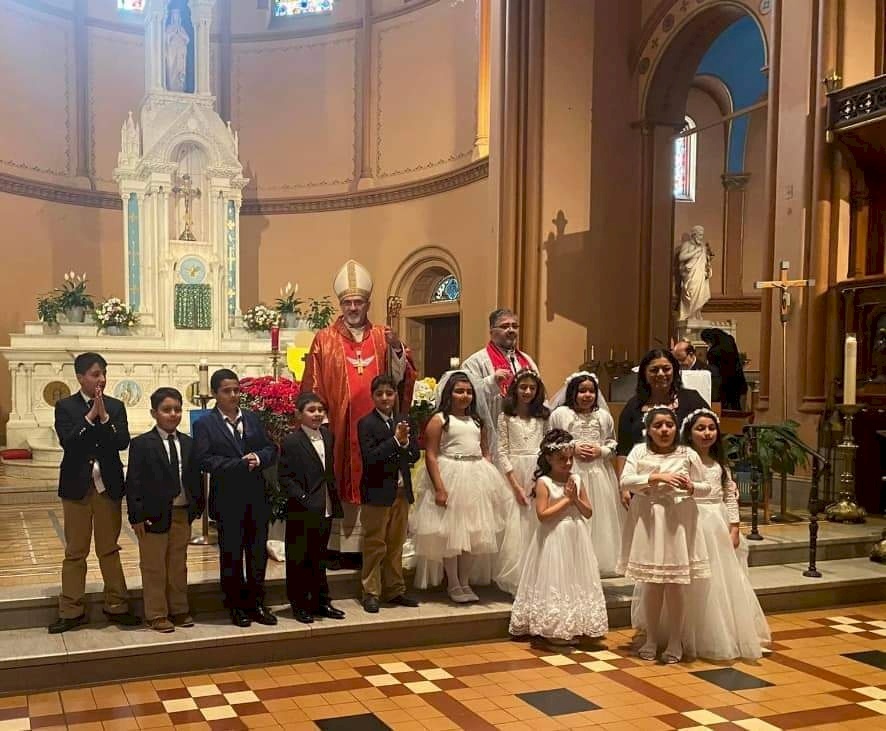 Mass of confirmation and first communion

“We were very fortunate to spend a day with Patriarch Pizzaballa during his visit to us,” said an AACC (Arab American Catholic Community) committee member in the aftermath of the visit. “We all agreed that maintaining our traditions, sharing our culture and establishing roots for many generations to come is no small feat in the great state of Illinois,” she continued, “but that many hands make light work. I am excited to see the impact we can make with the guidance and leadership of His Beatitude.” 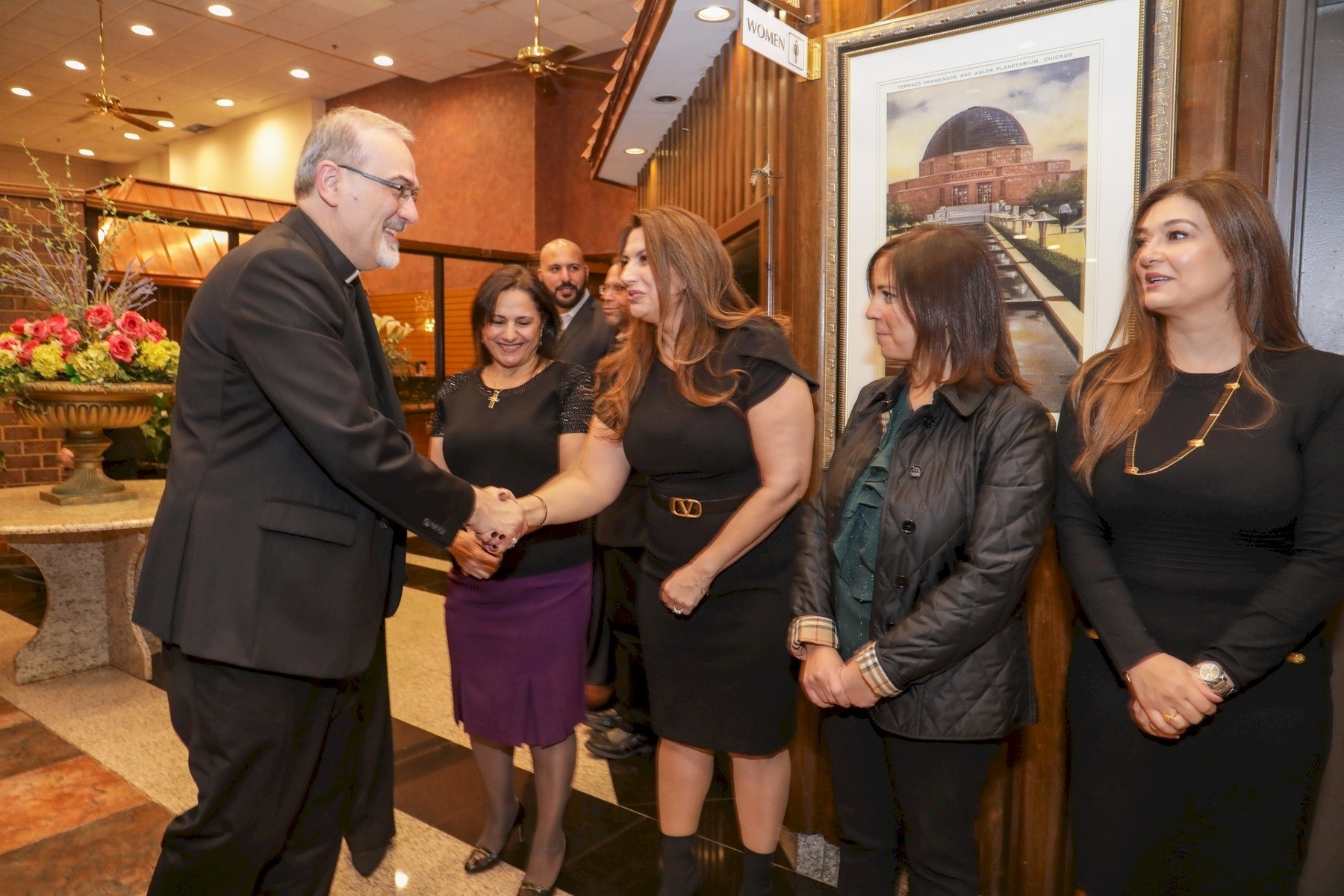 “As a first-generation Arab American Christian, there was always a struggle on finding a balance between assimilation and tradition,” she further explained. “How much do we have to give up without losing ourselves? I was lucky to have an educational journey that allowed me to be proud of my faith and to share it with others. I continue to share this foundation with my children while keeping our cultural traditions alive, as my parents did.”

To see all the pictures of the visit, please click here.