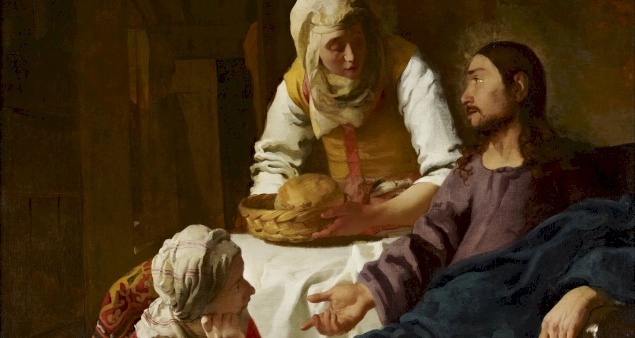 In the Bible, it is difficult to find a pair of brothers or sisters who do not have a problematic, conflictual relationship.

We come across beautiful friendships (see Davide and Jonathan), there are strong father-son bonds, husband-wife, even an example of a successful relationship between mother-in-law and daughter-in-law (see the book of Ruth).

Instead, the bond between brothers, from the beginning (see Cain-Abel), seems to be marked by specific violence, and the entire subsequent history only confirms this modality.

Today’s Gospel tells us about a couple of sisters who are not spared the trouble of confronting themselves with this dynamic. Jesus enters a house, two sisters welcome him, one sits down to listen, the other devotes herself to domestic duties, but then complains to Jesus: “Don’t you care that my sister left me alone to serve? Tell her, therefore, to help me” (Lk 10:40)

Let us allow ourselves to be helped by two other episodes of the Gospel to understand into this Word.

Luke reports the first event two chapters after this episode of Bethany, and it’s that of a man who approaches Jesus and asks him to arbitrate between him and his brother (Lk 12:13-21). And He does it using words very similar to those of Martha: “So, one from the crowd said to him, ‘Teacher, tell my brother to share the inheritance with me’” (Lk 12:13). They are two passages with many common elements: in both there are two pairs of siblings; in both there is a request to Jesus to act as an arbiter (exactly with the same words: “say to my brother”, “say to my sister”), and both end up with something that will or will not be removed. Mary has chosen the better part, which will not be taken away from her; and to the brother who claims his part of the inheritance, Jesus tells the parable of the rich fool, of whom, after accumulating so much wealth (which closely recalls Martha’s so much work), life is demanded (taken).

The second is a moment of storm, in the middle of the lake. The disciples fear for their lives, Jesus instead sleeps on the pillow at the stern. “They woke him up and said to him: ‘Teacher, don’t you care that we are dying?’” (Mk 4:38). In the words of Martha, the same expression resounds: Don’t you care? as if Marta’s problem was not so much being left alone to serve, but the fact that this doesn’t matter to Jesus.

Perhaps here, hidden in these references, are some problems that make living like brothers (and sisters) difficult.

The problem is that the siblings, by the fact of being such, are called upon to share a series of things among themselves: space in the house, affection of the parents, rights, and duties, up to the paternal inheritance … (“tell my brother to share the inheritance with me”).

Dividing rights and goods is problematic, but perhaps, even more, the dividing of duties: who is to do this? It is Martha’s problem: “tell her then to help me serve.”

Because my duty, exactly like the right of the other, in my eyes represents something that is taken from me, a part of life I have to renounce because of other benefits.  As if life were not enough for everyone.

And every time something is taken from us (or so it seems to us), even if minimal, it becomes for us a dramatic experience, because in some way it reminds us of that last moment when everything will be taken away from us, our life. It reminds us that we are mortal, and this is the drama of life.

It is the drama for which the rich fool accumulates so many things, hoping that these ensure his life. But life is not there.

Then accepting the presence of the brother (and his needs) is never taken for granted, it can give rise to some questions (will what we have be enough for both of us?) And also, some suspicion (Will the other not take advantage of it? Will he not take my share? Is it not that the other person’s life will eventually lead to my death?

The bond with his brother closely involves life and death; and, in particular, with the fear of death, with the fear that the other is a threat to my life.

Then, when the brother is perceived as a threat, the only solution is to eliminate him … It is Cain’s solution, and of others after him, and it is the temptation of many, if not all, sooner or later …

Martha’s greatness (unlike Cain) was the ability to speak of this drama directly with Jesus. It is the first step so that the bond may be evangelized.

Every fraternal bond (that between brothers, between clans, between ethnic groups, between peoples, between nations) needs to be evangelized, if not it lives only by fear of the other.

Evangelized, that is, brought back to the essential, to what Mary has chosen.

But what did Mary choose?

Mary simply chose to believe, just like Abraham in the first reading; to believe that when God comes, he does not come to take life, but to give it and that this life is enough for everyone.

The life that God gives is enough for everyone, precisely because He has conquered death, and for this reason, cannot be taken away.

Mary has chosen that life, and there is in it that attitude of freedom of one who is sure that our life matters to the Lord. Then it’s not necessary to do something for Him, but just sit down in order to receive.

It is an attitude that comes from listening, from sitting at the feet of the Master, and which liberates from a fraternal dynamic based only on rights and duties, on what is right, on what belongs to me, on comparisons and contrasts.

And since this essential cannot be taken away, Mary does not need to earn and is not afraid to lose.

A gesture of true love is possible only there, where the fear of death is won.

So, what does Jesus ask Martha? Not to give up household chores, or even to be distracted by the many things to do. He doesn’t ask her to do things without complaining, and He doesn’t ask her to sacrifice herself for everyone. He tells her that if she listens, He will transform her death into life, as He did with her sister Mary, as He will do with her brother Lazarus.

And this is the only way to find His brothers. 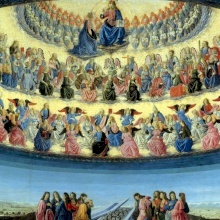 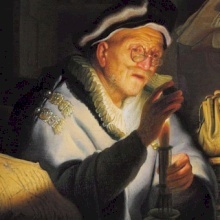 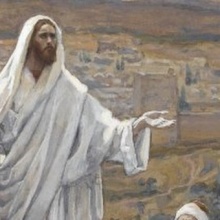