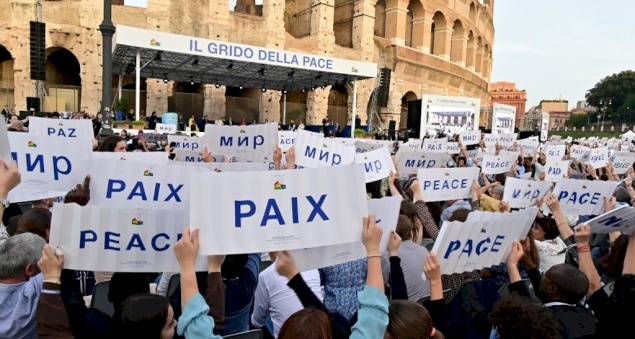 Religions, dialogue and the difficult culture of peace in the Holy Land Available in the following languages:

The Cry For Peace: Religions and Cultures in Dialogue

Talking about dialogue, peace and justice in the Holy Land is always exhausting. It is a task that we try to evade more and more often, both in order to avoid a certain kind of rhetoric, which for years has characterized meetings, discussions and assemblies of various kinds, and of which today everyone is somewhat saturated, and because dialogue and peace seem to be precisely a mirage that is becoming more and more distant, which leaves feelings of frustration and mistrust - if not rebellion and resignation - in the souls. For this reason, in recent years, we try as much as possible to avoid talking about it. I consider it more fruitful to speak of unity, of the capacity for good relations as something constitutive of the life of faith, among ourselves in the Church and with everyone else, rather than words like "peace and justice," "hope," "future," because in the Holy Land these words are heard as something distant from reality and therefore risk falling into triviality and thus into insignificance. I am increasingly convinced, moreover, that we cannot speak of hope if we do not have faith, because hope is the child of faith. To talk about hope today, without placing it in a context of faith and trust, is really rhetoric. After all, as the great professor Heschel said, the dialogue between faiths, supposes that there is faith in the first place[1]. It is therefore from faith that our discourse must be based. Rather than talking about religions in dialogue, therefore, I would prefer to use the expression "faiths in dialogue."

However, faith and religion are both necessary to each other. Faith is to religion what the soul is to the body. The experience of faith, which is foundational to the life of every believer and every religious community, also needs to be somehow "institutionalized," that is, to have shapes and languages that are recognized by the whole community of that same faith. However, faith and religion are not always in harmony. It may happen, in fact, that those who live the experience of faith do not want, do not feel the need for or even reject institutional forms, that is, religion and its history and rituals, as if it were a kind of contradiction to the experience of faith. This is what is perceived quite commonly, especially among the younger generation in Western countries, but also increasingly in the Middle East. However, the opposite can also happen. It can be the religion, that is, the institutionalized form of faith experience, who "forgets" its origin, and appears, in its visible and external form, predominantly only as a form and institution and not as a place where faith is welcomed and expressed, understood as an experience of encounter with God, of a life nourished and sustained by the presence of the providential and merciful God. Perhaps this is one of the reasons for the rejection of religion - but not of God - by many young people.

In the Middle East, and particularly in the Holy Land, we experience such thing on a daily basis. Religion has taken on a very intrusive institutional structure, as it penetrates the ordinary life of the different communities that make up our society. It determines not only the boundary between communities, but also the civic life within each of them; it is often decisive in political choices and more generally in the governmental political life. In the Holy Land, in short, the community dynamics, and their respective choices, are marked and defined by different religious affiliations and by the different religious leaderships. Their task lies mainly in "defending" their own boundaries identities, their respective historical and religious narratives and, let us admit it, their own power. Defending the identity boundaries and their own religious narratives, moreover, also means defending precise political choices, with
obvious consequences in the life of the territory and the communities that inhabit them, Palestinian and Israeli.

All this makes dialogue between religions very difficult, since it is never only an interreligious dialogue, but also a dialogue with political and social implications. The coexistence among religions, in short, coincides with the coexistence among the different civil and religious communities in society. And in a situation of conflict, such as ours, the
religious leader who talks about dialogue, peace and reconciliation between the religions of the land can also easily come to be seen as one who gives up the defense of his own community's rights, or as a utopian, detached from the real life of the country.

What to do then in such a context? In the Holy Land, is it still possible to purify religious experience from its various "political contaminations"?How to make sure that faiths and religions return to being first and foremost places of encounter with God and, consequently, also of human harmony?

It must be said that even the Holy Land, as other parts of the
world, is a land where we easily encounter religion as an element of crystallization of religious, political and social relations; but it is also a Land rich in many authentic religious experiences, where groups, movements and associations, religious in character, want to return to the original experience of their own faith. They desire a life, that is, where faith shapes existence, and is quite distinct from political ties or other forms of power. Even in this case, however, it is good to be careful. Returning to the original experience of faith is not free from the risk of extremism, as we must unfortunately recognize. But this is a separate issue that we are not interested in addressing now here. If we must admit, in short, that institutions religious are not spared by problems, it is nevertheless also true that in society there are "antibodies," that is, there are people and places where faith is still an opportunity for encounter and sharing.

Simple citizens, religious and not, and many people and associations who seek together to show love and attachment to their faith and their land, which is made up of of places and people, with their stories and traditions, do it through common initiatives or simply through relationships of friendship, which transcend the rigid boundaries of identity and religious affiliations. This is not the time for grand gestures in the Holy Land, it is not the time - I repeat - to expect from the religious and political institutions capacity for vision and prophecy. The institutions will come, sooner or later, but in the meantime, it is necessary to work and operate where the people are willing to get involved, to consecrate time cleaning the face - too often disfigured - of their own faith and religion, through their initiatives of dialogue and encounter, prayer and sharing.

There are initiatives of a more civic nature and others of a more religious one, all united by the desire to give concrete expression to encounter and dialogue.I am thinking, for example, of the Jerusalem Intercultural Center. Composed of Israelis and Palestinians, Jews, Muslims and Christians, it works to improve the lives of the inhabitants of the holy city, regardless of their affiliations. We then have the Christian schools in the city. It is one of the significant contributions that the Christian community offers to its fellow citizens. There are almost ten thousand students who pass through our schools, mostly Muslims and Christians, and who are given the opportunity to grow, study and develop together. But also known is the initiative of the Hand-in-hand school network, where Israeli and Palestinian children study together. If the institutions tend to see only their own religious narrative and to deny that of others, that is, if people do not want to recognize differences, being together at school, each with his or her own identity, becomes a meaningful gesture. In this way, those schools educate indirectly to welcome and respect each other and each's own identity. We are not obliged to share opinions, but we can respect them. Friendship is not constrained within the boundaries of one's identity, but goes beyond it.

In short, there are countless initiatives of training and information organized by various associations, public and private. These are just some of the examples of life existing in the Holy Land. Beneath the surface of disputes and divisions, of the various statu-quo, flows a river of beautiful humanity, of men and women who put themselves on the line to give expression to the desire rooted in their hearts for love to God. People who desire to meet the brother and sister who lives next door and who refuse to believe that they are a stranger or even an enemy. They are not content to live by stereotypes, but ask themselves questions and seek answers directly and sincerely.

That is where our hope still rests today. And in this sense, the Holy Land, contrary to what is thought, can indeed truly be a model of coexistence and dialogue. Only the superficial spectator will limit themselves to the usual considerations of the difficulties and divisions in the city, which, although real, do not express the whole truth. The attentive observer will be able to recognize, beneath the complex surface of the social life of the city, a world full of wonders and richness.

I will conclude by saying that, yes, at this particular time, the major religious institutions are perhaps struggling. And yes, it will take time for them to regain the necessary freshness and freedom, which, however I am sure will come one day. We must admit this, without being under any illusions. But this does not mean that faith experiences are not capable of words and gestures of prophecy. Prophecy today means having the courage of parrhesia in places of injustice and pain, but it also means having the courage to hope, to trust, to feel a sincere desire for encounter, to reject all forms of fear. In a time where we live only the present, it means betting on a future that will be certainly different, built by our desire for peace. My experience tells me that this is still possible. We should not expect it from the big ones, but we can see it in the little ones. And it will be them, the little ones of the gospel, those institutions that I  mentioned, and so many others, unknown to most, but real and present in the area, that tell us that the faith still today can generate life, and desire for peace. 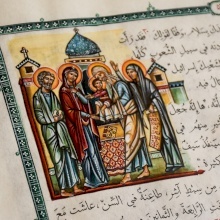 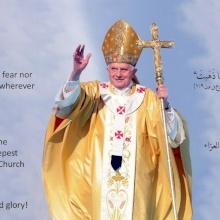 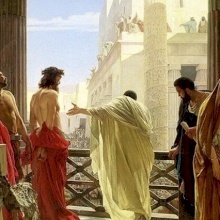