Easter 2022: A Palm Sunday without health restrictions or border closures 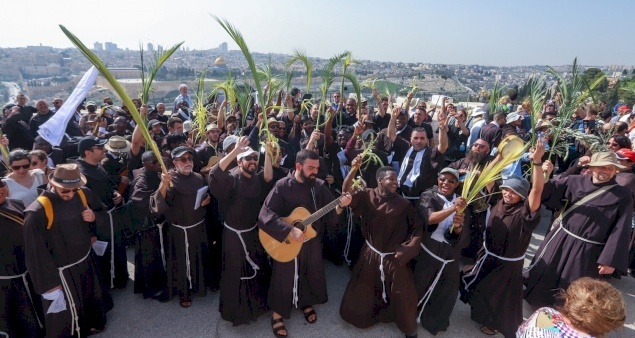 Easter 2022: A Palm Sunday without health restrictions or border closures Available in the following languages:

JERUSALEM – Opening Holy Week, this year's Palm Sunday Mass and procession were marked by the return of foreign pilgrims, more than two years after the beginning of the Covid-19 health crisis.

In the Holy Scriptures, Jesus descends to Jerusalem from the Mount of Olives on the back of a donkey, a symbol of humility and peace (as opposed to the horse, which was usually associated with wealth and war), and which his disciples went to find in a nearby village. The crowd, who had come to Bethany to witness the miracle of the resurrection of Lazarus (which had taken place a few days earlier), welcomes him by laying cloaks and palm branches in his path.

Depending on the country and customs, the palm branches are sometimes replaced by laurel, olive, yew, fir, willow, butcher’s broom, boxwood or even coconut branches. In the past, in some Germanic regions, a wooden sculpture of Christ riding a donkey, equipped with wheels, was pulled through streets littered with palm branches. Today, in the Holy Land, Palm Sunday is traditionally celebrated with a morning mass, during which the faithful come to have their palm branches blessed, followed by an afternoon procession, starting at Bethphage (literally, "House of Figs") and ending at the Church of St. Anne, located in the Old City of Jerusalem.

This year, the Indian and Sri Lankan communities of the Holy Land celebrated their own "Palm Saturday", for those who had to work on Sunday and could not attend the procession that day.

The following day, after a beautiful Mass at the Holy Sepulchre in the morning, which brought together many priests from the Diocese of Jerusalem, Knights and Dames of the Equestrian Order of the Holy Sepulchre, local Christians and pilgrims, as well as religious men and women, more than 5,000 people gathered on the Mount of Olives to take part in the Palm Sunday procession of this Holy Week 2022. After two years of health restrictions, the celebration was able to take place as planned, to the great joy of all participants.

Opened with a message from the Youth of Jesus' Homeland, which recalled the role of young people within the Church and addressed a prayer to those who, due to lack of permits, were unable to travel to Jerusalem to participate in this Palm Sunday, the procession then saw the participation of many Christian communities of the Holy Land, in a joyful and festive atmosphere: Franciscans of the Custody, members of the St James Vicariate and VMAS, religious congregations, seminarians, foreign and local laypeople from many parishes... At the end of the procession, Mgr Pierbattista Pizzaballa, Latin Patriarch of Jerusalem, surrounded by Mgr William Shomali, Patriarchal Vicar for Jerusalem and Palestine, and Mgr Marcuzzo, Bishop Emeritus, as well as Fr. Rafic Nahra, newly appointed Bishop and Patriarchal Vicar for Israel, Fr. Piotr Zelasko, Patriarchal Vicar for the Hebrew-speaking Catholics, Fr. Nikodemus Schnabel, OSB and Patriarchal Vicar for Migrants and Asylum Seekers, and Fr. Francesco Patton, Custos of the Holy Land, closed the walk.

After a long descent down the Mount of Olives and a triumphal entry through the Lions' Gate into the Church of St. Anne of Jerusalem, Mgr Pizzaballa gave a speech to conclude the procession. Thanking the pilgrims for their presence, he also strongly reaffirmed the love of Christians for the city of Jerusalem and all its inhabitants, and addressed a prayer for peace throughout the world and especially in war-torn Ukraine.

"Jerusalem must become a place of healing for all nations, the place where all pray and praise the Lord for the wonders he has done here. And from here we will pray and work so that from here, from the place that has known the salvation of the world, a sincere desire for peace may arise for all!" concluded the Patriarch to the cheers of the crowd.

At the end of the day, the scouts got the opportunity to shine, marching through the streets of Jerusalem from Lion's Gate to New Gate. Under the echoes of bagpipes and drums, the inhabitants of the city were able to admire their parade all evening. A beautiful conclusion to this Palm Sunday 2022, which saw blowing on Jerusalem a wind of festival and joy!