Speaking of religions, peace and hope in a divided world 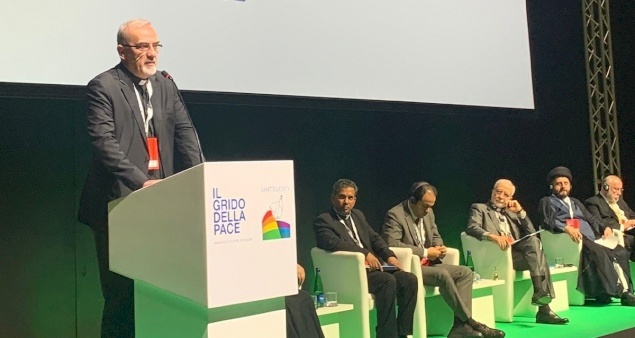 Speaking of religions, peace and hope in a divided world Available in the following languages:

ROME – This week, after conferences in Spain and in Lublin, His Beatitude Pierbattista Pizzaballa participated in the 36th International Meeting for Peace in Rome, entitled “The Cry For Peace: Religions and Cultures in Dialogue” and organized by the lay Catholic association of Sant’Egidio.

The initiative of such a meeting was in born in 1986, after an ecumenical gathering for peace in Assisi, attended notably by Saint Pope John Paul II. Since then, many religious and political leaders contributed to it, offering, through their speeches and conferences, "a message of hope for the future in the name of the greatest good, which that of Peace." This year, the event, which took place in Rome in the convention center La Nuvola, and which was attended by religious figures from Christianity, Judaism, Islam, Buddhism, Hinduism and Sikhism, was divided into several forums of discussion, each based on a specific theme. Forum 8 - entitled Religions, Dialogue and Peace - saw, alongside various other religious leaders from all over the world, the intervention of Patriarch Pizzaballa, who also participated in similar meetings in Cyprus in 2008, Sarajevo in 2012, and Italy in 2015.

"In the Middle East, and particularly in the Holy Land, religion has taken on a very intrusive institutional structure, as it penetrates the ordinary life of the different communities that make up our society," he said. "It determines not only the boundary between communities, but also the civic life within each of them; it is often decisive in political choices and more generally in the governmental political life. [...] "However, my experience tells me a future built on our desire for peace is still possible," he added. "We should not expect it from the big ones, but from the little ones of the gospel, that tell us that the faith still today can generate life, and desire for peace."

Focusing on the role religions played both in wars and in peace initiatives, this forum took place one day before the closing ceremony the afternoon of October 25th, at the Colosseum in Rome - in the presence, for the third consecutive year, of His Holiness Pope Francis, who presided the final prayer for peace. 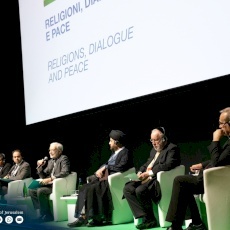 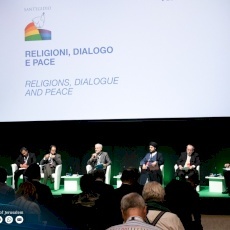