JERUSALEM – On Thursday, December 14, 2017, H.E. Archbishop Leopoldo Girelli, Apostolic Delegate for Jerusalem and Palestine and Apostolic Nunico to Israel and Cyprus, made his solemn entry into the Basilica of the Holy Sepulcher and presented his Letters of Credence to the Assembly of the Catholic Ordinaries of the Holy Land.

It was at Jaffa Gate where the various bishops, priests, religious men and women, General Consuls and the faithful welcomed Archbishop Leopoldo Girelli, the new Pontifical representative to the Holy Land. After some brief greetings, the procession towards the Holy Sepulcher started with rhythmic tapping of the Kawas’ staffs. Surrounded by the different Heads of Churches, the Nuncio greeted the crowd and made his way in the streets of the Old City preceded by Latin Patriarchate and Franciscan priests and seminarians.

Once in the Holy Sepulcher and in front of the Stone of Anointment, the Custos of the Holy Land Fr. Francesco Patton welcomed the Nuncio to Jerusalem, the “heart of the Holy Land” that is loved by all people of different faiths.

In his speech, the Custos invoked “wisdom and prudence” for Archbishop Girelli in his diplomatic service in the Holy Land; two qualities that are needed to lead to an “encounter between peoples and nations”.

Archbishop Pierbattista Pizzaballa, Apostolic Administrator of the Latin Patriarchate, on the other hand reflected on the significance of such an entry to the Holy Sepulcher before the assuming of any office. “We come here to make clear to ourselves who we are, said the Archbishop, to see the empty Tomb and to believe, in order to give testimony and proclaim that Jesus is the Lord”. He added, “we come here also to ask the Lord to inspire us and protect our mission and to bring to Him our unresolved demands…especially in these days, when violence and misunderstandings seem to prevail again, where communities and peoples apparently refuse to acknowledge the rights of the other and where the sanctity of the Places of the Scriptures become source of division and not places of prayer for all the peoples.”

The Nuncio then, standing before the renovated Edicule, thanked the bishops, vicars, the different Christian communities, the General Consuls and everyone who attended the ceremony. He also expressed his warm sentiments to the “brothers and sisters of Muslim and Jewish faiths in the Holy Land, wishing for and with them an increase of mutual understanding, dialogue and fraternity”. The ceremony concluded with presentation of the Letters of Credentials to Archbishop George Bac’ouni, the co-president of Assembly of the Catholic Ordinaries of the Holy Land.

On November 29, Archbishop Girelli, alongside four other newly appointed Ambassadors to Israel, presented their Letters of Credence to Israeli president Reuven Rivilin. The ceremony was an opportunity for the new Nuncio to convey Pope Francis’ blessings and emphasis on dialogue, tolerance and mutual understanding. 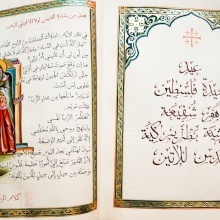