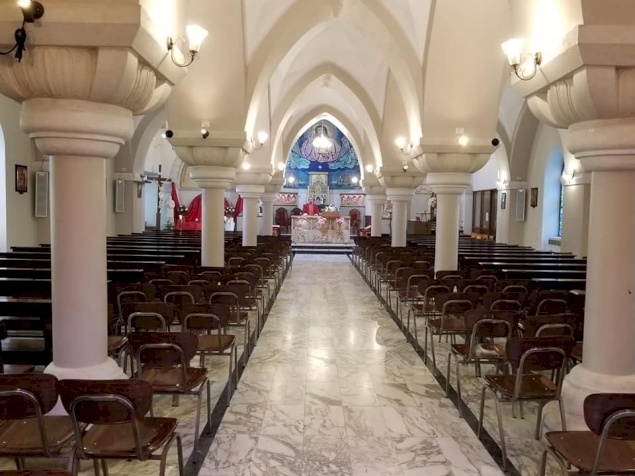 BEIT SAHOUR - "When we Christians in the Holy Land heard about the spread of Coronavirus in China, we could never have imagined that it would arrive here," begins Fr. Issa Hijazeen, who has been the parish priest of the Latin church of Beit Sahour (Field of the Shepherds) "Our Lady of Fatima" for less than a year.

“The story began on March 5, 2020 in Beit Jala, a village very close to ours, where four hotel workers tested positive for the virus. The news shocked us, especially in Beit Sahour, because two students from our parish school belong to the family of the infected people," says the parish priest. Fear spread among students and teachers but, thanks to the rapid measures taken, the crisis was contained and the school closed without further cases or episodes.

Similar to other regions of the world, the measures taken to stem the infections have been progressive. Fr. Issa recounts: “On 5 March a state of emergency was declared for the whole region of Bethlehem, and two weeks later for all of Palestine. The Catholic Church responded to the emergency and took the necessary measures: Archbishop Pierbattista Pizzaballa announced the instructions for the celebration of the Divine Liturgy, first for the Bethlehem region, and then for the whole diocese of the Latin Patriarchate, asking that the Divine Liturgy be broadcast on TV and on social media. In addition, he also asked to encourage people to read Holy Scripture gathered with their family and to pray the Rosary. The Archbishop has left each parish the freedom to find their own ways to implement the instructions. The priests, in all the parishes, interacted quickly and positively with the Archbishop's instructions."

The same was done in "Our Lady of Fatima" parish in Beit Sahour. Fr. Issa got in touch with the parishioners sending them invitations to pray together at specific times for all of those ill with the virus worldwide, in particular by responding to Pope Francis' requests, in strong solidarity with the Universal Church. With a small group of faithful, a novena to Palestinian saint Marie Alfonsine, the founder of the Congregation of the Sisters of the Rosary was organized. In addition, every Saturday Fr. Issa shared a spiritual reflection on the Sunday Gospel for parishioners. For young people and children, an activity was proposed every day through the Facebook page.

"Although our community has tried to follow the Holy Mass ‘by electronic means’, I have to say the truth: it is not enough", says the pastor after a few weeks of this quarantine. "Many have called me to express their distress at not being able to participate in the Mass and especially in the Body and Blood of the Lord".

During Holy Week, Msgr. Pizzaballa asked to transmit the celebrations from the Co-Cathedral of the Patriarchate everywhere, thus promoting a strong sense of communion between Christians in the various areas and parishes. Fr. Issa recounts how he accompanied the faithful in those days: "In our parish in Beit Sahour, in agreement with the civil authority, I was able to bring Communion to the faithful in their homes during Holy Week. I called each family over the phone to find out if they wished to receive Communion in conjunction with the celebrations broadcast at the Co-Cathedral. Most of the families (around 250) were able to receive Communion during those four days".

At the end of April, the tension began to ease and now - following the indications of the Apostolic Administrator - it is possible to celebrate mass outdoors, bring communion home to those who cannot go out, administer the sacrament of Reconciliation keeping due distances and with due precautions.

The creativity of priests and communities remains a fundamental resource and Fr. Issa shares what has been done in his parish: “I have adopted a method to prevent many people from coming together; those who want to attend Mass call me first by phone and are assigned a specific day and time."

Furthermore, in Beit Sahour, extended Christian families often live close together as one family, around the same square. The parish priest is, therefore, organizing to carry out "pastoral and spiritual actions with each group of families. I am preparing to celebrate Mass for each group out in the square and pray the Rosary together during the month of May”.

Fr. Issa concludes with a request that we certainly all can grant: “In the meantime, pray for us; we too will continue to pray for you from the Holy Land.