Breathing form and color to the Word of God: the gift of the Patriarch to the Mother Church of Jerusalem 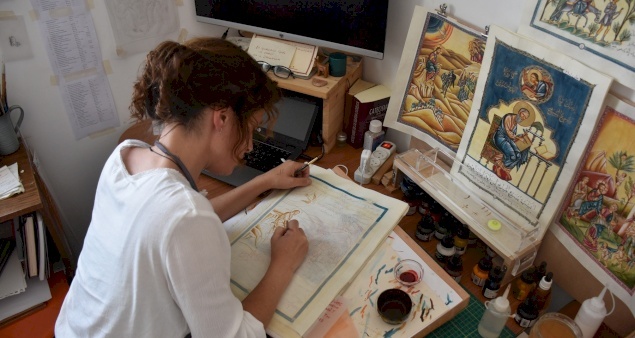 Breathing form and color to the Word of God: the gift of the Patriarch to the Mother Church of Jerusalem Available in the following languages:

JERUSALEM – Behind a wall of ochre stones, in a small workshop hidden inside a residential building, Sr. Maria Ruiz, from the community of the Sisters of Bethlehem, has been working since the end of 2020 on the illustrations of a new Evangeliary, meant for the Mother Church of Jerusalem and entirely done by hand.

A crazy project. Such is what one might think when hearing about the undertaking of His Beatitude Mgr Pierbattista Pizzaballa, Latin Patriarch of Jerusalem – an undertaking that has now been going on for three years.

Everything began in 2019, when Fr. Firas Abedrabbo, then secretary to the Patriarch, spotted an evangeliary of the Sisters during a visit to Deir Rafat, where the community has been living since 2009. Shortly thereafter, some of the community members are invited to the Latin Patriarchate for a meeting with Mgr Pizzaballa, who tell them of his idea: to offer the Mother Church of Jerusalem an Evangeliary entirely done by hand.

"When we told him that we were ready to do it, we hadn’t fully realized what it really meant," explains Sister Maria, in charge of the illustrations. Trained as an iconographer, she came to the Holy Land four years ago, after having spent more than fifteen years in Spain and a brief stay in Portugal. Today, she devotes most of her time to breathing form and color into this Evangeliary imagined by the Patriarch. "Iconography has become the fabric of my prayer," she reveals. For a time, she also worked on the new Arabic-language Missal, which should be printed in December 2022.

"This was not originally planned," she says. "It was Fr. Firas [Abedrabbo] who came up with the idea of having us work in parallel on this other project, when we had just signed an agreement with the Latin Patriarchate regarding the Evangeliary."

The realization of these ambitions is no easy task. After the first meeting between the Sisters of Bethlehem and the Patriarch in 2019, a year of reflection passes before the project really takes shape, in late 2020. However, by that time, Mgr Pizzaballa's term as Apostolic Administrator is about to come to an end. What will happen to the project if he has to leave the Latin Patriarchate? The Sisters worry. But the one who will soon become Patriarch reassures them. There is no question of abandoning the project, no matter what happens. He will personally see to its completion... and, once the project is finished, will offer it to the Holy Land. 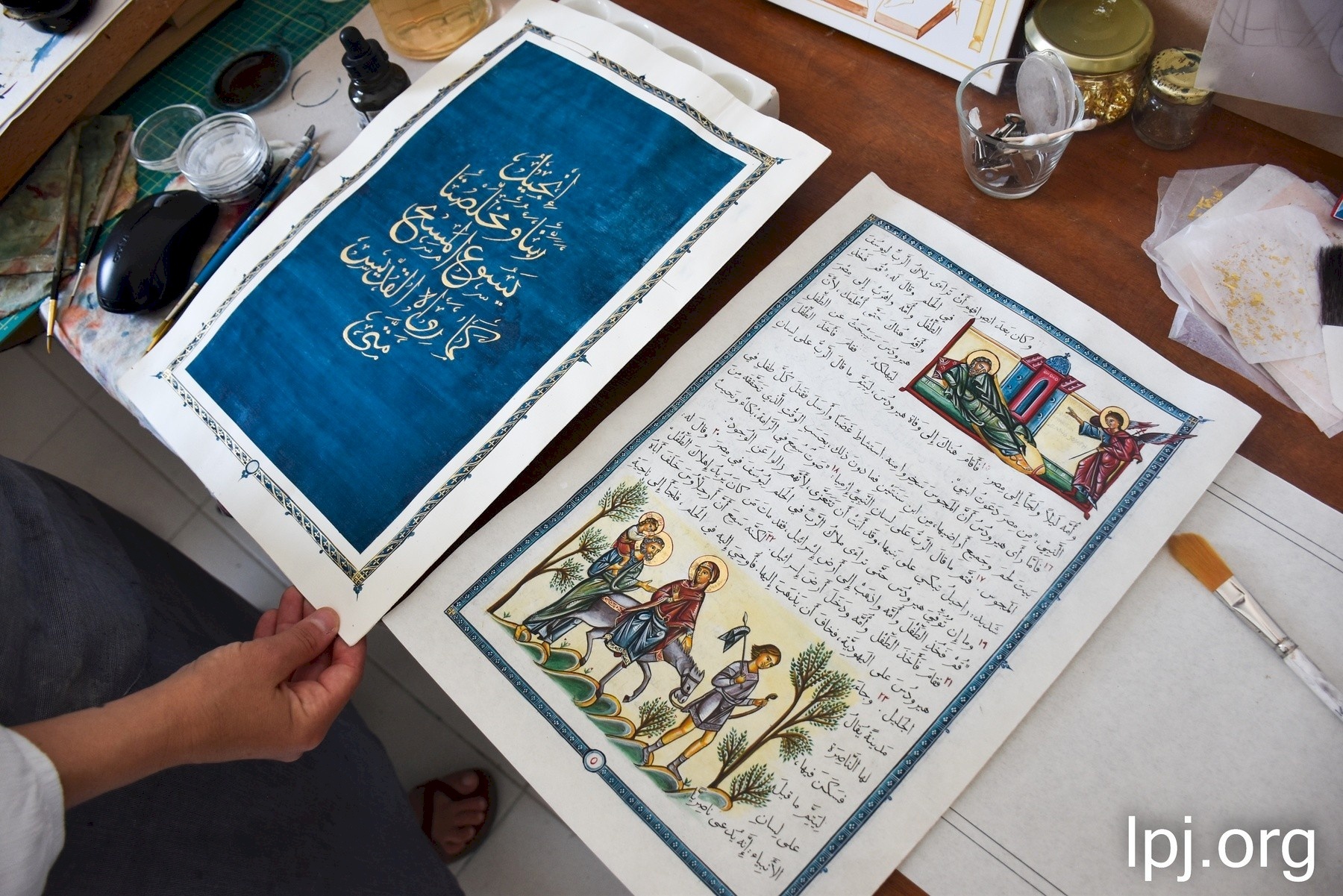 First sketches of the project...

On his return from Rome in November 2020, the Sisters thus present the Patriarch with the early stages of the future Evangeliary; artistic style, calligraphy, color palette... Their first inspiration came from the Psalter of Queen Melisende, a 12th century manuscript created in the Scriptorium of the Holy Sepulchre, which combines Byzantine and Western Latin arts in its illuminations. The new Patriarch's instructions are clear: he wants a work that is original but emblematic of all the influences – Byzantine, Latin, Armenian... – of the Mother Church. The objective? To put the Word of God back at the heart of the Church, which saw the Word become flesh. By offering it a manuscript worthy of its origins and the richness of its history. 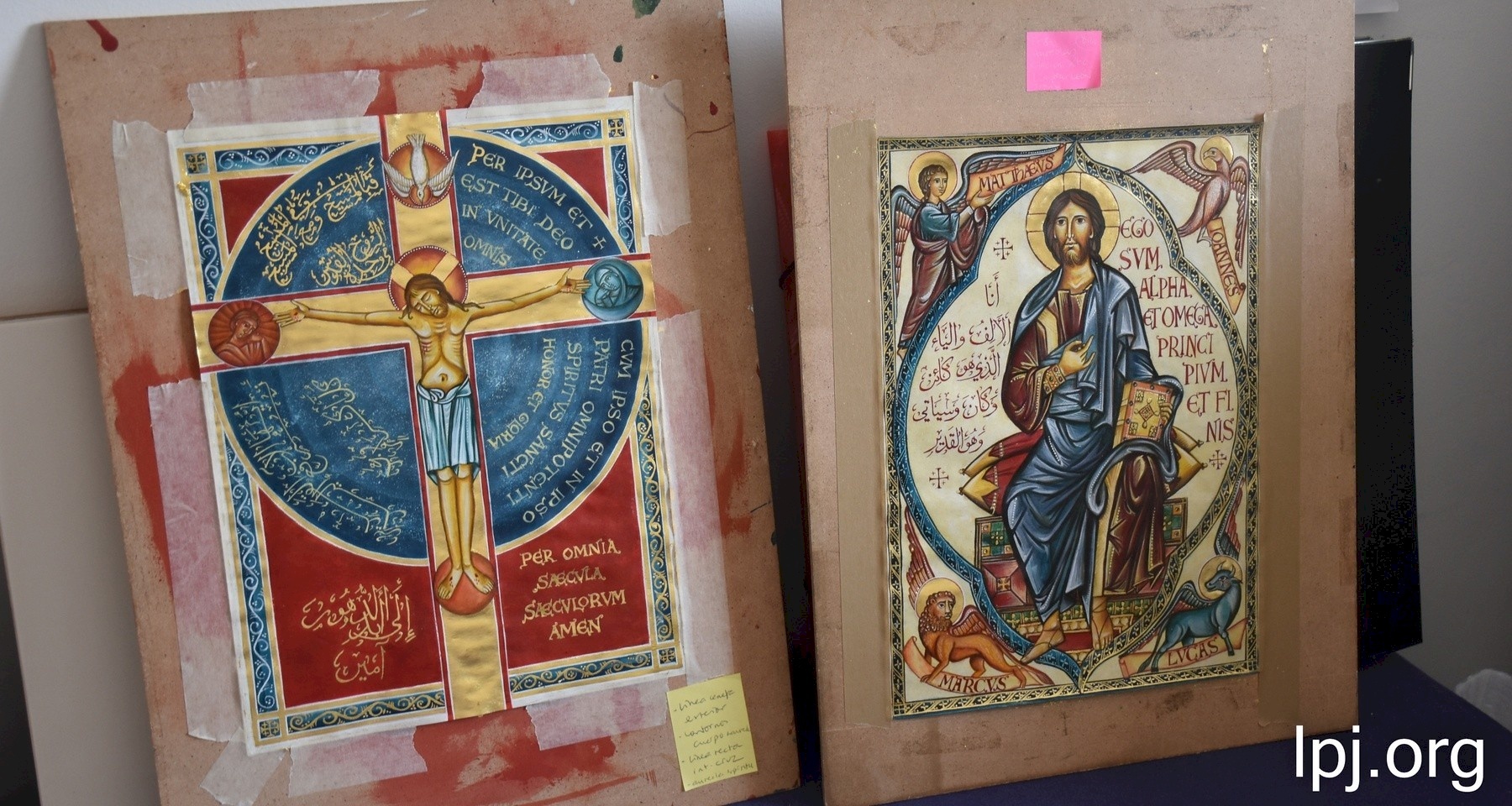 Other examples of Sister Maria's work.

In December 2020, the project really begins. The community gets organized; Sister Maria will work in Jerusalem, while Sister Anélia – trained in calligraphy, passionate about Arabic writing and in the Holy Land for more than fifteen years – will remain in Deir Rafat. If they are the only two nuns directly involved in the project, all the Sisters carry it in their prayer, which they perceive as a mission for their Church. 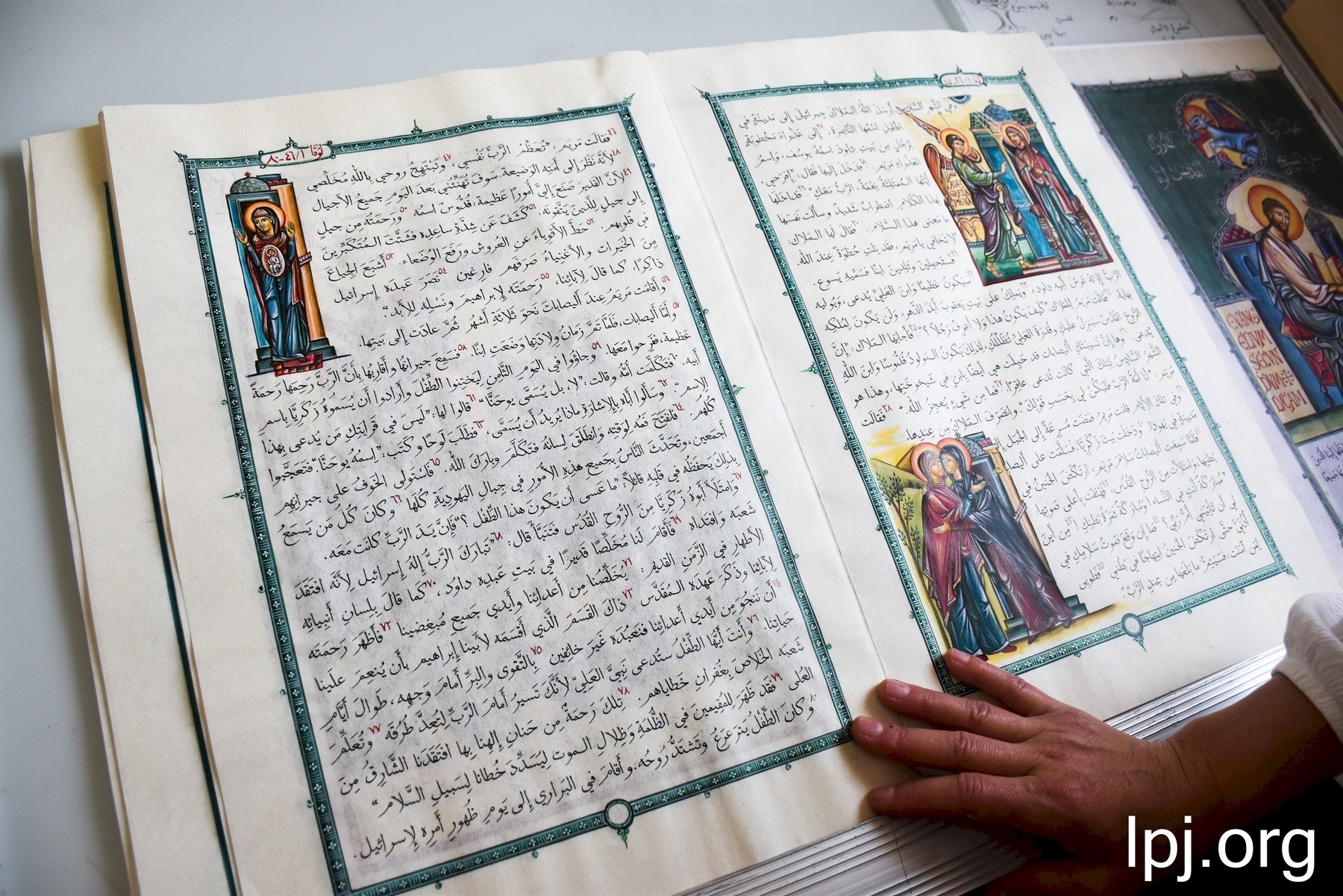 Some of the first pages of the Evangeliary, which will not be used in the final version. During a visit to Cyprus, the Patriarch discovered the existence of another Orthodox Evangeliary, recently done by hand by a monk. The abundance of illustrations convinced him to revise the project and have it more richly illuminated.

"Working on this project while living in Jerusalem has been a huge help for me, because there most of the Holy Places are accessible; I can visit them to pray whenever I want, to find inspiration," tells Sr. Maria. "It's by being in these places that I can touch the reality of the passages of the Gospel I have to illustrate."

In March 2021, only a few months after the project started, she was asked to work on the Missal. "At that time, we had just begun the Evangeliary; only a few images, mainly from the Gospel of Luke, were finalized." 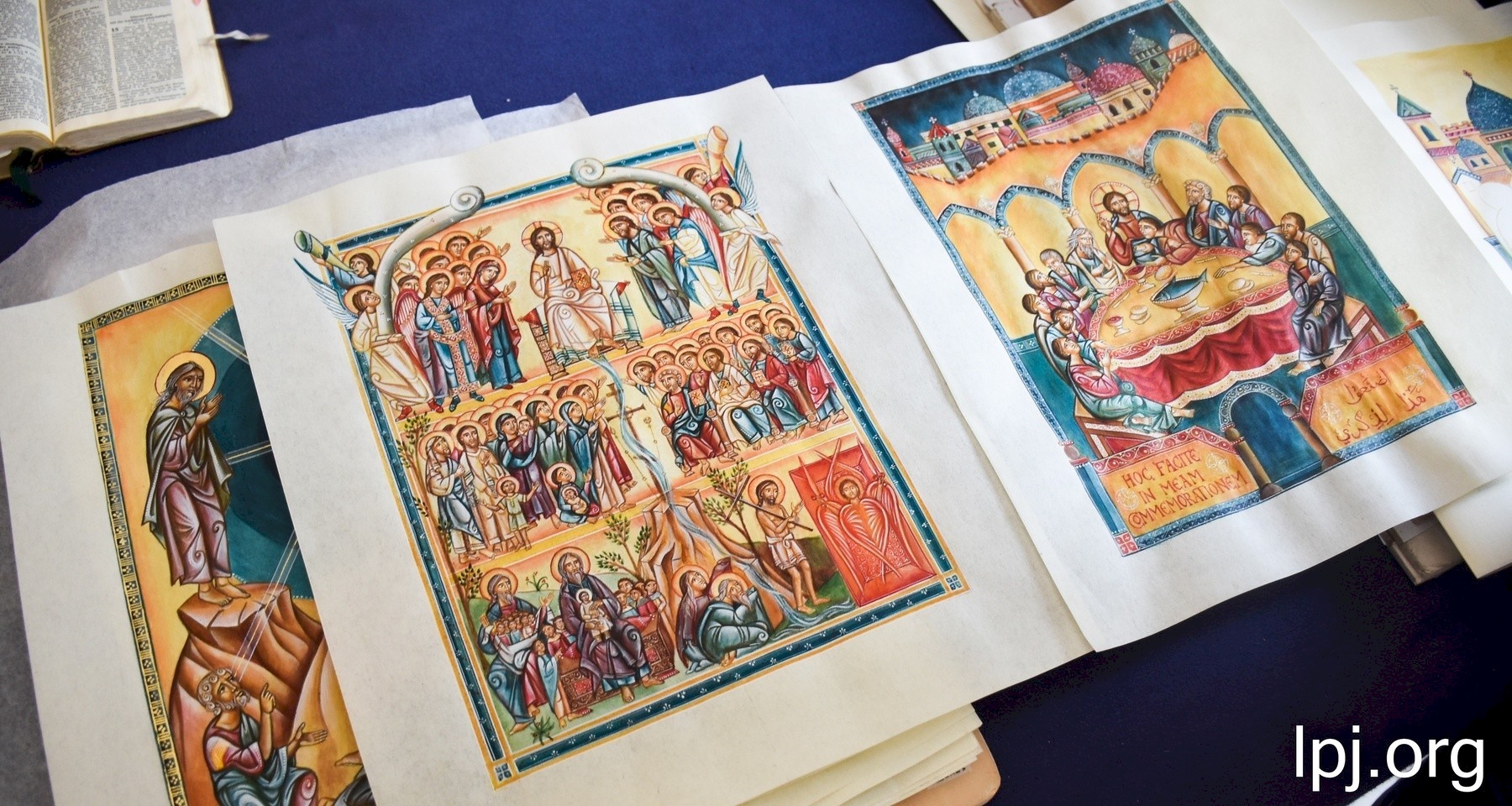 Illustrations for the Missal.

Initially, this Missal, whose update has been ongoing for several years now (the last edition dating back to more than fifty years ago), was composed of religious illustrations drawn from various influences and artistic currents, with no real unity between them. Now illuminated in the same style as the new Evangeliary, it should be released in December, in all Arabic-speaking Latin parishes. "I'm still working on some finishing touches and overseeing the printing process of the images, because we want to make sure that the final rendering is up to par," says Sister Maria. "But other than that, my work today is all about the Evangeliary." 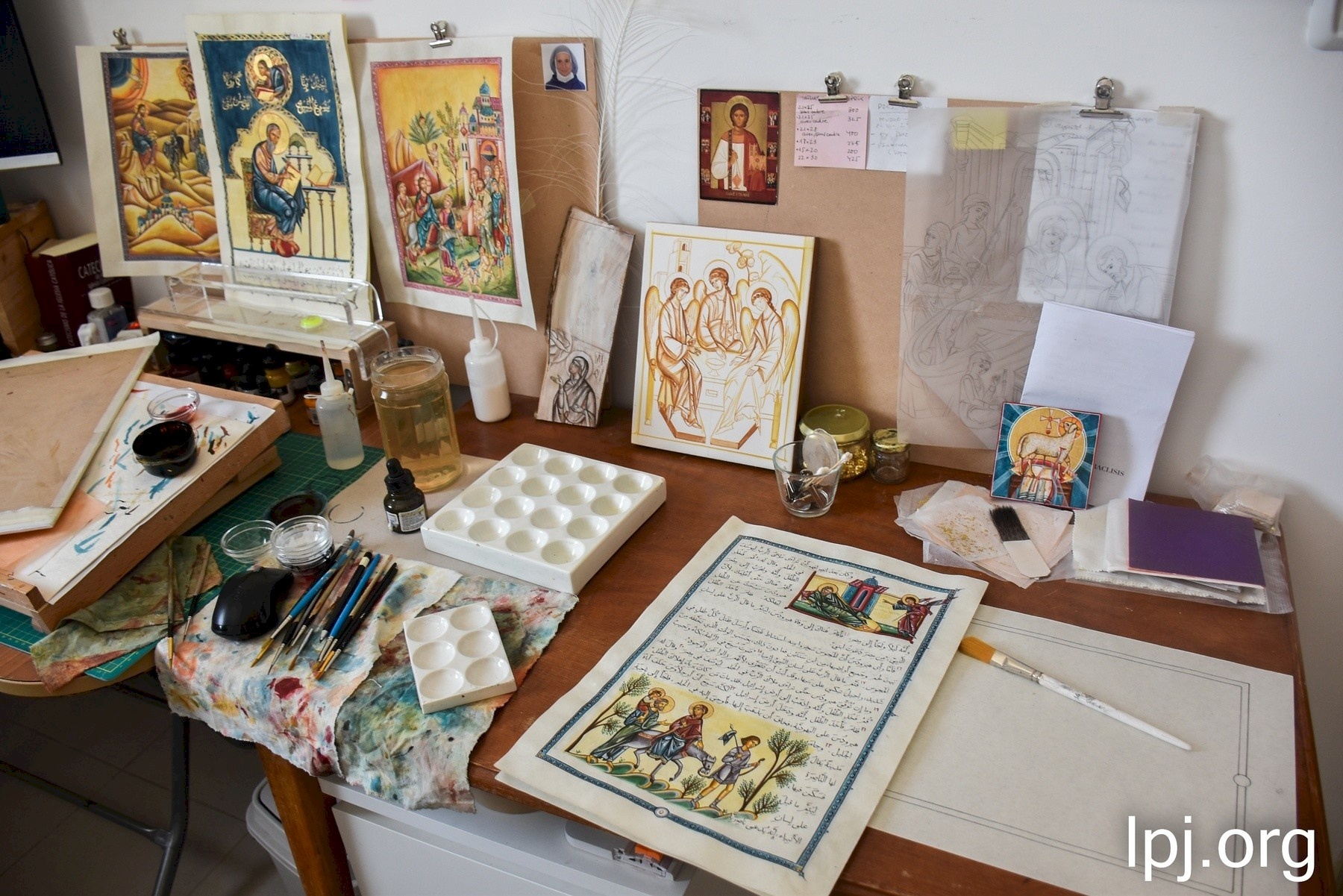 In the workshop of Sr. Maria…

Every day, Sr. Maria spends hours drawing, inking, and gilding these pages so dear to her and to her Patriarch. The various stages of her work are carried out in tandem with Sr. Anélia, but also with Mounir, in charge of the Latin Patriarchate's printing press. "Finding the right way to work together took us some time,” Sr Maria explains. "The first stage is the layout: on my computer, I place the text, making sure the font size and line spacing match Sr. Anelia's calligraphy, then I plan the space for the images, based on what we decided with the Patriarch (which paragraphs will be illustrated). Then I go to in Beit Jala to get this layout printed, in the Patriarchate's printing press – where we often make further adjustments to the layout of the pages – before sending it to Sr. Anélia, who will use this first step to write the page in pencil." 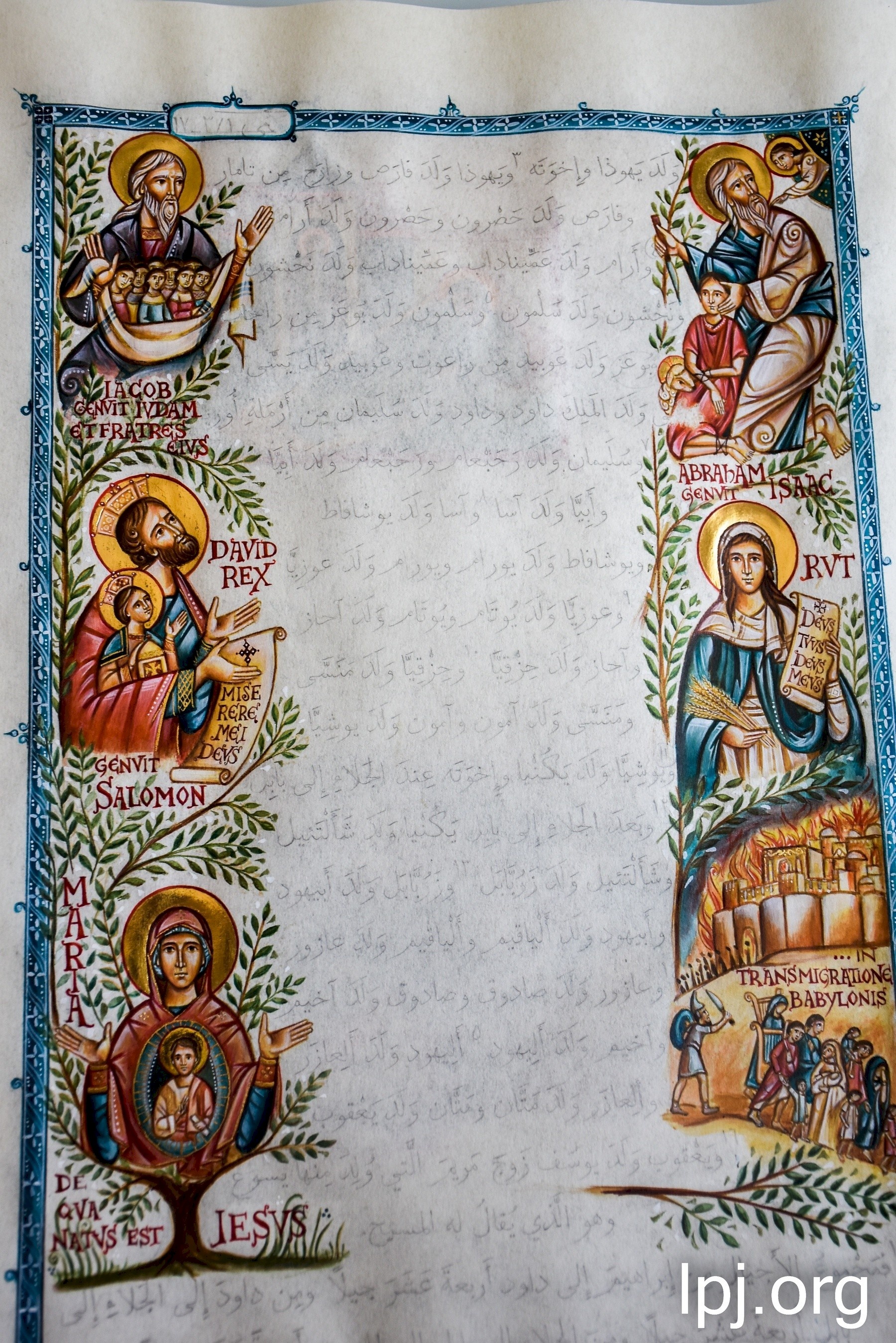 A page of the Evangeliary, not yet inked.

Sr. Maria then completes the page with her illustrations, which are scanned in high resolution before being passed on to Sr. Anélia, so that the latter can finalize everything by calligraphing the text in ink. "What we haven't quite figured out yet is when to put the gold. In the past, I would put the paint on first and then, once the page was finalized by Sr. Anélia, I would do the gilding over it. But the quality is not ideal. The best thing would be to gild just after the design is finalized, but I fear that it will be damaged in the various journeys that the page will make between Deir Rafat, Beit Jala and Jerusalem.”

The last step involves the application of a suitable fixative, which protects the page from the weather and time. All the finished pages are currently kept in Sr. Maria's studio, which allows her to maintain a certain consistency of style between her illustrations, especially those of the biblical characters. 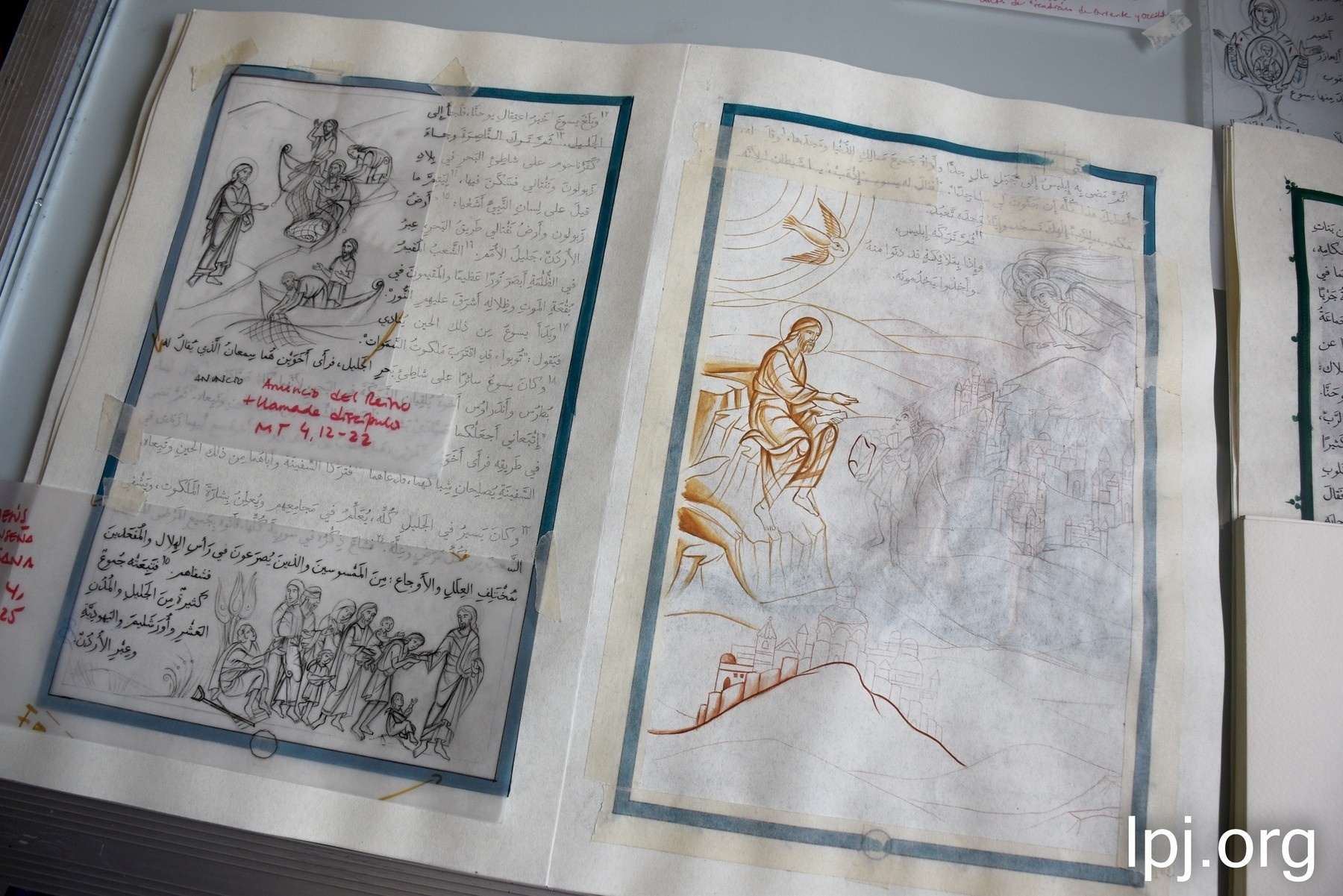 A page in development: inked layers on the left, sepia drawing on the right. These two stages of the drawing – which come after a first pencil sketch – are photographed by Sr. Maria to be transmitted to Patriarch Pizzaballa, to give him the possibility of proposing modifications. Sr. Maria also takes the time to listen to feedback from the Sisters of her community and other experts: "Having outside eyes for this kind of work is extremely valuable.”

Once finished, the Evangeliary will be distributed to all Latin Catholic parishes in the Diocese of Jerusalem, as well as to the Holy Sepulchre. The original copy is destined for the Co-Cathedral of the Latin Patriarchate. "But to be used, not to be exhibited," clarifies Sr. Maria. "It is not a work of art; it is a work that was designed by the Patriarch, for the Liturgy and prayer of the living stones of Jerusalem." 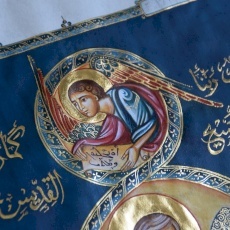 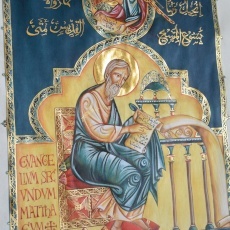 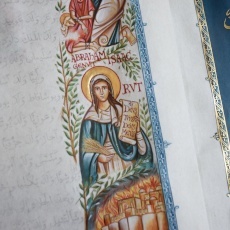 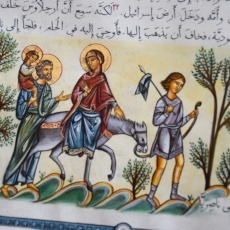 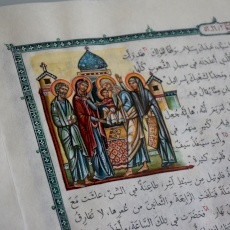 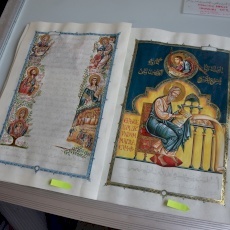 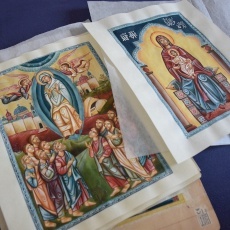 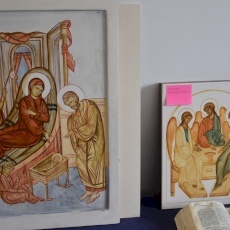 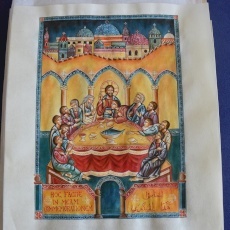 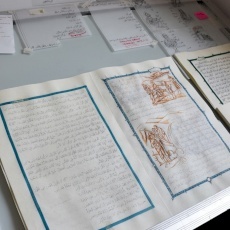 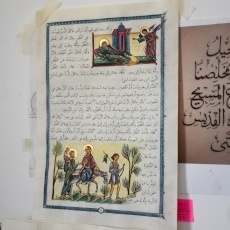 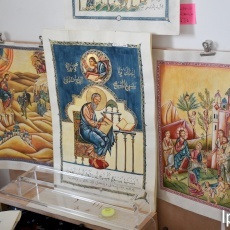 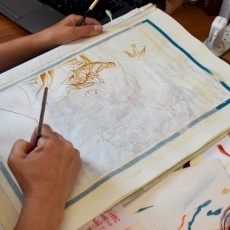