“Consecrate yourselves, for tomorrow the Lord will do wonders among you” 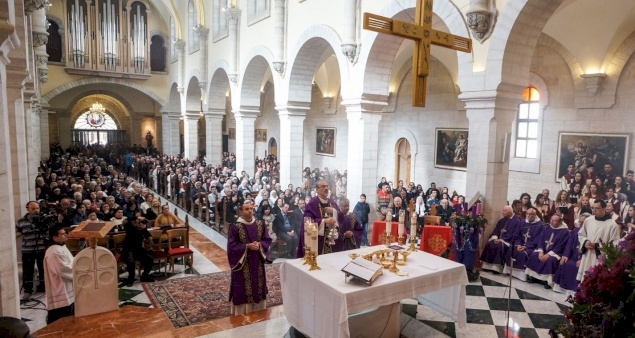 “Consecrate yourselves, for tomorrow the Lord will do wonders among you” Available in the following languages:

HOLY LAND – All over the world, people choose to dedicate their lives to God and the Church. Whether there are men or women, and although they are not religious, these people live together, make vows, and stand at the service of their community, no matter the constraints. Their objective? To serve the people and to serve their Church.

All kinds of people dedicate their lives to the Church. Yet when one thinks about it, it is more often than not priests, monks and sisters who come to mind. So, what about consecrated people? Who are they? And how did they come to choose this path of life?

“I’m Kathleen Nichols, I’m from the US, Colorado, and I love mountains and hiking. I’ve been part of the community “Consecrated Women of Regnum Christi”, a society of apostolic life whose members take vows of poverty, chastity, obedience, and live in community, for almost thirty years.” 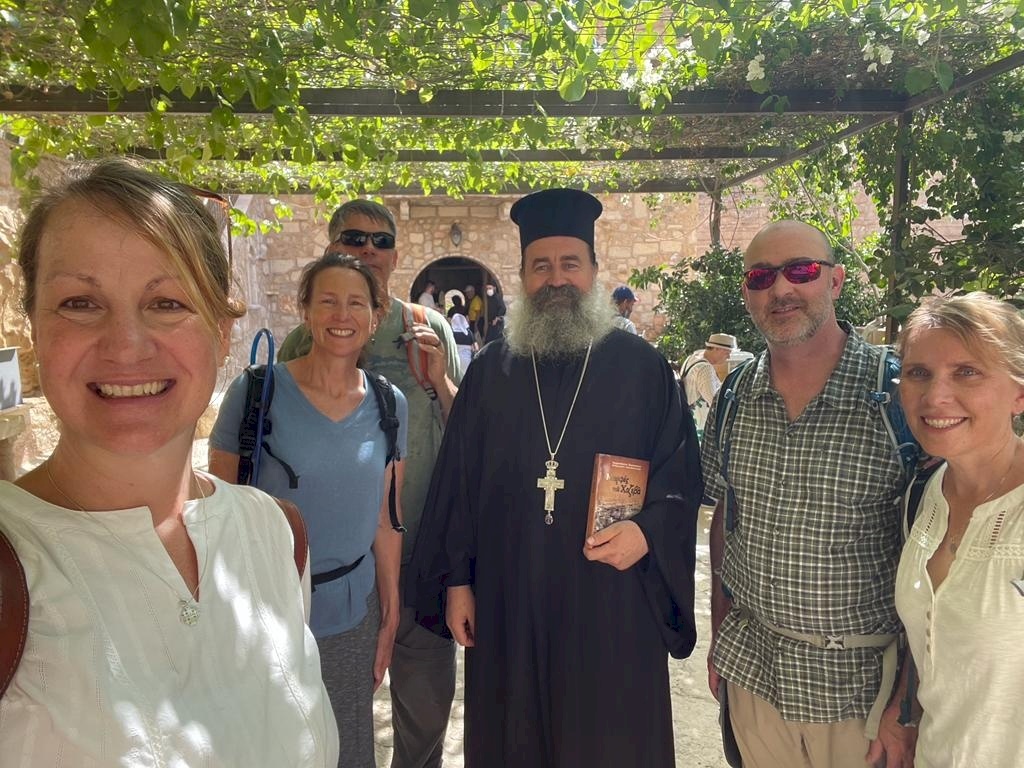 With a mere glance, no one would guess that this bright, lively woman, who has been working with the pilgrims of the Magdala guesthouse and organizing virtual pilgrimages for the past few years, professed vows, lives in community with her fellow sisters in Magdala, and chose to dedicate her life to God “to repay Him for all the love and blessings He has always granted me.” Yet such is her life; a life dedicated to God, the Church, and the members of her community. 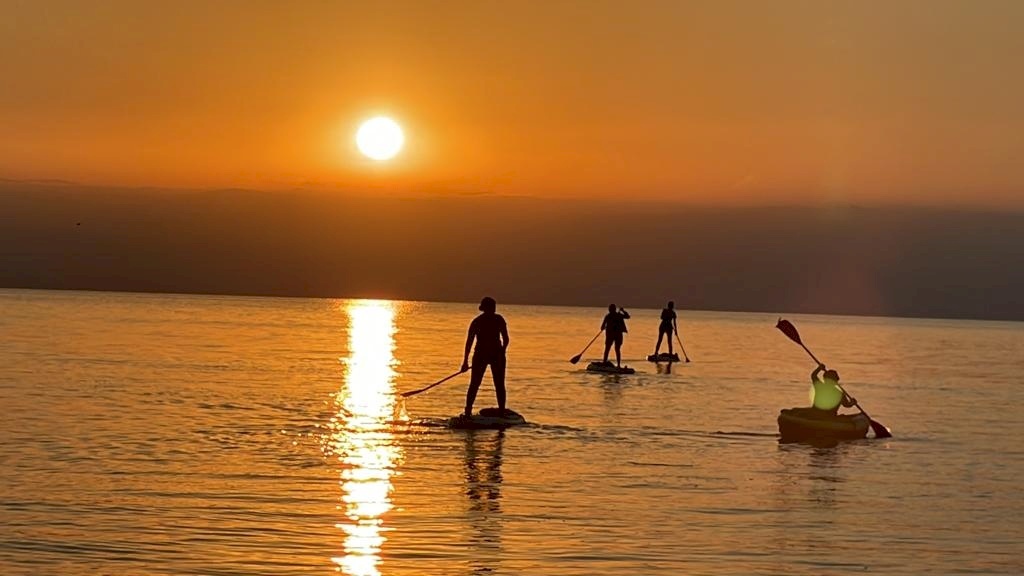 Kathleen’s work with pilgrims leads her to supervise many experiences for pilgrims, including morning paddling on the Sea of Galilee while reflecting on passages of the Gospel.

“If there’s one thing I noticed during my life as a consecrated woman, which led to me travel to many different countries, it is that what speaks to people is beauty and joy. That’s expressed in architecture, in art, in liturgy… It makes people stop and look and gasp and wonder – like a universal language. Here in the Holy Land, it is particularly visible, as people are able to smell and taste and see Christian history. I wish us and the Church to focus more on this, on this “Via Pulchritudinis”, this Way of Beauty, which could unite us in the wonder and joy we feel before God's creation." 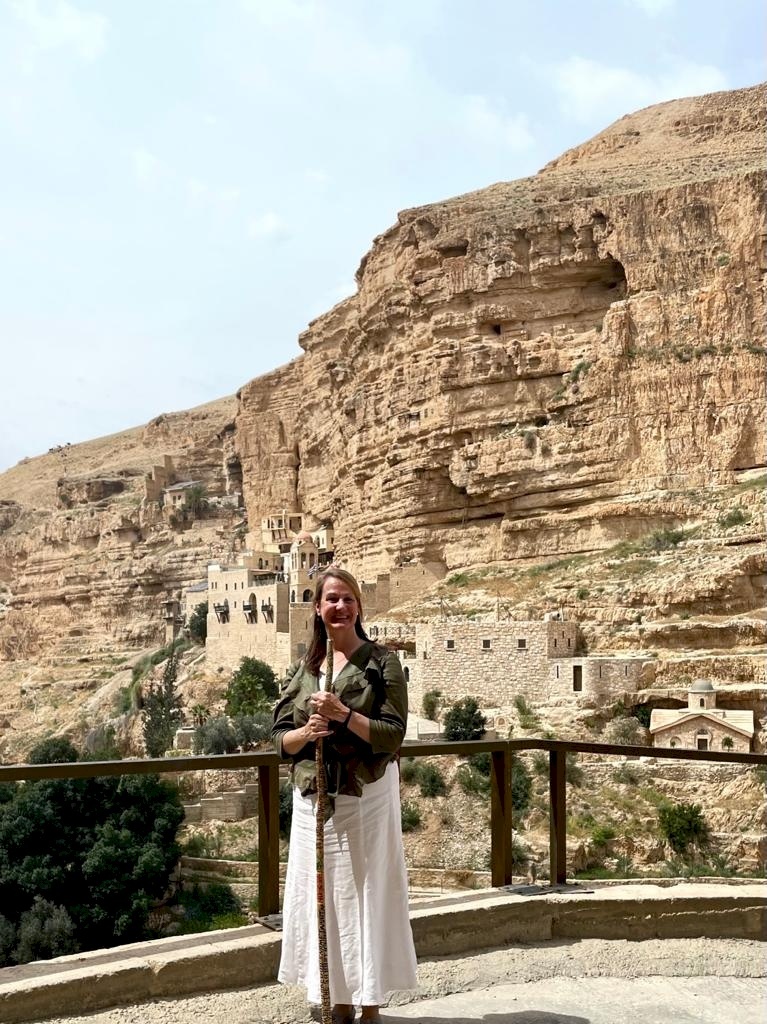 Kathleen filming one of her most recent virtual pilgrimages, focusing on the sacraments, in Wadi Qelt – another vivid example of the Holy Land’s beauty she so dearly cherishes

Beauty and joy are something common to consecrated people, something one experiences deeply when visiting them. In Tiberias, in the community of Koinonia John the Baptist, which was born right after Vatican II, smiles enlighten every face. And when asked about their journey toward consecrated life, the same words come up; “revelation”, “joy”, “grace”. Although sometimes, the path that led them to where they are today was far from easy.

“My name is Cristina. I’m 33 years old and I come from a small village near Venice (Italy). I’ve been a consecrated woman for fifteen years in Koinonia John the Baptist, but before I joined the community and found true light again, I turned away from faith and from the Church.” 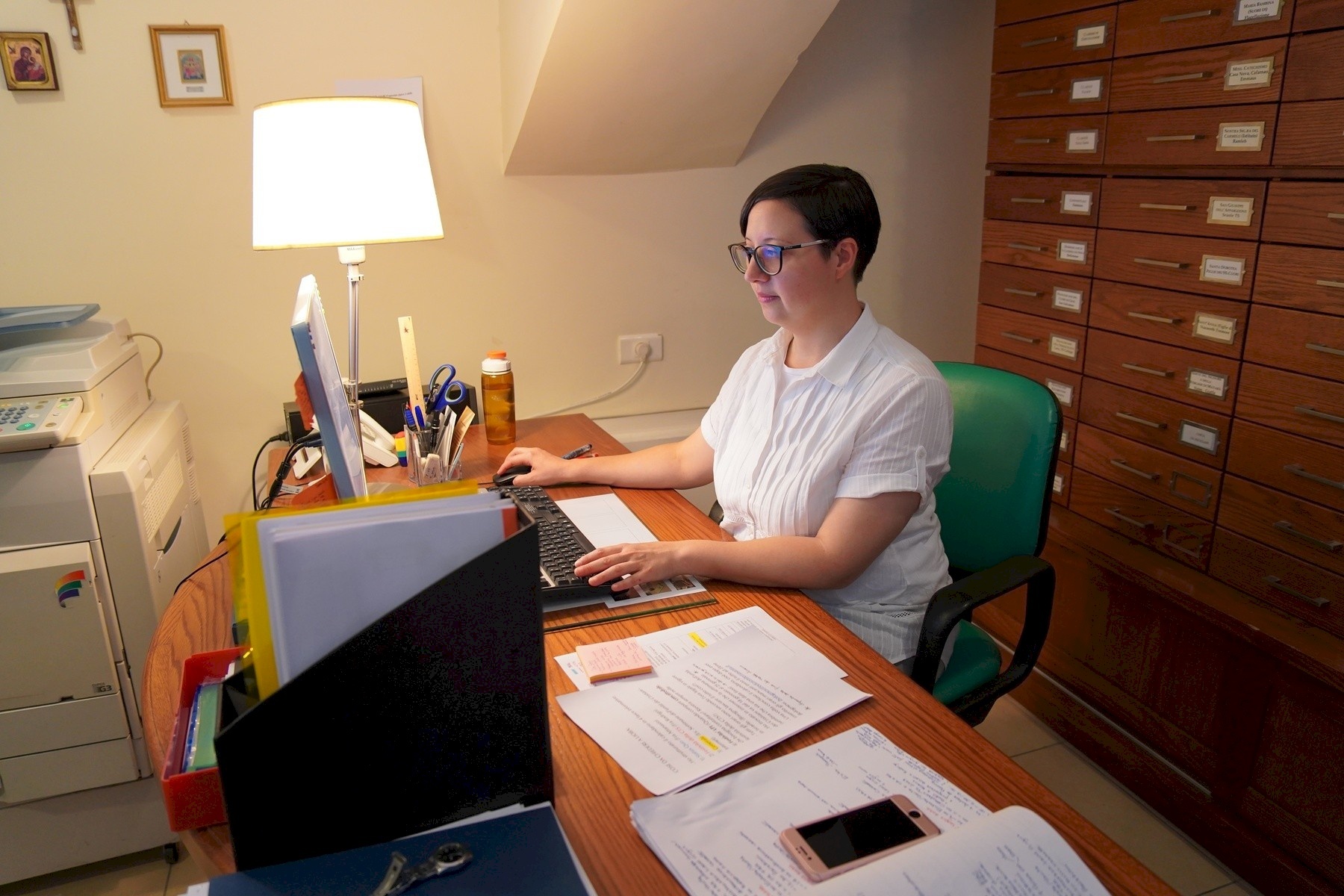 Cristina in the offices of the Custody, in Saint Savior

Today, Cristina lives with her community in Even Sapir, a small village close to Ein Karem. It is hard to believe that this young woman, who quietly radiates faith in Christ, once stood far away from her Lord. “Although I had been raised in a Christian family, I lost my faith in God during my teenage years,” she explains. “I spent time with the wrong people, I did the wrong things just to imitate the others around me and because I did not want to be alone. Yet I was alone. But I only became aware of it when I heard the voice of God again, thanks to what is now my community. When Christ entered my life, it became totally transformed; full, joyful and surrounded by real friends.” 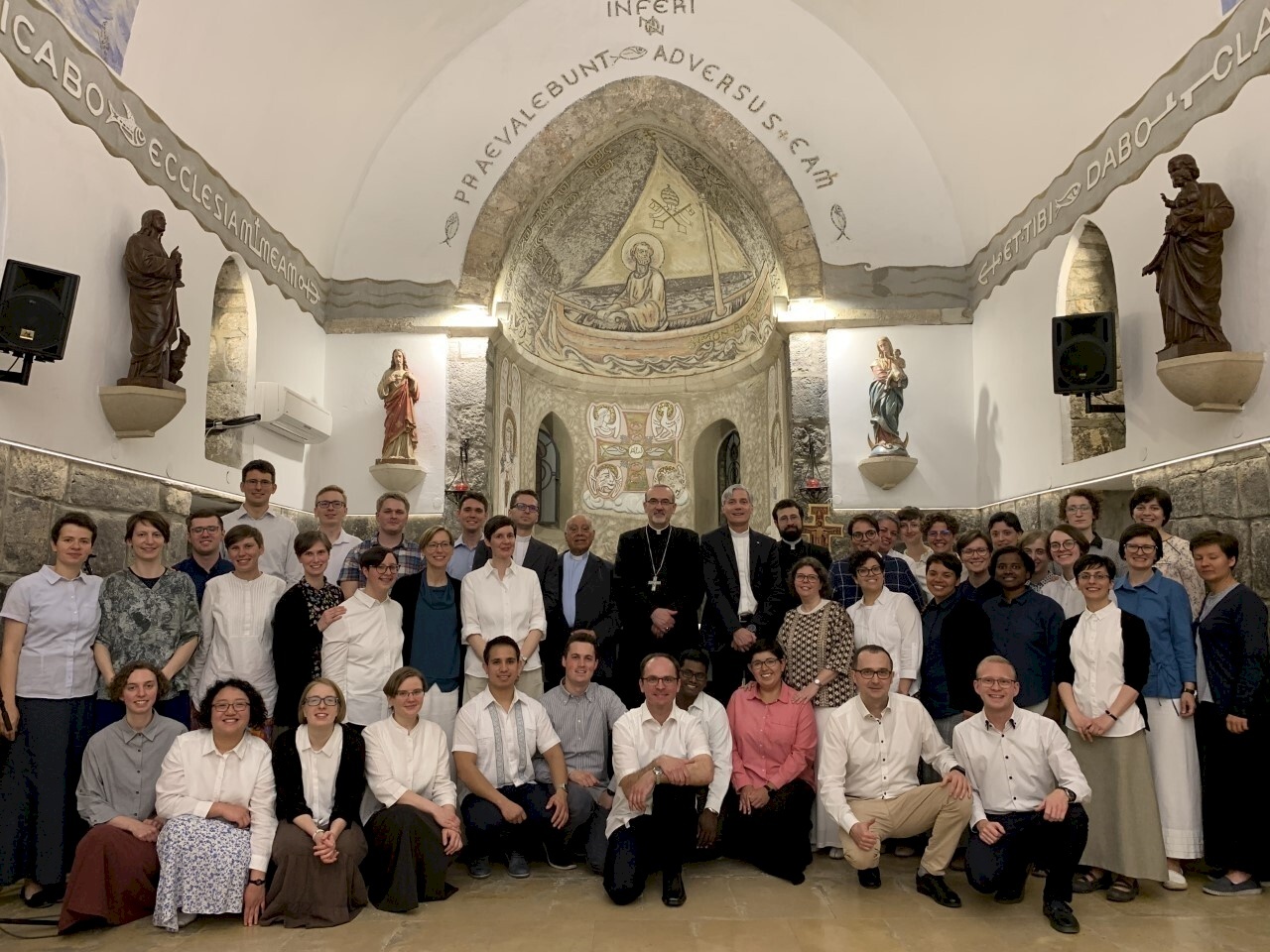 The Koinonia community in Tiberias with His Beatitude Pierbattista Pizzaballa inside St Peter’s Church, in April 2022.

Koinonia John the Baptist, which has two communities in the Holy Land (one close to Jerusalem and the other in Tiberias), but many others around the world, is far from being the only community of consecrated people working and living in the land of Christ. Canção Nova, the Neocatechumenal Way, the Emmanuel, Focolare… the names, charisms, spiritualities and members are numerous and diversified. Yet all strive to put their lives at the service of the Church, of people, and of their community.

“For me, to live in community – which is what attracted me the most when I began to consider consecrated life – is also a call to experience diversity and internationality,” explains Claire. A member of the Chemin Neuf community since 2002, she decided to engage herself as a consecrated woman after various experiences related to her faith and the French charismatic community, born in 1973 at the initiative of a Jesuit priest. “During my last years in Nazareth [before coming to Jerusalem], the members of the community were almost all French. And the experience was not the same; it sometimes pushed us to stay in our comfort zone and not to open ourselves to the world. I also think a real balance between men and women, couples and consecrated is very important. Being confronted daily with the other “state of life” helps us to live our own.”

Today, after spending six years in Lyon working the administration of the community, six years in Madagascar working with the youth (“One of the best experiences of my life”), three years in Jerusalem and then four years in Nazareth, Claire became in charge of the community in Jerusalem, whose members take care of the pilgrim place and archeological site of Ecce Homo with the Sisters of Our Lady of Zion. 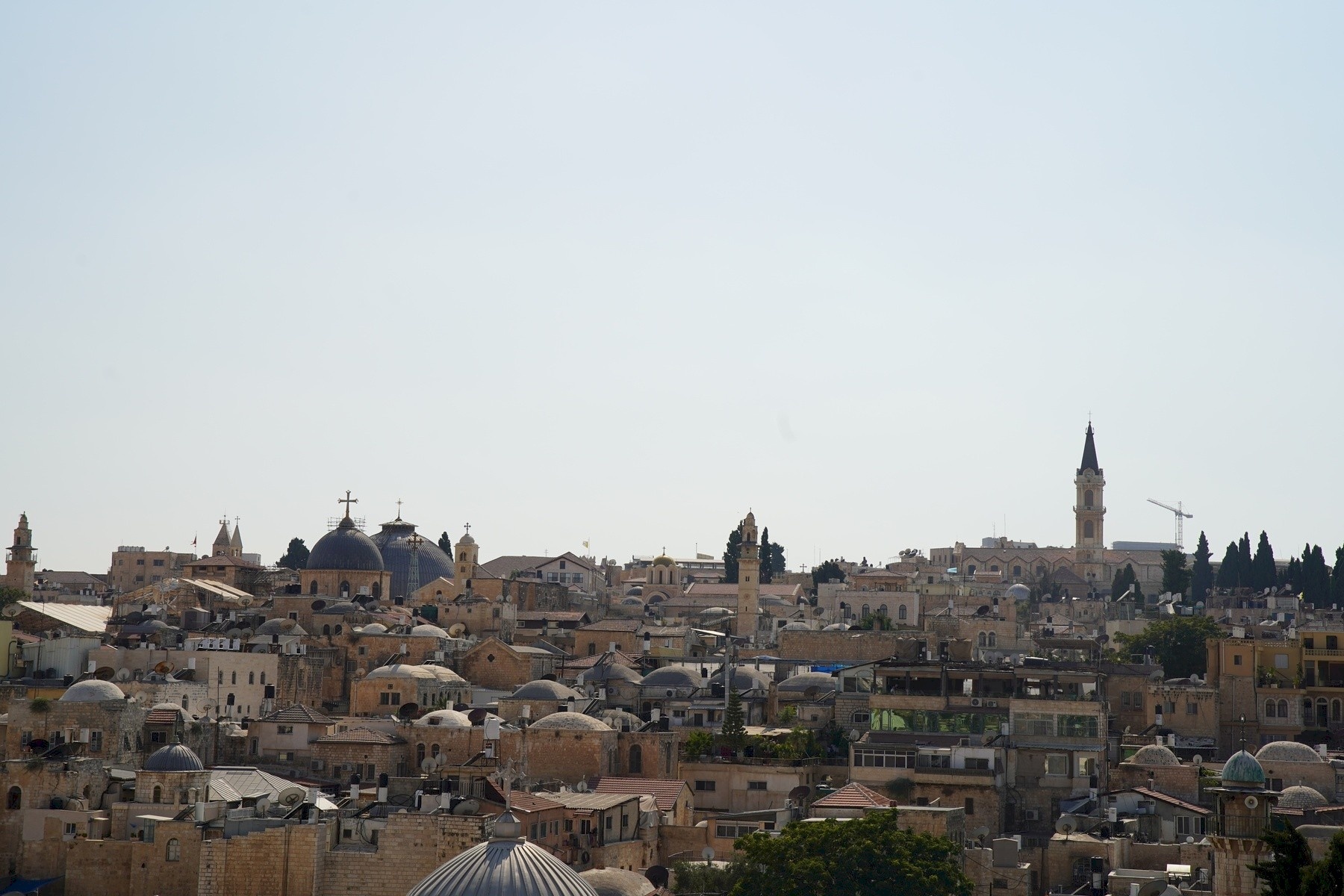 Viewpoint from the rooftop of Ecce Homo

“The community life we experience here is a bit different because the house is open seven days a week, so there’s always at least one of us working. Every day, we share a moment together during Mass in the morning, and during the evening prayer, but during the day it’s more difficult. We eat our lunches with the Sisters and the volunteers, and during dinners, we sometimes wash the dishes, or serve the pilgrims… But we try to share moments only among ourselves a couple of times per week, because it’s also part of who we are and why we embraced consecrated life.” 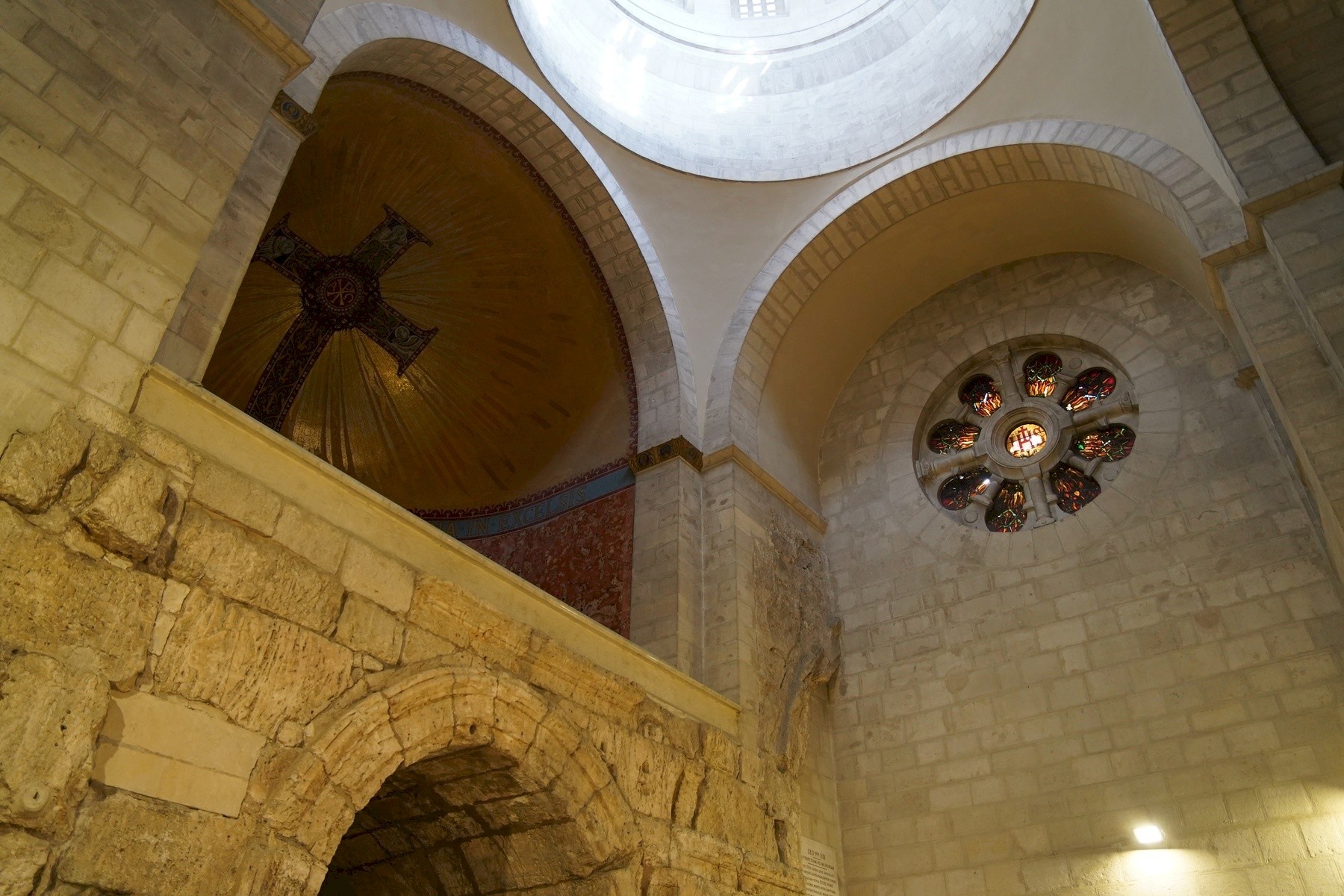 In the church of Ecce Homo, the members of the Chemin Neuf community celebrate Mass every day with the Sisters of Our Lady of Zion.

When asked about her perception of religious life compared to consecrated life, Claire thinks a little bit before answering: “In practice, I think we’re the same. I never thought about joining a religious community instead of Chemin Neuf simply because it was through Chemin Neuf that I found my way to God. But both of us [consecrated and religious] profess vows, we are committed to the same thing, we often have the same questions… We share the same call and the same life in the service of the Lord and of the Church.”

For Paul, who professed his perpetual vows as consecrated member of the Focolare movement in 1992, the choice of consecrated life was not necessarily the most obvious. “I began to think about my vocation when I was 13. But the first thing I asked myself was not about consecrated life or priesthood; it was whether I should live an active or a contemplative life. One of my aunts was a Carmelite, and when I visited her, her way of life struck me as the sort where God is always at your side. Then on the other hand, there was our parish priest, who was with people, so who was not “only” with God, but yet, through his vocation, gave his union to God to others.” 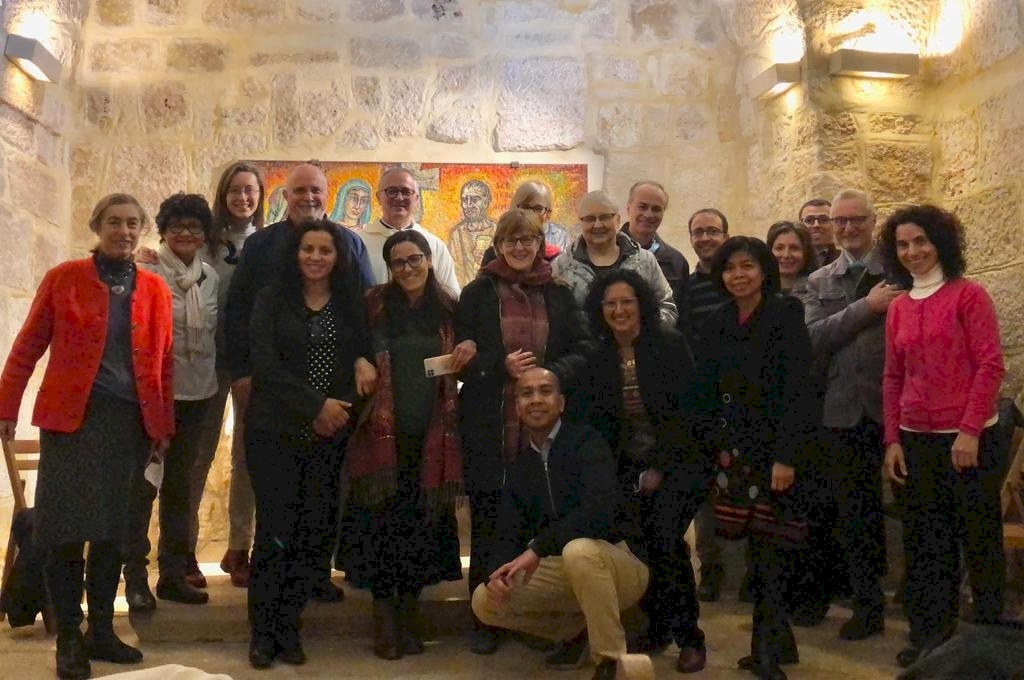 Paul with all of the other Focolare members living in the Holy Land, in the Cave of Saint Jerome in Bethlehem

After this reflection came another: priesthood. “I knew I wanted to live for unity [Focolare’s aim being to spread unity worldwide (cf. Jn17:21)], and to choose Christ on the cross who cries out "My God, my God, why have you forsaken me?" (Mk 15:34), but I didn’t know how. I knew that if I became a priest, chances were that I would also become a very good Pharisee. I would talk, and explain things to people, but I would not experience these very things.” So Paul went on with frequenting the movement’s groups, while also starting to frequent the community of the lay consecrated.

It was in Algeria, during Paul’s military service, that the question of priesthood came up again, when he saw the lack of Christians in the country. Unable to decide after several months of prayer, he decided to apply the words of the foundress of the Focolare movement, Chiara Lubich: “When you are looking to follow God’s will, and you hesitate between two things, choose the most difficult one and ask God, if you are mistaken, to put you back on the right track”. “So I decided to go talk to the bishop about becoming a priest, only as a service, to, in a way, help fill the gap of global vocations. And I was very happy about it.” But everything changed when a couple of days later, Paul was offered to come live in the Focolare community. “It was as if the sky had suddenly cleared of all clouds. To me, this phone call, from someone who knew nothing about my doubts and hesitations, was God's way of telling me what to do."

Perhaps because of his personal experience, Paul today understands more than before the importance of consecrated life intrinsically linked to laity. “We are not called ‘consecrated laity’ for no reason. The Focolare movement is ecclesial, and as such has also religious and clergy members, but most of the members are families or lay people. One of our objectives is thus to help laypeople become capable of assuming their responsibilities within the Church – to form a “mature laity”.’ As such, the consecrated Focolare communities need at least two married consecrated members to be complete. They have to be a “community window” on the world, which helps them to have a different approach than priests or religious men and women. 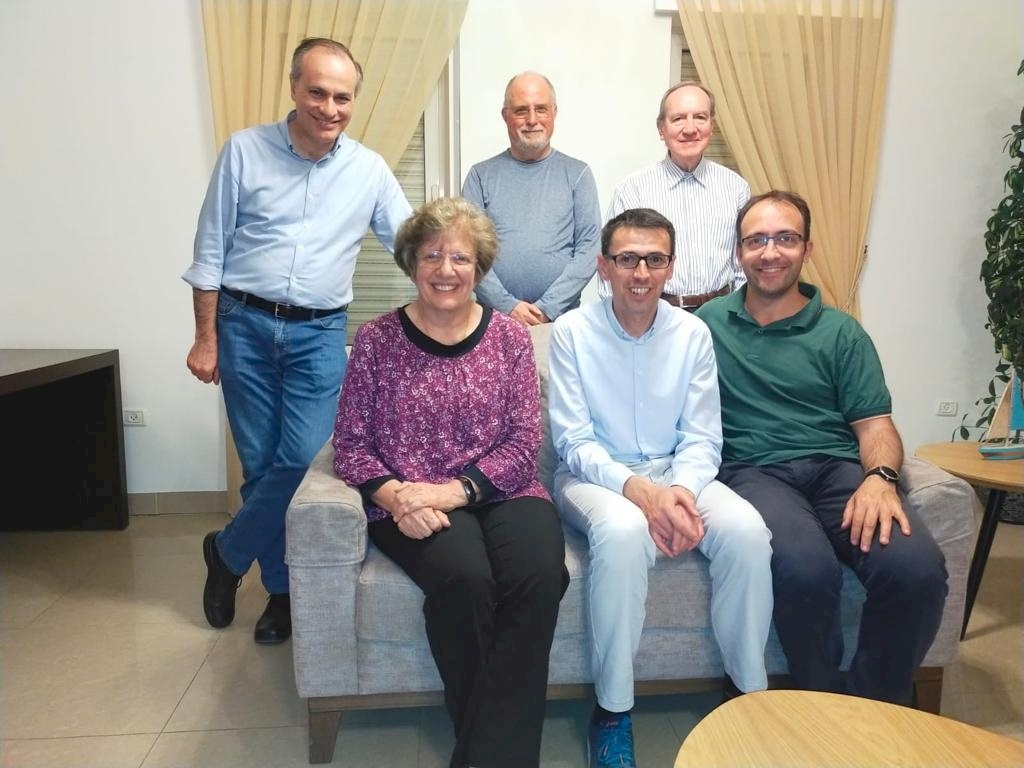 Paul and other members of his community receiving the visit of the first Lebanese Focolare consecrated member.

“I felt this particularly during the last Pentecost Vigil, which was organized by new communities and movements, at the initiative of the Patriarch and on request of a family from the Emmanuel community,” Paul continues. “Now that I think about it, it also reminds me of something said to me by Cardinal Duval of Algiers when I decided to become consecrated. After hearing my story, he said to me, ‘There is as much need for vocations like yours as for vocations to the priesthood.’”