Deir Rafat: Celebration of the solemnity of Blessed Virgin Mary, Queen of Palestine

Deir Rafat: Celebration of the solemnity of Blessed Virgin Mary, Queen of Palestine Available in the following languages:

DEIR RAFAT – On Sunday, October 27, 2019, at the Marian Shrine of Deir Rafat, about two thousand faithful gathered from all over the region to celebrate the solemnity of the Blessed Virgin Mary, Queen of Palestine.

It is a heartfelt feast in Palestine, which every year brings together thousands of faithful from every corner of the Holy Land. Yesterday’s celebrations were no exception. The feast was established by Patriarch Luigi Barlassina who, on the occasion of his solemn entry into the Basilica of the Holy Sepulcher on July 15, 1920, consecrated the Diocese to Mary, invoking it for the first time with the title “Queen of Palestine”. About seven years later, he wanted to have a shrine built in Deir Rafat, an Arab Christian village west of Jerusalem, in honor of Mary. The title of “Queen of Palestine” was then officially recognized by the Sacred Congregation of Rites in 1933.

At the Eucharistic celebration presided by Archbishop Pierbattista Pizzaballa, Apostolic Administrator of the Latin Patriarchate of Jerusalem, was attended by several concelebrants: Bishop Giacinto-Boulos Marcuzzo, Fr. Hanna Kildani, Bishop emeritus Kamal Batish, Fr. Ibrahim Shomali, Fr. Pietro Felet and Bishop Jean-Pierre Delville of Liège. The latter accompanied from Belgium a delegation of Knights and Dames of the Order of the Holy Sepulcher who attended the celebrations in the front row, together with a local group of Knights and one from Canada. The rectors of the two seminaries of the Diocese also concelebrated: Fr. Yacoub Rafidi, rector of the Patriarchal Seminary of Beit Jala and Fr. Francesco Voltaggio, rector of the Redemptoris Mater Seminary in Galilee.

In addition to the thousands of lay faithful who came to the event, there was also the presence of many religious men and women, including the Sisters of Bethlehem, of the Assumption of the Virgin and of Saint Bruno, who serve in the Sanctuary and who helped organize the event.

The Liturgy of the Word was rich in references to the Blessed Virgin Mary: the first reading, taken from the Acts of the Apostles (1, 12-14), recalled the episode of the Apostles’ return to Jerusalem after Jesus’ ascension into heaven and the common prayer that they did with some women including Mary, “the Mother of Jesus”. The second reading, taken from the Apocalypse (11.19; 12.1; 1, 3-6, 10), described the great sign that appeared in the sky: ” a woman clothed with the sun, with the moon under her feet, and on her head a crown of twelve stars and she gave birth to a son, a male child, destined to rule all the nations”. The Gospel of Luke (Lk. 1, 41-50), narrated the episode of the encounter between Mary and St. Elizabeth, with the words that we find in the prayers of the Hail Mary and the Magnificat.

The homily of Archbishop Pizzaballa, Bishop Marcuzzo recalled the fifty years of marriage of Romano and Giovanna Di Capitani, from Italy belonging to the group of volunteers of the Holy Land “Mar Yussef” who for over 25 years, in Deir Rafat, set up the party of Mary Queen of Palestine. The “Shepherds” choir from Beit Sahour, directed by George Salsa, animated the Mass together with the seminarians from Beit Jala.

Like every year, at the end of the Mass the beautiful procession followed the statue of the Madonna “protector of Palestine”, led by the festive procession up to the Sanctuary.

Almost a hundred years after its establishment, the solemnity of Mary Queen of Palestine still represents a very significant moment for the faithful of the Holy Land and for all believers who aspire to achieve lasting peace for these peoples. 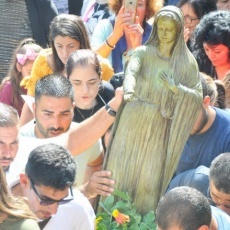