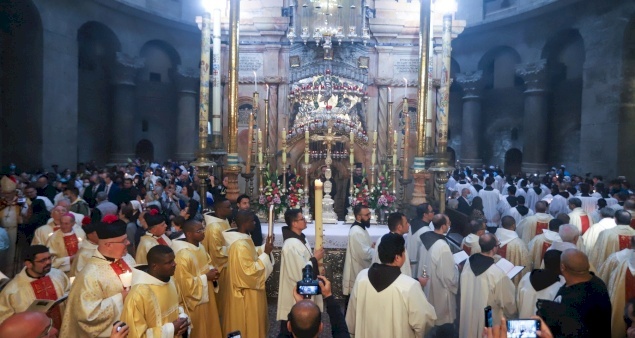 JERUSALEM - Commemorating what gives meaning to the Christian faith, that is, that life will always triumph over death, Easter Sunday 2022 served as a conclusion to a Holy Week that saw the return of pilgrims: it reminded us, after two years of COVID-19, what a celebration in the land of Christ is really like.

Echoing the Jewish festival of Pesach, which celebrates the Jewish people's liberation from slavery in Egypt, and which this year began on April 15th (and ends seven days later), Easter is the most important feast of the Christian religion. It represents the victory of life over death, the triumph of hope, justice, and the promises of Christ. It is the fulfillment of all the prophecies mentioned in the Bible, those of "the God of the living and not of the dead" (Matthew 22:32; Luke 20:38; Mark 12:27).

Presided by His Beatitude Pierbattista Pizzaballa, Latin Patriarch of Jerusalem, who was accompanied by Mgr William Shomali, General Vicar for Jerusalem and Palestine, the Franciscans of the Custody and many diocesan priests, the Mass took place in the morning in the Holy Sepulchre, after a solemn entry during which the Patriarch and his procession, escorted by scouts, went to the Tomb of Christ from the Latin Patriarchate.

In Jerusalem, although the Easter Vigil is celebrated on Saturday, before the rest of the world, the Easter Sunday Mass remains a moving celebration, the last of Holy Week taking place at the Holy Sepulchre. This year, due to the status quo that governs the Holy Site, the Orthodoxes, who share the custody of the place with the Latins and Armenians (as well as with the Copts, Ethiopians and Syriacs), celebrated their Palm Sunday during the Mass, in the back of the Basilica. Their calendar does not coincide with that of the Latins: the Orthodox Church refers to the Julian calendar (sometimes revised Julian) and not Gregorian. This year, their Palm Sunday thus took place a week later than ours, which led to a mixture of Latin chants and bell chimes ringing throughout the entire Holy Sepulchre. Fortunately, it was possible to follow the course of the celebration through booklets distributed by the Franciscans... and thanks to the Patriarch's homily being available in writing.

"Christ is risen! Alleluia!" declared Mgr Pizzaballa after the Gospel reading, centering his message around the real significance of Easter for Christians. "We believe that Easter is the final, definitive intervention of God in history, for everyone. It is the most unexpected and the most surprising intervention. We believe that after having saved us from oblivion, from slavery, from exile, God also had to save us from one last enemy, which is death – that is, sin.. [...] Today we believe and announce that God the Father, in the risen Christ, has made room in the life of each of us, forever. The resurrection is the breaking of His life into ours. Today, we say that we believe this. "

Concluding with a procession around the Aedicule, during which the crowd, illuminated by smiling faces finally free of surgical masks, surrounded the Patriarch to receive his blessing, the Mass ended in a festive joyous atmosphere, with the scouts escorting Mgr Pizzaballa back to the Latin Patriarchate.

Happy Easter to all!