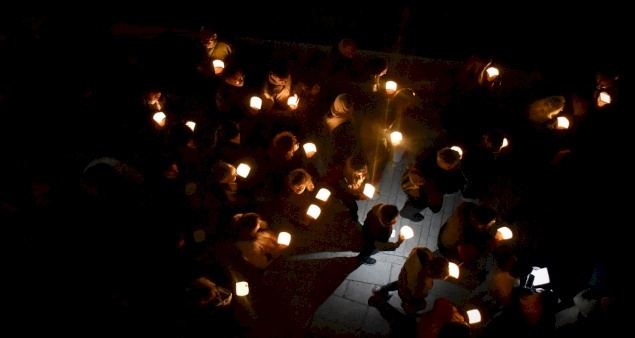 JERUSALEM - During Holy Week, if the best-known celebrations take place mainly at the Holy Sepulchre, there are many others organized by the city's many Christian communities. Characterized by their diversity, they take place in places that are sometimes unknown but always rich, and allow both foreign pilgrims and locals to experience a unique and exceptional Holy Week, specific to Jerusalem.

Everything can begin at Saint Peter in Gallicantu. On the evening of Holy Thursday, a beautiful mass is celebrated in the church, which is built over the dungeon where Christ is said to have spent the night while waiting to appear before Caiaphas. With the communities of the White Fathers and the Chemin Neuf (who run the Ecce Homo guest house on the Via Dolorosa), the Assumptionists and the Oblates of the Assumption organize an annual Holy Week shared between the places where their three communities live: the holy place of St. Peter in Gallicantu, the Ecce Homo convent, and the church of St. Anne, located near the Lions Gate.

This Holy Thursday mass is followed by a procession from Gethsemane to St. Peter, during which the faithful, with their faces lit by a candle, walk up the road that runs along the Jewish cemetery of the Mount of Olives, Silwan and the Tomb of Absalom. Once at St. Peter, they come to meditate in the crypt, or on one of the most sacred places of the site, open only that night: the stone staircase, which Christ is said to have trodden on during his Passion. This is the only time of the year when one can access it.

On the other side of the old city, in the church of Saint Simon and Saint Anne, the community of Hebrew-speaking Catholics of Jerusalem celebrated, in addition to a magnificent Mass "In Ceona Domini" on Holy Thursday, a Good Friday Liturgy preceded by an adoration of the Holy Crown of Thorns. At the end of the very touching celebration, Fr. Benny Di Bitonto, the parish priest, poured anointing oil on the palms of the faithful, to recall the embalming of Christ after his death on the cross.

On the side of the Vicariate for Migrants and Asylum Seekers, many communities organized their own celebrations, often because of their schedules, which require them to work on Sundays. Thus, after the Palm Saturday of the Indian and Sri Lankan communities, then the Way of the Cross of the Konkani-speaking Indians, the Malayalam-speaking Indian community, a language that is spoken in the south of the country, celebrated their own Easter Mass in the Capuchin monastery: a celebration of the Syro-Malabar rite, established in the region of Kerala, India. This rite is the equivalent of the Eastern Syriac rite.

On Saturday, April 16, the Dominicans of the EBAF celebrated their Easter vigil at the Basilica of Saint Stephen, welcoming for the occasion more than a hundred French-speaking pilgrims, including several groups from Africa. During this magnificent and moving celebration, a young father received baptism; then, according to tradition, before parting, all the faithful were joyfully invited to come and say before the altar "Christ is risen, yes He is truly risen" in all the languages they knew.

The following day, Sunday, April 17, the Benedictine Brothers and Sisters of the Abu Gosh communities celebrated their Easter Sunday in the medieval church of St. Mary of the Resurrection, with a mixed of regulars, volunteers and pilgrims. Presided over by Fr. Louis-Marie, the mass was sung entirely by the monks and nuns, under the direction of Br. Olivier.

In his homily, Br. Brice spoke of the mystery and the unknown of life as "Risen", which neither Lazarus, nor the daughter of Jairus, nor the widow's son really experienced: they "only turned back and knew the privilege of dying twice". To this day, only the risen Christ has been able to "abandon that part of the former man", "to enter into a new world that has kept from the old world only that which is most beautiful, that which deserves eternity" and which, thanks to Him, we are called to join.

After a festive lunch, where the bread prepared by Sr. Marie-Judith was shared by all, an egg hunt was organized inside the magnificent garden of the Abbey, for the greatest joy of both young and old.

To discover the photos of the celebrations