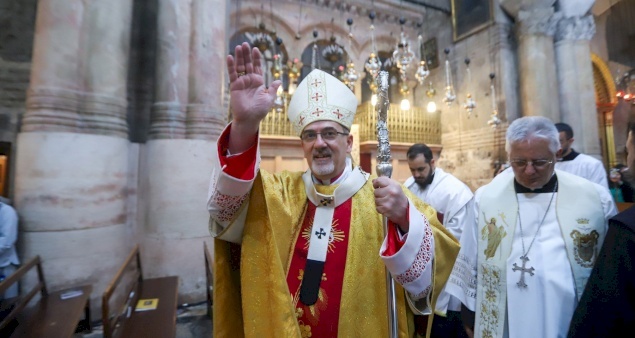 Easter 2022: Holy Saturday, the Eve of Easter Available in the following languages:

JERUSALEM - On Saturday, April 16th, His Beatitude Pierbattista Pizzaballa, Latin Patriarch of Jerusalem, celebrated the solemn Mass of the Easter Vigil at the Basilica of the Resurrection of the Holy Sepulchre.

This morning, His Beatitude Pierbattista Pizzaballa left the Latin Patriarchate in procession, escorted by about thirty Franciscans and fifteen priests of the Patriarchate, to enter the Holy Sepulchre for the Easter Vigil. He was accompanied by Bishop Adolfo Yllana, Apostolic Nuncio for Israel and Cyprus and Apostolic Delegate for Jerusalem and Palestine; Bishop William Shomali, General Vicar of the Latin Patriarchate for Jerusalem and Palestine; Bishop Boulos Marcuzzo, Vicar Emeritus; and Fr. Piotr Zelazko, Patriarchal Vicar for the Hebrew-speaking community (Saint James Vicariate). Around His Beatitude were also Canons of the Holy Sepulchre, including the two invested this winter.

In total, more than a hundred priests and religious were assembled around the Aedicule to announce the Resurrection of the Savior.

In his homily, despite a difficult international and local context, His Beatitude invited the faithful to welcome this news with joy and hope: "Since Easter, the Risen Christ has been present and at work in the world; and where the living and ecclesial faith of the disciples welcomes him, a new world truly begins, even in the midst of the contradictions of the present."

During the prayer of the faithful, a sister recited a prayer in Ukrainian, in support of the conflict raging in the country: "Let us pray for the Ukrainian nation bravely defending its country. May God inspire all the political leaders in the world to find the way to end this terrible war."

At the end of the celebration, the faithful, including many pilgrims this year, cheered the Patriarch in the square of the Holy Sepulchre, before the procession, opened by the kawas, composed of priests and Franciscans, returned to the Patriarchate accompanied by the rhythm of traditional Easter hymns.

At 3.30 pm, a solemn entry of Mgr William Shomali was followed by a solemn procession.

Solemn Vespers were then celebrated by the Franciscans at 6 pm, before the Pontifical celebration of the Divine Office at half-past midnight, near the Edicule, presided over by Fr Francis Patton, Custos of the Holy Land.