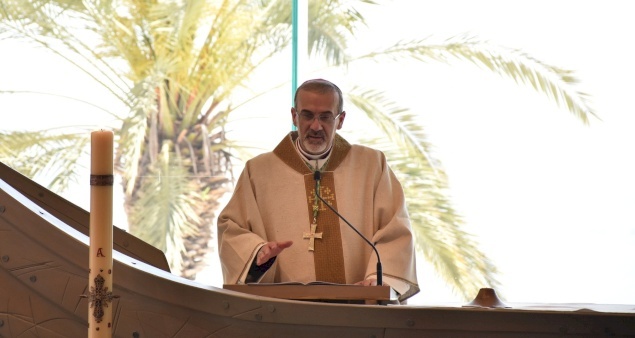 Feast of Mary Magdalene 2021: Homily of Patriarch Pizzaballa Available in the following languages:

May the Lord grant you peace!

We have listened several times to the Gospels of the resurrection and the stories of the Risen Jesus’ first appearances during these days. All accounts have something special of their own. Still, in all of them, two points reappear and are, in a small way, the red thread that unites them: Mary of Magdala as the first person to whom the Risen Lord appears, and sending the incredulous disciples to Galilee or to all people. They are two essential points of Gospel narration regarding the resurrection. There may be additions or changes, but these two points are present in all, one way or another.

The Gospel just proclaimed is that of Mark, who is more concise. For some, it is even a later addition. The passage announced summarizes the resurrection stories of John the Evangelist. We are, however, trying to understand what the Gospel passage communicates.

The Fathers of the Church make another approach, to Eve “A woman first tasted death, but in Mary of Magdala a woman first saw the resurrection; this is to testify that the woman could not carry the guilt of the transgression among men in perpetuity” (Bede the Venerable).

With the passion and death of Jesus, the disciples lost faith, except for the Mother of the Lord. Mary of Magdala, therefore, is the one through whom God, through the encounter with the Risen, reconnects with the men. Why Mary of Magdala?

She is the symbol of the unfaithful bride that God calls back to intimacy. In the Old Testament, there are many images through which God calls to himself and forgives the unfaithful bride (Hosea, Jeremiah, Ezekiel speak of the infidelity of the bride, but also God’s forgiveness). The announcement to Mary of Magdala is the announcement of the forgiveness of the unfaithful man, of the man who once again with the crucifixion of Christ said “no” to God. Mary of Magdala was possessed by seven demons. Seven is a symbolic number and indicates fullness. In other words, Mary of Magdala was truly immersed in sin. We don't know what kind, but sin had become a constitutive part of her life. But her encounter with the Lord freed her, forgave her, saved her. She represents, in short, sinful and forgiven humanity. That is the reason for the appearance to Mary of Magdala. We could not be represented by the Virgin Mary because she has always remained faithful; she is without sin. Mary of Magdala is, therefore, the one who represents us. On the Cross, the Mother of the Lord becomes our Mother, while after the resurrection, Mary of Magdala is the one who introduces us to the encounter with the Risen One and makes us access forgiveness. The alliance of God with man, in conclusion, is restored in the meeting of Jesus with Mary of Magdala.

She is also an image of the Church. The Church that the fathers of the Church called “Casta Meretrix,” saint and sinner, is represented by Mary of Magdala. The Virgin Mary is a mother of the Church and our Mother, as the Council reminds us. On the other hand, Mary of Magdala is a figure of the Church, which is composed of sinners but is at the same time reconciled with the Father from the presence of risen Christ.

The Risen One, encountering Mary of Magdala, meets the unfaithful but forgiven bride, sinful humanity but in need of mercy. She reconnects the bond with the disciples who had broken with the crucifixion and death of Jesus. The apostles’ difficulty believing in the resurrection needs witnesses in the same league, who are like them, like Mary of Magdala.

The Magdalene, however, (but we see it above all in the Gospel of John), is not only the forgiven sin. She is also the woman who holds in her heart the desire of Jesus and searches for Him alone. In John’s Gospel, after the two disciples found that the tomb was empty, they returned home (20:10), while Mary remained in the garden, still searching for the Lord. She didn’t give herself peace; she didn’t give up. Her insistence on seeking the Lord was repaid by the encounter with Him, who then called her by name. Jesus is first found by those who have their hearts turned in search of him. He did not go first to the incredulous disciples but to Mary of Magdala, who was in search of his body, considered lost. In the Gospel, we see first of all with the heart, an open heart, and then with the eyes. The eyes recognize what the heart has already welcomed.

The other point of the resurrection stories, we said, is the sending to Galilee and the people.

The resurrection cannot remain a closed act in itself. It is the heart of our faith and the culmination and the sense of the whole life of Jesus. And it is intended for all men.

There is irony in this Gospel passage. Those men whom Jesus scolded for their disbelief are the same ones sent to preach his resurrection to all the people in the world.

The Apostles needed witnesses like them, sinners like them, like Mary of Magdala, who was possessed by seven demons, but who was saved by the encounter with Jesus. So, the men of that time and today need witnesses like them, sinners like the Apostles and as we are today. Jesus needs normal men, sinners, but at the same time happy to have met the treasure that has upset their lives. Ordinary people, but who have the full flavor of life, of the resurrection. May they become by themselves witnesses of something greater than them.

In short, the path is clear, and Mary of Magdala expressly indicates it to us: to recognize ourselves as sinners; meet Christ and allow oneself to be forgiven by him; love him; recognize him alive in us; testify.

If we do not recognize ourselves as sinners, we do not need Christ and the forgiveness of God to which he alone gives us access. We can’t even love him because we don’t feel the need for him, he’s a presence that doesn’t communicate anything to us, and so we have nothing to witness except ourselves.

But if we recognize we are sinners and allow him, with humility, to forgive us, we will have access to his love, to his life that will break into us, and that alone will become an announcement. Rediscovered salvation is the lost-and-found drachma of the Gospel of Luke. Once found, the woman calls all her neighbors to rejoice; she can’t keep her joy (Lk 15:9). One cannot retain a great joy for oneself; it must be communicated.

Let us ask ourselves how much Mary of Magdala represents us, and she is our figure. Do we recognize ourselves among the forgiven sinners? Does our life explode with joy for the salvation we have experienced? Do our hearts burn with the desire to meet Christ? Or are we not rather like the disciples of the Gospel, closed in the cenacle in mourning and crying? (v. 10).

We are all here together to ask Mary of Magdala to intercede for us and introduce ourselves to the joy of the risen Christ. May it become our proclamation here, today, and in daily life. 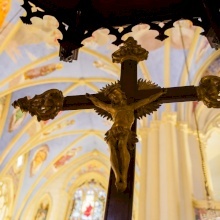 Homily for the Feast of the Exaltation of the Holy Cross 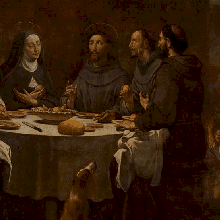