Feast of the Palestinian Saint Mary-Alphonsine 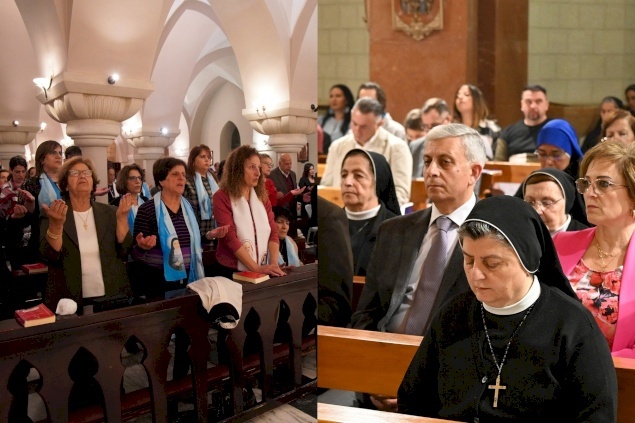 Feast of the Palestinian Saint Mary-Alphonsine Available in the following languages:

HOLY LAND – On the weekend of November 18th & 19th, 2022, the faithful attended Mass to celebrate the Palestinian Saint Marie-Alphonsine Ghattas, who founded the congregation of the Rosary Sisters. Mgr William Shomali, General Vicar of the Latin Patriarchate of Jerusalem, presided over the two Masses held respectively in the Church of our Lady of Fatima in Beit Sahour, and in Our Lady of the Rosary in Mamilla, Jerusalem.

On Friday, November 18th, Palestinians from the region of Bethlehem gathered together for the first time at the church of Our Lady of Fatima to celebrate the feast of Saint Marie-Alphonsine. “Truly, she is a humble Saint. She served our community with love and faithfulness in the Holy Land; she taught Christianity in schools in the Arabic language, and she was the first to do so,” says a local from Beit Sahour. “We are honored to live on the land that this Saint grew up on,” she added.

In Jerusalem, where the Saint was born, the faithful celebrated the Saint, through whom Mother Mary founded this Holy congregation. With the sisters, they expressed their gratitude about what God has accomplished through her. “Humility, silence and reverence towards both the Mother of God and Jesus is what the life of Marie-Alphonsine taught me, strengthening me in my Christian faith… And because she was born here in Jerusalem, I feel close to her,” said Doris, who attended the second Mass celebrated in honor of the Saint on November 19th, in Mamilla

In his homily, Mgr Shomali compared God’s definition of greatness to the world’s definition, saying: “The rich, celebrities and politicians are praised by the world, but in God’s eyes it's those who are meek and humble, who serve Him and commune with Him in prayer, and most importantly who love their neighbors like themselves who should be praised.” The two greatest commandments God gave us is to love our neighbor like ourself, and to love God with all our hearts (Matthew 22:37-39). “This is how our Saint Mary-Alphonsine lived, in service to God and the people of this Holy land, serving in different cities for 35 years. She is our daughter, the daughter of Jerusalem,” Mgr Shomali added while emphasizing the footprints she left on this land. “She lived what she taught and taught what she lived”.

To see all the pictures of the celebration, click here.