"From me comes your fruit": Episcopal ordination of Mgr Rafic Nahra, Patriarchal Vicar for Israel "From me comes your fruit": Episcopal ordination of Mgr Rafic Nahra, Patriarchal Vicar for Israel Available in the following languages:

NAZARETH - This Saturday, April 30th, 2022, in the Basilica of the Annunciation in Nazareth, Father Rafic Nahra was consecrated bishop of the diocese of Jerusalem by His Beatitude Mgr Pierbattista Pizzaballa, Latin Patriarch of Jerusalem. A great joy and a source of rejoicing for all religious and laypeople of the Church, whether of the Holy Land or elsewhere.

The appointment, which was revealed on March 11th, 2022, had already caused great rejoicing. Today, it became a tangible reality with the rite of episcopal ordination, celebrated by the Patriarch and two co-consecrators; Mgr William Shomali, General Vicar for Jerusalem and Palestine, and Mgr Thibault Verny, auxiliary bishop of Paris. Among the co-celebrants were also Mgr Adolfo Tito Yllana, Apostolic Nuncio to the Holy Land, Patriarch Emeritus Michel Sabbah, and Fr. Francesco Patton, Custos of the Holy Land.

"Today, dear Rafic, you too are given by the Church the mandate to shepherd the flock of God. Today you too are being united to the mission of Peter and the Apostles, that of becoming the first witness of the Risen Lord," the Patriarch said at the beginning of his homily. It is the word "father" that he used to describe the role of the bishop; father to the priests, father to the faithful. "Do not confuse "fatherhood" with simple "friendship". The father is more than a friend. Being a father involves knowing how to generate: first of all the faith, but also the life in the Church," he added, insisting on the complementary roles that each one can play within the Church, and citing the synodal journey desired by Pope Francis, centered on listening and participation of all.

A crowd of different communities, united in this moment of joy, and reflecting the journey of Father Rafic attended the ordination: members of the Saint James Vicariate and the Vicariate for Migrants and Asylum Seekers (VMAS), priests of the Diocese of Paris, laypeople, religious and consecrated persons from all over the Holy Land... All applauded loudly at several moments of the celebration, and in particular when Mgr Rafic received his episcopal attributes and was welcomed into the episcopal body. At the end of the Mass, after having blessed the crowd and addressed a speech of thanks to all, the new bishop was surrounded by a crowd of faithful who came to congratulate him. 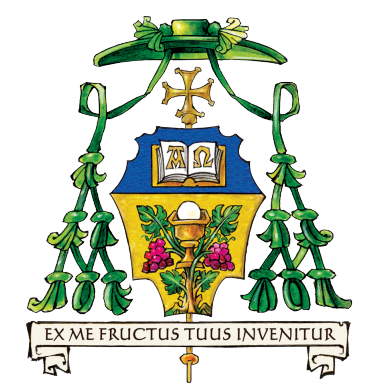 The emblem and motto of Mgr Rafic Nahra: "From me comes your fruit" (Hosea, 14:9)

This moving celebration will be followed by another, on May 6th, in Bethlehem; that of the episcopal ordination of Father Jamal Daibes, appointed at the same time as Father Rafic and Patriarchal Vicar for Jordan.